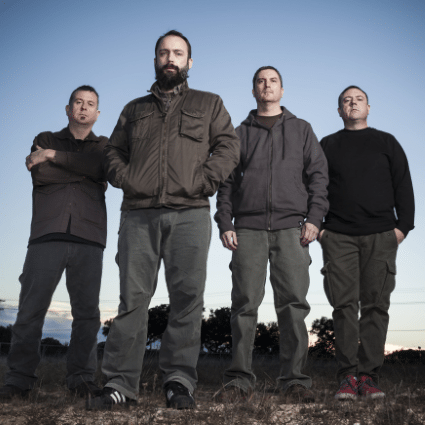 Maryland groovers Clutch have been bulldozing audiences around the globe for over 20 years now in a neverending touring cycle. Finally the band achieved commercial success with the innovative album Earth Rocker in 2012. Its follow up release Pyschic Warfare has built on the strengths of its predecessor and has led to yet another encompassing global journey. Drummer Jean-Paul Gaster kindly chatted to me ahead of their show at Manchester’s legendary The Ritz venue.

I started by asking JP what his first musical memory was, as the band’s catalogue illustrates a diverse range of musical influences. “I remember seeing ZZ Top as a very young man,” he said, “perhaps 14 years old. That made quite an impression on me.” At the other end of the spectrum, he recalled “seeing Buddy Rich Big Band on public television.” Having picked up on jazz tendencies in his playing, this came as little surprise to me. “ZZ Top, Buddy Rich, AC/DC, Elvin Jones; It was all music to me.” It seems there’s as much diversity in his taste today as ever; “I always listen to other genres, to be honest there is not a lot of heavy music going on when I am listening to music. There are at times. I very much like listening to jazz, to reggae. I love the blues.”

After enjoying unprecedented success from Earth Rocker, its follow up is too often a band’s downfall. I questioned JP on whether the weight of its predecessor lay heavily over the recording of Psychic Warfare. “It kind of came out of the gates even stronger than Earth Rocker, which for us was a great surprise. We are also very proud to have it released on our own label. To have a good first week is amazing but to have it on your own label is so much more gratifying.”

Clutch are about to surpass a quarter of a century in existence and yet the same line up has remained constant and unified. On the band’s longevity, JP commented “I can’t really say what defines the Clutch sound. For me it has always been evolving. That’s what makes it so beautiful to be in this band. We very much learned to play our instruments together, we have developed a vocabulary with one another that I think is unique from all the other bands out there. It is something that we continue to explore and we continue to hone. I think that we are better songwriters than we were in the early days. We are certainly better players. To be honest it’s even more fun than it was back in the early days.”

Having toured with strong supporting acts, I wondered whether they ever felt their age. I asked JP if that kept Clutch on their toes and ensured that they upped their game in the live shows, especially on a long touring cycle where it would be easy for complacency and predictability to set in. “It is certainly inspiring to play with acts like Mastodon,” he said. “I remember taking those guys out when they first started as a young band. Although I think that the sound that they make is very different from Clutch, the mentality and the musical sense is very close. I think that we are cousins in a way. I have a lot of respect for those guys.” Despite this, it seems the band does not require some threat from below to keep things fresh. “We still have something to prove and that’s what we do every night. That’s my job. I hope that I am not at my peak; I hope that I’m getting better. I hope that we all are.”

It seems that what really keeps Clutch fresh is that their hearts have always been in the right place. “When we started the band, the intention was to play music,” he states, bluntly. “We had two main goals and those where to play good shows and to make good records. We did not think that we would be able to do this as a career; that was not on our minds. We are lucky enough to be able to do that now. I think part of the success and part of the appeal to the people that come to see us is that we still subscribe to those two goals. It’s not about being a rock star, it’s not about trying to make a million dollars. It’s not even about trying to play huge arenas. It’s just about making rock ‘n’ roll for the people that want to hear it.”

There was never a doubt in my mind regarding the sincerity of this mission statement, because the passion with which JP discussed his craft was truly intoxicating. Even in answering my question regarding his life outside of music, his mind was brought back to his beloved instrument of choice. “I have a garden and my wife and I spend a great deal of time in there. We love to grow tomatoes especially and hot peppers. I do think about drums every day though,” he admits, with an almost bashful chuckle. “It is difficult for me to step away from it. For me the drums is a unique instrument that you need to think about it every single day. You have to be present in the moment, you have to be listening to music you have to be thinking about the drums.”

Clutch are quite rightly self-assured at this point, but have never fallen back on old tricks and seem as invested in music now as they were 25 years ago. Truly, they have mastered the art of never looking back. “That’s the story of being a musician,” JP muses. “You create what you can create the best that you can-in that moment. Then you move on and you try to do something else.”