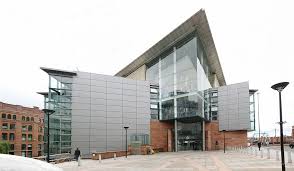 Live: Superheroes of the Silver Screen

The Hallé Orchestra gave the Bridgewater Hall an evening of cinematic magic with their performance, Superheroes of the Silver Screen.

With just two and a half hours of rehearsal that very morning, conductor Stephen Bell, along with the help of vocalist Dean Collinson, treated the audience to thirteen iconic film scores, making a welcome departure from the countless Christmas concerts which lace the festive season. An orchestra of 90 musicians recreated classics such as Danny Elfman’s Batman Suite, Vangelis’ Chariots of Fire, and my particular favourite, Steiner’s Tara’s Theme from Gone with the Wind.

It is important to note that this was the first ever experience I’ve had of live classical music, and I absolutely loved it. I feel the Hallé Orchestra have been branded with the unfair and highly believed stereotype of only being suitable for those who are educated in music or come from a higher class. Thankfully I was very wrong. I can think of many films which wouldn’t be anything without their scores—without the help of Hans Zimmer, Pirates of the Caribbean wouldn’t have made it to a sequel. Orchestral music is fully ingrained within pop culture in this regard and, by awakening the philistine’s unknown appreciation for it, this concert proved the perfect introduction for the uninitiated.

Joining the orchestra was vocalist Dean Collinson on his Hallé debut, who also performed during the set. A very animated performer, Collinson sang James Bond’s Thunderball and From Russia With Love, as well as ‘I Wanna Be Like You’ from Disney’s The Jungle Book.

It was the perfect concert for film lovers with all composer bases covered, whether that be John Williams, John Barry, or James Horner. Horner’s Apollo 13 added some slight surprise to the performance, with solo trumpeter Gareth Small situated at the very back of the auditorium, adding a spatial quality to the music. Conductor Bell added a few facts to the night’s entertainment, a particularly touching yet ironic note being that James Horner in fact died in a light aircraft crash earlier last year.

The orchestra then granted the audience to an encore. With The Incredibles being one of my favourite films you can imagine my sheer joy when the orchestra erupted the room with a medley of Giacchino’s score for the animated masterpiece. Adding to the excitement, apparently the composer himself was present in the audience.

Stemming from that evening’s entertainment the Hallé Orchestra were hosting an evening of ABBA complete with costumes and four soloists the next night. I only wish I’d got tickets to see that too.