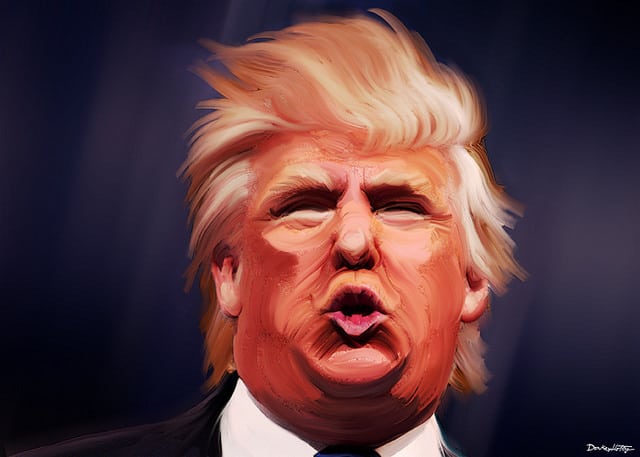 Trump: To ban or not to ban?

Over the past few months, Donald Trump has been somewhat of a sensation. People either love him or hate him. In my knowledge, with most people it’s the latter. Whether you agree with his politics or not, he has undoubtedly drawn attention to the US Presidential campaign and the alarming political apathy in the States. His rise in popularity has been remarkable, hitting 41 per cent in a recent Republican voter poll versus Ted Cruz’s 19 per cent.

In a Google search of ‘Donald Trump ban’ one of the first things that comes up, alongside the fake claim that Justin Trudeau had banned him from Canada, is the online petition that accumulated nearly 600,000 signatures wanting to ban Trump from entering the UK. This then made its way to Parliament for a three-hour debate in the House of Commons on 18th January. Although I would agree this is an excellent example of MPs listening to public opinion and acting on it, it seems absurd that the issue would even get debated, particularly since there are other important issues that need addressing in the Commons.

To some extent I can understand the reasoning behind wanting him banned and not having to confront him. To put it mildly, his policy of wanting to build a wall as a way of preventing Mexicans from entering the US is questionable, prompting The Telegraph to write a fact-checking article about his opinions on Mexican immigrants.

There is a fundamental issue, however, that I take with wanting to ban him. If the ban had got through Parliament, who would be there to question his views? Who would be there to mock his outrageous statements? Some of these views have caused numerous publications to write top ten countdowns of his most controversial comments. With a figure like Trump who has the ability to incite such debate, and include some of the most apathetic members in society to engage in the political sphere and conversation, surely it is a prime opportunity to challenge him and invite him to defend such views?

Any election is important, but the post-Obama years in the States will be particularly vital because there are issues that have become ever more prevalent since his election in 2008. Most notably police brutality and racial tensions, laws and the role of the infamous National Rifle Association. It is crucial, therefore, that Americans do not get swept up in the popularity of Trump, and instead think about who will be a sensible candidate to attempt to solve such deep-rooted problems in American culture.

Banning him will not change his popularity, instead it might add fuel to his campaign. It would only add to his condemnations of overly politically correct societies. It will not solve the damage that David Frum, in The Spectator, says he is doing to the Republican Party, either. He argues “the events of 2015 have horribly confirmed all those warnings, as Donald Trump chomps down one respectable Republican candidate after another.” Banning him would therefore be a wasted opportunity to highlight Trump as the unreliable candidate he is. Importantly as James Brokenshire, Home Office minister, argued, it could have damaged relations with our most important ally.

It seems there is a dominant practice in universities at the moment of banning figures deemed controversial or offensive that has transferred onto the political landscape. To some extent I understand a decision to not pay a speaker, such as Milo Yiannopoulos, to highlight that the university does not endorse what he says, even though it was still extremely difficult to get him allowed on campus.

To ban someone from entering the country, however, seems a step too far. It stifles debate around someone who seems the most obvious figure to start a debate about, seeing as his views are so distasteful to many people. He should be given the opportunity to defend them, because no matter how offensive someone’s views might be, they are allowed to have them.

Cutting off contact with Donald Trump by banning him would not make the problem go away. Instead, it would worsen the issue by halting an opportunity to challenge his views and force him to justify himself, which is surely the democratic and logical step, particularly if the whirlwind that is Donald Trump continues to unfold. Ultimately, he is showing no sign of cessation.