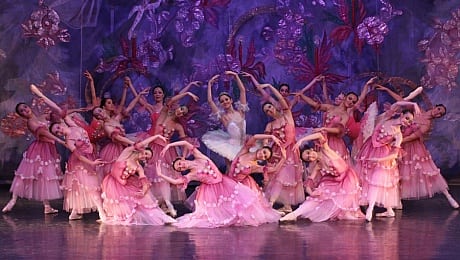 A somewhat out-of-season performance of The Nutcracker from the Moscow City Ballet seemed like the ideal remedy for the post-Christmas blues and the long plight promised by the famously tedious month, January. I have been enchanted by ballets from being old enough to point my toes, and have thus obsessed over countless TV performances, perhaps earning me the status of an ‘amateur expert’, if you like.

Having never been fortunate enough to experience this Christmas classic live, it was an exciting prospect being swept into Clara’s whimsical world, especially by a Ballet Company from the homeland of the elegant practice: Russia.

The infamous ballet The Nutcracker began as ‘The Nutcracker and the King of Mice’, a book by E. T. A. Hoffmann, but is perhaps more famously known for its adaptation into the high-energy yet precise ballet, which features agile jetés and complicated pas de deux sequences that should resemble a piece of art for all present to admire.

This particular modern rendition of The Nutcracker features in the Company’s 25th Anniversary tour (which also includes renowned masterpieces such as Romeo and Juliet and Swan Lake); but for those slightly less familiar with the plot than us self-confessed ballet geeks, The Nutcracker is the tale of a young German girl, Clara Stahlbaum, who receives a Nutcracker as a Christmas present. However, during Christmas Eve night, her Nutcracker doll springs to life and engages in a fierce battle against the Mouse King with seven heads. The ethereal plot allows for the ballet to weave in elements of the enchanted as well as aspects of mystery, leaving the audience in awe of the prodigious dancers.

After the tense atmosphere peaked to a crescendo, the ballet opened with a vibrant party scene, where the stage was crammed with dancers, perhaps leaving room for errors in timing, and resulting in the appearance of a disordered and cluttered mis-en-scene. However, the audience’s attention was diverted to some extent by the meticulously hand-painted set that framed the stage, which indeed did capture the essence of the Christmas theme. The stage’s centre piece (a colossal, decorated tree), which dominated the stage, appeared to make the dancers look unimaginably small, compromising their athleticism. Likewise, the protracted onstage festivities resulted in a loss of the exuberant atmosphere and was dulled further by the audience witnessing flexed feet within dances that wouldn’t have looked out of place in a musical theatre production.

It seemed that the first act was lacklustre in the grand nature of ballet, and it felt as if a tangible pang of disappointment was present within not only me, but what felt like the whole of the auditorium. Despite this, the memorable saviour of the first act was Talgat Kozhabaev—The Nutcracker, who exerted great strength and finesse, making fouetté turns appear utterly natural and landing grand jetés as quietly as you’d like. Yet Kozhabev also possessed the ability to become remarkably stoic, in true doll form, switching between fluid movement and mechanical marches seamlessly.

After the short interval, the second act opened in a forest occupied by the corps de ballet ‘flower fairies’, who were adorning wonderfully intricate tutus and were placed delicately in lines along the wings.The pastel pink coloured costumes complemented the scenery pleasantly, as well as highlighting Clara in her first solo. During this, Anna Ivanova (Clara) seemed like a changed ballerina, exerting pure elegance and inspiring the now mesmerized audience.

Clara’s dream continued into the haunting sphere of the Mouse King, where the live orchestra embodied the mood of danger and anticipation flawlessly, echoing Tchaikovsky’s beloved and charming score, which matched the sharp, contracted movements of the Mouse King’s loyal rodent companions. Again, the stage was saturated with the chorus dancers; however, this time the choreographic decision accentuated the overwhelmingly tense nature of the scene by awakening a sense of sheer horror within Clara. Once the heroic Nutcracker had defeated the Mouse King and rescued his Clara, we were escorted around the world in the form of short but exceedingly amusing trios. A particular favourite was the passionate, crimson clad dancers representing España!

Once the lively excitement had drawn to a close, Clara was transported from her dream world in the arms of her cherished Nutcracker and was laid down before the Christmas tree once more, where reality resumed, much to the audience’s dismay. Upon bows, we were treated to a display of the coruscating costumes for one final time, before the magic of The Nutcracker was sealed away for another night.