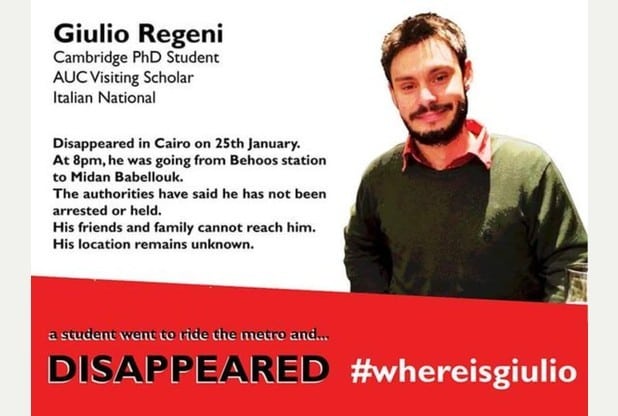 Photo: Where is Giulio Regeni campaign

Almost 5,000 academics from across the world have signed an open letter protesting the death of an Italian student in Cairo.

On examination of his body, an Egyptian prosecutor said that Regeni had suffered cigarette burns, bruises and knife wounds. The Italian newspaper La Repubblica reported that he had been systematically beaten, with both his finger and toenails pulled out, in a torture method security forces normally reserve for suspected spies.

On Sunday, in shock at the details of a second autopsy on the body, Italy’s Interior Minister said that Regeni’s fate had been “inhumane” and that his treatment was “something animal.”

Regeni had been missing for nine days. He had disappeared on the 25th January, the fifth anniversary of the Egyptian uprisings against former President Mubarak, which was under heavy police presence across Cairo.

According to The Guardian, reports show that between August and November 2015, 340 people were forcibly disappeared by security forces. Human’s rights groups across the world have decried Egypt for an appalling record of repression and human rights abuses in the post-Morsi government.

In the past, Regeni has written critical articles of the incumbent President Abdel Fattah al-Sisi and his government. Regeni’s Ph.D. research in the region had centred on formation of independent trade unions in post-Mubarak Egypt. Allegations accusing the Egyptian security forces of Regeni’s death have come in thick and fast. However, Egypt’s interior has rejected all such accusations.

The authority’s letter says they are “appalled to hear there were extensive signs of torture” and raises concern about the broader political situation. “[Regeni] vanished in the midst of a security campaign that has resulted in mass arbitrary arrests, a dramatic increase in reports of torture within police stations, and other cases of disappearances, according to local and international human rights organisations.

“While we welcome the Egyptian authority’s statement that they will fully investigate Giulio’s death, we note that according to Amnesty International, bodies reporting to the Egyptian interior and defence ministries routinely practise the same kinds of torture that Giulio suffered against hundreds of Egyptian citizens each year.”

The letter calls on the Egyptian government to cooperate with an “independent and impartial investigation into all instances of forced disappearances, cases of torture and deaths in detention during January and February this year, alongside investigations by criminal prosecutors into Giulio’s death.”

Concerning the situation, Dr. Carl Death issued The Mancunion this statement: “The murder of Giulio Regeni is a tragedy for his friends and family, and for the academic community of which he was a part. He was conducting important research on a politically sensitive topic—trade unions in Egypt—and whatever the actual reasons behind his death, there is a growing realisation that Egypt is a very difficult and often dangerous place to do research on these important questions.

“Fieldwork is a vital part of the social sciences, and it is often a formative and rewarding (and deeply enjoyable) aspect of becoming a researcher. There are many pressures that make such fieldwork harder and harder to do, and the appalling death of Giulio reminds us all of the risks that it involves.”

Last week, in a blog post, Dr. Tanja Mueller wrote: “Maybe we will never know what really happened on the night Giulio disappeared—a night full of heavy policy presence in Cairo because of the protest anniversary date, if he was simply at the wrong time in the wrong place, or whether his ‘disappearance’ was part of the government crackdown on those who look behind the scenes and fight for their freedom and rights. Giulio’s research focused on a topic that has become sensitive in the climate of fear that dominates in the country: trade union and labour rights.

“He might thus have been targeted deliberately like the many Egyptians who fall foul of a detention policy whose main feature is the secrecy around those who simply vanish without traces – without the wider world taking much notice, usually. As a tweet on the University of Cambridge twitter-feed that announced Giulio’s death stated: ‘Welcome to the daily routine of living in the Arab world…'”