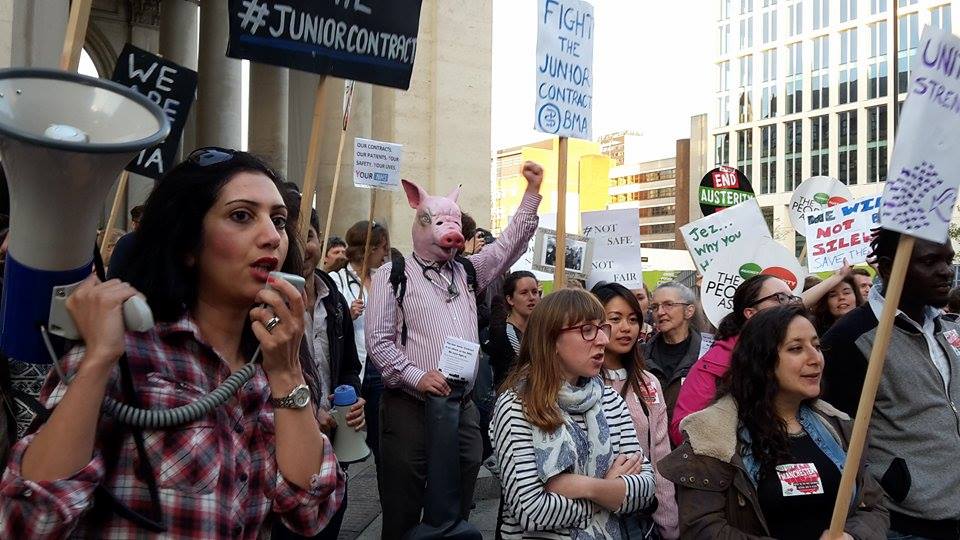 The junior doctors's strikes are set to continue on Wednesday 10th February. Emergency backup will not be put into place for this strike. Photo: The Mancunion

Junior doctors to walk out again

An all-out junior doctors’ strike is set to take place on Wednesday 10th February. This strike follows the last one on the 12th of January, where more than 4,000 operations were subjected to cancellation. The 48-hour strike set to start on 26th January was called off after talks between the British Medical Association (BMA) and the government. Antagonisms between the two still exist, however, and the BMA have made clear that the February strikes will go ahead unless “concrete proposals” are discussed.

The Mancunion set out to consider what the strikes meant to Manchester medical students and junior doctors and how they feel towards recent government proposals.

A third year medical student at the University of Manchester told The Mancunion: “It makes me angry that it’s all revolved around politics now. At the end of the day if doctors are overworked then they’ll make mistakes, which could have fatal consequences for patients, and then instead of helping people like we set out to do, we’ll end up harming them. I just hope that when I graduate there will be a safe NHS to work for.”

The issue of patient care and the negative implications of longer working hours on doctors’ capacities to perform to their full potential has been a common matter raised throughout the entire campaign. James Adams, a third year medical student stationed at Wythenshawe Hospital told The Mancunion: “The changes in the junior doctor contracts suggest removing the penalties that stop doctors working unsafe hours, and classing Saturday and evening work as ‘normal hours’.”

Adams explained that whilst the government is stating that there is an 11 percent increase in basic salary (for a junior doctor after six years of study at medical school this is currently £23,636, almost £4,000 less than the national average) , “the cuts to the pay for night-time and weekend work will mean the majority of doctors will be facing pay cuts”.

The major difference between the strike in January and the upcoming collective action in February is that the latter will be a “full walkout,” with no planned emergency backup being put into place.

Max Thoburn, a junior doctor in Manchester and a spokesperson for the campaign, told The Mancunion that the disputes concerning junior doctor contracts have been going on for over three years. When the government refused to concede to junior doctors’ demands, the BMA withdrew from the negotiations, leading Jeremy Hunt to bypass discussions and announce the implementation of the new contracts for August 2016.

Consequently, when a ballot was held by the British Medical Association, 98 per cent of junior doctors voted in favour of industrial action. Thoburn states “it should be made clear at this point that no doctors ever wanted to strike but we felt that to allow such a contract to go through would be so damaging to patients, our profession and the NHS in the future that any disruption caused would be minor in comparison,” says Thoburn.

He further highlights the larger issue of the NHS staffing crisis. According to him, the contracts proposed by Jeremy Hunt will only push more people away from working for the NHS: “Doctors would be the first to welcome increased staffing levels—the staffing crisis in the NHS is well documented—but we simply do not currently have the doctors to cover these extra shifts.

With this in mind, the last thing that we need is a contract that disincentives people from joining the profession and pushes out many who are already qualified, either tempted abroad or into lucrative private sector jobs.”

Thorburn added that it was “with a heavy heart” that he had to take part in strike action next Wednesday “as I have seen that it is the only way to achieve progress, not only to protect my own quality of life, but as part of a much wider battle to protect the NHS for generations to come.”

Adams also expresses disappointment in the government, stating that the continued disputes surrounding junior doctors’ contracts are jeopardizing the future of the NHS: “The NHS is the jewel in our countries crown and Europe’s largest employer. If we lose the staff which hold it together then we also lose it. I don’t know about you, but I don’t want to live in a country where healthcare is only for those who can afford it.”

Concluding his statement, Thoburn emphasizes the importance of public morale on the days of the strike and encourages public engagement with the junior doctors’ cause.

If you wanted to hear more about the action occurring on the 10th February there is a campaign group on Facebook under www.facebook.com/MeetTheDrsMcr in order to keep up to date with developments surrounding the strikes.