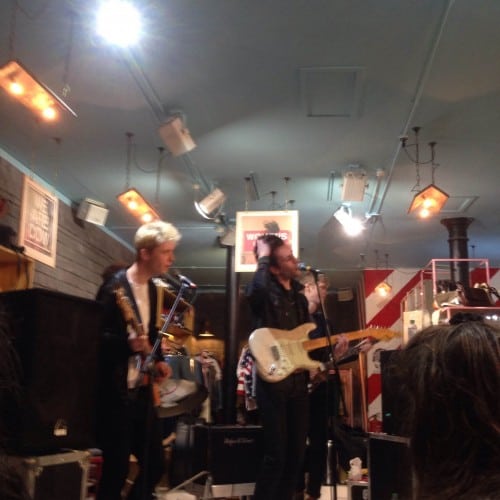 Last week Vitamin brought their buzz to COW vintage shops, performing intimate gigs across the north of England. The Leeds based indie-rock quartet Vitamin first formed in 2014 whilst at college, but have known each other since they were 12. Since leaving their studies to pursue their passion for music, they have received regular airtime on Huw Stephens Radio One show and played Leeds and Reading Festival BBC Introducing stage, gaining a large following.

Vitamin signed to record label National Anthem last year releasing their first two EPs, Giving It Up and To Believe, following in the steps of Haim and The Orwells. Vitamin have also set up their own club nights along with launching their own live residency at Brudenell Social Club. Recently touring with Sundara Karma and Rat Boy, this is the bands first headline tour.

Taking to the stage last week in Manchester’s COW vintage shop, they played a short but fruitful set. Despite the short set, Vitamin brought old and new releases including Need Air, Giving It Up, Miss You and To Believe. Front man, Jared Laville’s enthusiasm could not go unnoticed as he captivates the whole room, encouraging the audience to clap along.

With their catchy riffs and choruses, it is impossible not to dance along to these groovy, upbeat tracks. Performing in such an intimate environment seemed quite appropriate for the type of band Vitamin are. The well loved COW vintage shop appeared more like a music venue, creating a unique atmosphere in the shop.

It is obvious the room is filled with fans who have supported them from the start and new listeners, all standing in admiration of this bands energy on stage. After announcing free merchandise being given away along with the give away of tote-bags, the audience swarm to the back of the store to collect their free merchandise. Once the show was over, the band welcomed fans to get signings and have photos taken. There is a genuine charm and appeal to these boys that shines through in both their stage presence and their interaction with the audience.

Catching up with the band after, they tell me about the music that inspired this four-piece to pursue careers in music. The band have grown up with a wide-range of genres, all influenced by different musical backgrounds. Guitarist Cameron Frasers “grew up on a diet of The Clash and Ian Dury.” The band as a whole found common interest in bands such as The Maccabees, Foals and Bombay Bicycle Club. Drummer Theo Cookson was influenced by steel pan and R&B music. Now finding influence in other areas of music, such as techno music with the likes of Ben Klock,
the band are already set to play Live at Leeds, The Great Escape and Lost Village Festival. Once they have finished touring, they are set to release of an album later this year – 2016 is already shaping up to a big year for these boys!

Check out their latest single, ‘This Isn’t Love’.