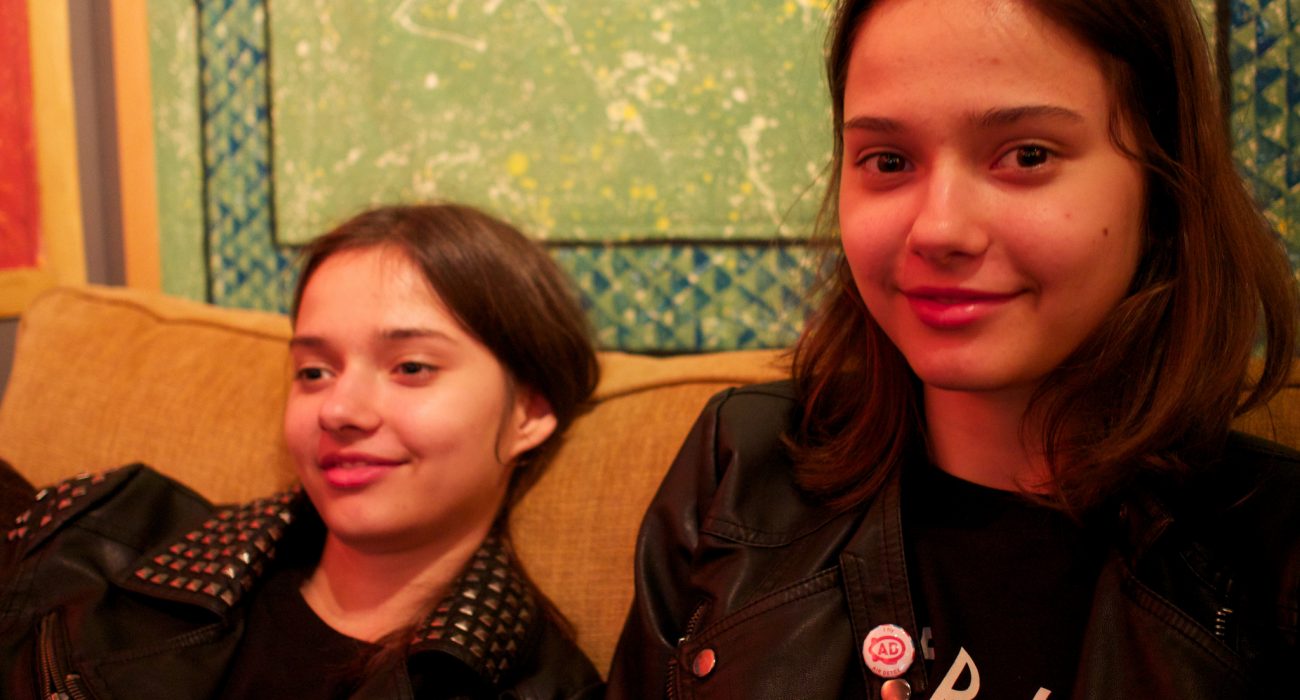 The teenage twins Sonia and Anna Kuprienko are a highly inspired duo, developing a distinctive ‘dark-pop’ sound forged from their own experiences and connection as twin sisters that adds a unique connection that other groups cannot replicate. “It certainly does create a unique musical connection. We feel each other like no one can. On stage we can predict when one of us will screw things up. We can read each other’s minds, so words are irrelevant, and only music is very much needed.” Furthermore, the girls do not see their music as a burden upon their sibling relationship but quite the opposite in that any frustration coming from their musical endeavours is “really healthy. And it helps us to find a beautiful melody and music.” Their relationship allows for an intricate understanding of each other musically that can be seen in their interwoven harmonies and songwriting as their ideas don’t require a time-consuming interpretation of each other’s lyrics.

More than anything, the twins have fashioned a seemingly unbreakable bond in their formative years, having moved from their native Ukraine to the UK at the vulnerable age of just 15. They were separated from their parents and their familiar surroundings and relied on each other to succeed in their passions. The moved to London, and despite it being a “crazy decision”, it was really one that made sense for them, as they became indulged in a scene where their own inspirations came from. “We always loved British music, even though we couldn’t understand the meaning. It was a crazy decision to move to London, but it was easy to decide, as it was our biggest dream. We always wanted to create music in a country where our favourite bands were from.” Maybe as a result of their bold decision to move to London, the inspiration and environment enabled them to move forward with their music and let it reach people—even at such a young age.

However, perhaps more formative to Bloom Twins’ drive and determination, is the unrest in the Ukraine that erupted in early-2014 which “pushed us to act and not just dream.” Perhaps it was this that gave them real meaning and emotion to their dreams of achieving success in music. During the heat of the conflict, they released the single ‘Get up Stand up #WeAreUkraine’, a cover of Bob Marley’s classic about empowerment and emancipation. A powerful record that perfectly sits with their ‘dark-pop’ genre, and a sound symbolic of the song’s message of keeping up the fight—despite there being a strong sense of sorrow and despair. “Our home country is the biggest inspiration, it was a choppy moment in our lives and we wanted every single Ukrainian all over the globe to unite. Even though we were all in different countries and cities we wanted to be one, to come together for those people who were standing on Maidan for their rights.” One can’t help but notice the maturity of the twins and wonder whether it was the conflict in their homeland that inspired and formulated their unique sound; something they were quick to confirm. “Of course it affected us! We write dark pop music ‘cause it resembles what we felt when our country was [sic] going through a pretty dark period. It also resembles how we felt when we moved to London at the age of 15 without parents and not knowing the language. We miss Ukraine. It is always in our hearts.”

The girls are currently supporting Duran Duran on their UK arena tour, something they describe as being “pretty surreal”.  Of course, it does beg the question as to how on earth a young fledgling pop duo from Ukraine ended up on tour with a group of new wavers on somewhat of a nostalgia tour? “The relationship started when Nick Rhodes photographed us for Untitled magazine, then he was at a Christmas party where we performed. To skip a bit forward, we spent a day in a studio together and now 8 songs later—we are on tour.” So far, Bloom Twins have released three singles, a solid foundation to build on for sure. There are plans to release more material in the not-so-distant future with a “single in February, and soon after—[an] EP”. However, they do not plan on rushing out material just to satisfy a growing interest in their music as “it’s very important to get everything right and tight.” Again, showing a maturity beyond their years, if Bloom Twins continue with such a hardworking yet perceptive attitude, they are likely to continue with the success they are already carving out for themselves.