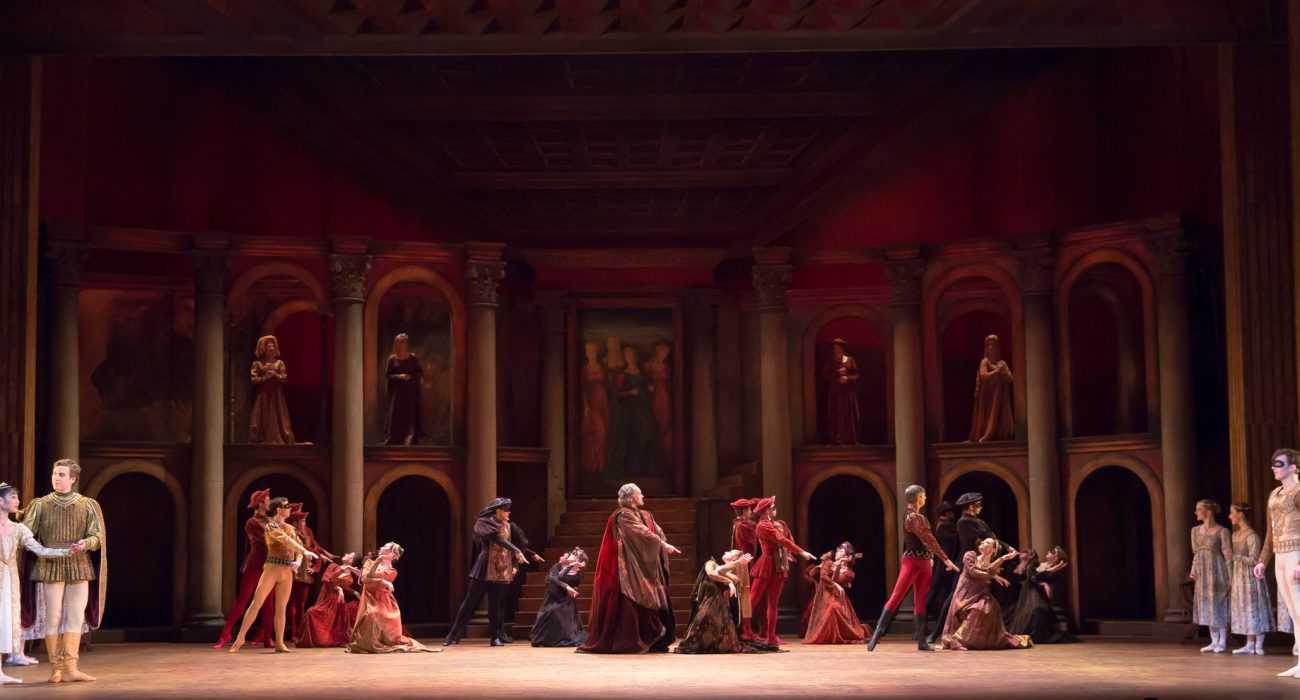 The Birmingham Royal Ballet’s 2016 Shakespeare celebration brought the infamous tale of the most infamous ‘star-crossed’ lovers to the Lowry theatre and did not disappoint. Kenneth MacMillan’s adaptation, set to the Prokofiev score, was beautifully dramatized—accompanied by a wonderful set, it transported the audience to Renaissance Verona.

Act I perfectly sets the scene for the audience, even those not firmly familiar with the story, as an audience, we are dropped among the sparring Capulets and Montagues who sport different colours; both as opulent as the other. The drama of the expertly choreographed sword fights which are timed to perfection immediately demonstrate the drama and tension to come throughout the following couple of hours. We see Romeo (William Bracewell) and his friends laughing and joking throughout the first act, and young and naïve Juliet (Yaoqian Shang) unimpressed with the young man her parents want her to marry. However, the first meeting of the pair at the Capulet masked ball oozes chemistry and is the beginning of their secret-filled love affair. The act ends with the infamous balcony scene, which expertly uses the set to its advantage, yet doesn’t lose any of the secluded romance which is so familiar.

The romance is however tragically short-lived. The drama massively intensifies during the second act, which mostly takes place among the bustling market. Romeo’s friend Mercutio and Juliet’s cousin Tybalt fight extremely dramatically—ending in the tragic death of Mercutio. In a fit of rage, and revenge, Romeo kills Tybalt, and as a result is banished from Verona, and from his love. The tension is palpable as the curtain goes down for the second short interval, although it seems to provide a natural break before the last act.

The overall performance of undoubtedly one of the most tragically romantic love stories of all time is a pleasure to watch. The choreography massively plays to the dramatic and tragic side of the story, and of the wonderful music—perhaps minimising some of the romance and sensuality. However, as a performance, all elements came together beautifully and captured the audience from the start.

A previous version of this article stated that Cesar Morales, who was not dancing that night, played the part of Romeo. This has been amended accordingly.