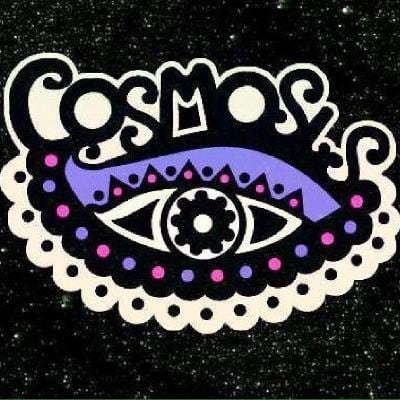 Cosmosis Festival has come a long way. Last year it was held in the pokey student Mecca of Antwerp Mansion, whereas this year saw it grace the cavernous halls of Victoria Warehouse. As well as this, the line up this year was stratospheric, making it a must for any paisley fiend or hirsute shoegazer in the Manchester area and beyond. It is testament to the gravitational pull of headliners Brian Jonestown Massacre, the Jesus and Mary Chain, and Sleaford Mods, that it was an excited Mary Chain fan all the way from Dublin who lent me his programme as we waited to collect our wristbands.

After sounding out the various stages and attempting to come to grips with the token system, youthful Manchester outfit Freakout Honey were my first foray into the woozy sound of Cosmosis. On the gratefully-heated Fire Stage, they took their glitter-laced surf-psych to some heavenly highs and set a precedent for the festival’s direction. The recent psychedelic revival has slowly seemed to mutate into a thicker, fuzzier, shoegazing existence, and as a result, everywhere you went, a barrage of guitars and effects pedals enveloped you. Despite this vogue, Freakout Honey were, in their best moments, more 13th Floor Elevators than My Bloody Valentine. It was in these more jangly songs that their ear for off kilter psychedelia was apparent.

Then, it was back into the warehouse (which was honestly colder than outside) and to the Earth stage, to see how one of the most vital post punk bands of the late seventies and early eighties held up live as the band members enter their own late seventies and early eighties. (That might be a bit harsh.) Nevertheless, I arrived at Wire expecting a tight, if eclectic, show. I left thinking that Cosmosis 2016 might well have peaked too early. I was prepared for the angular spiky punk of debut album Pink Flag, and they made my ignorance of their development show as they sent a cascade of unearthly atmospheric songs fizzing around the room. They began well but finished magnificently; it was indicative of the sheer power of their sound that other than the peculiar scrub in the fedora air-guitaring beside me, no one was moving a muscle. Dancing would only have distracted from the mind bending experience being thrust upon us all. The final 15 minutes of their show…I couldn’t tell you what they were playing, I wouldn’t be able to hum you a tune, but I do remember it being so loud and so affecting that I began to hallucinate melodies. A large column impaired my view, and I had to peek around it once to assure myself that no one on stage was embellishing the wig-out with some Gregorian chanting. At the end, everyone quietly filed out and, if they were anything like me, took a good 20 minutes outside digesting what had just happened.

If I’m honest, I was quite hard to impress for a period after that; I thought Uncle Acid and the Deadbeats sounded like the Darkness, which is all that needs to be said about that. The Raveonettes, of whom I’d heard rave reviews, had some promising moments early on, but started to bore with a succession of what seemed to be quite straightforward, countryish pop songs. I could see why lots of people were enamoured by them, but it took some chips, an in-depth discussion in the queue about the career progression of Daniel Radcliffe, and another trip to the cosy Fire stage to see The Altered Hours to raise my spirits. The best-received song from the quiet, Irish, indie sorts was ‘Sweet Jelly Roll’, (I say that, but it was the only one I knew so I sang along). The audience were fairly muted, but this was more a sign of appreciation than apathy, as they ranged from loud fuzzy numbers to more Swirlies-esque songs. As they came to the last couple of tunes, they should have taken no offence at their steadily thinning audience; The Brian Jonestown Massacre’s set loomed and they themselves might have wished they could have sloped off early to a good spot for one of the clear highlights of the night.

The Brian Jonestown Massacre thrilled with their quivering organs and retro psychedelic stylings, none more so than during ‘Anenome’, for which Anton Newcombe delegated vocal duties to a woman whom I couldn’t identify. She did a fine job of it, though, and the majority in attendance at Cosmosis spent a blissful hour in an ethereal ’60s trance. It was then quickly from the retro, to the blindingly current. Sleaford Mods have been knocking about for quite some time now, but it’s taken 7 albums for the listening public to align their tastes with what is a highly abrasive sound. Live, they were electric; if you haven’t heard any of their music before, just imagine if Slaves ditched the guitar, bought a Macbook, and weren’t utter bollocks. The minimal electronic beats combined with 47 year old Jason William’s impassioned diatribes against almost everything and anything resulted in a febrile atmosphere.

Getting on to 1 o’clock, there was no let up, as next on the Main Stage were the band most often compared to a washing machine, original ’80s shoegazers The Jesus And Mary Chain.  If I’m to be entirely candid, I was far too tired to make the most of this opportunity to see one of my all time favourite bands live. My head lolled about uncontrollably, and whilst we explored some of the Chain’s later work, my focus was on my aching heels. ‘Just Like Honey’ lifted me temporarily out of my slumber and I spent a really lovely two minutes with my head aimed upwards, singing along to one of the most beautifully simple songs ever written. My resurgence was short lived, however, and although I’m sure the rest of their set was equally sublime, my day had come to an end and I was off home.

My paisley detox is on-going.