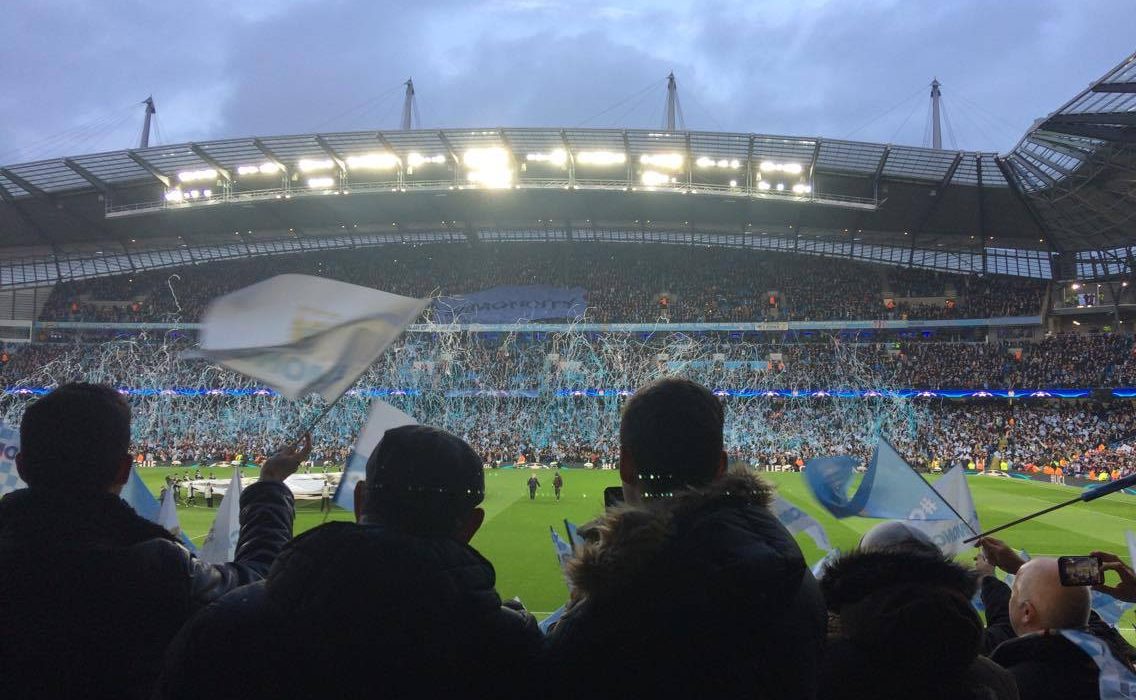 Manchester City have joined Real Madrid as the first two teams in the semi-finals of the UEFA Champions League 2016, after a very professional performance at The Etihad, where the whole team seemed to just click.

At the end of Fernando’s career someone will make a lovely compilation video with all of his highlights, and no doubt this game will feature heavily. After a questionable performance in the first leg last week, Fernando was all over the back pages due to his error being what led to Ibrahimović’s goal. However, over the last few weeks Fernando has been quietly getting on with his job and keeping City in and around the top four of the Premier League. Today he showed his class yet again in one of the biggest games of City’s history. With 62% possession, PSG were always a threat—especially in the second half—but Fernando was all over the field putting an end to most PSG attacks. His partnership with Fernandinho worked well, and he showed calmness on the ball, starting counter-attacks instead of clearing the ball to the stands like the crowd were bellowing for! “Can you hear the bells Fernando?” Well he can definitely hear the plaudits!

28th minute: PENALTY! Sergio Aguero was brought down by the goalkeeper in the box after Kevin de Bruyne played him in on goal.

29th minute: MISS! Aguero put the ball wide in a rare lapse for the Argentinian.

47th minute: SAVE! Ibrahimović may have had a quiet first half, but he burst into life in the second half—his first effort was a fantastic effort from a 25-yard free kick. Joe Hart was down to make fingertips to the ball.

75th minute: Eliaquim Mangala raised the stadium to their feet in appreciation, after he slid in from distance to clear the ball and stop a PSG counter attack!

76th minute: GOAL! Mangala’s tackle gave City another bite at the cherry—and it worked in spectacular fashion! After some neat play around the box, Kevin de Bruyne received hold of the ball on the edge of the box and curled a shot in past the goalkeeper’s left hand!

79th minute: SAVE! Joe Hart completes a hat-trick of fantastic saves, this time after Edinson Cavani shot. The English number one jumped into action and palmed the ball away in his classic star-fish formation.

85th minute: OFFSIDE! Zlatan Ibrahimović finally got the better of Joe Hart and put the ball in the back of the net… after being offside by five yards. The City back four kept an excellent line at the back all game, and Zlatan fell hook, line, and sinker for it.

Prior to the game, Manuel Pellegrini said that his side would lose the game if they intended to play for a 0-0 draw, so he would have his team play attacking football as they have during his time at the club to try and win the match. Pellegrini’s men did not disappoint, as City’s frontmen really turned on the style and fashioned some fantastic opportunities. Kevin de Bruyne, David Silva, and Sergio Aguero’s relationship upfront was scintillating stuff with neat one-touch football. With a performance like that, you have to wonder if they could have played blindfolded—they just seemed to know exactly where each other were.

However, it wasn’t the trio’s attacking play that caught the eye as much as their defensive display in the second half. PSG brought the game to City after the interval (like they probably should have in the first half), but all of the front three pressed high up the pitch on PSG’s midfielders, which often led to a pass back to the PSG goalkeeper.

Fernando was personally my choice for Man of the Match, but it would be quite easy to build a case for most of the City starting eleven to receive the award. Joe Hart made three fantastic saves; Nicholas Otamendi was strong and commanding in the back four; Gael Clichy yet again was solid at left-back; Sergio Aguero may have missed a penalty but along-side Kevin de Bruyne and David Silva they looked unstoppable at times; and of course de Bruyne himself by scoring the winner. However, one man to pick out above the rest was Eliaquim Mangala, as he yet again stepped up in a big game, despite the pressure he is often put under by the British press. Before the game, Chris Sutton said that Mangala lacked a brain—Mangala replied with a fantastic performance and a tweet thanking Sutton for the motivation. The French centre-back was confident and strong in a match that many would have expected him to buckle under pressure in! Zlatan Ibrahimović is often described as one of the best strikers in the world, and rightly so, but today Eliaquim Mangala came out on top. Tomorrow, Mangala may consider removing the Swede from his back pocket.

Stat of the Match

City only had 38% possession all game, somewhat surprisingly.

Nobody would blame the City fans for being nervous prior to the game; this is unchartered territory for them! But after a few chances in the first five minutes, the fans quickly got over their nerves and made the ground a fortress against the Parisians.

City’s good luck charm worked wonders again, as the City fans boo’d the UEFA Champions League theme song before the game. Pellegrini hinted in his pre-match press conference that the booing may be a good luck charm for City.

And, a personal favourite chant from the evening was “shit Andy Carroll” chanted at Ibrahimović.

“It’ll be exactly the same”—Manuel Pellegrini on the prospect of playing Pep Guardiola’s Bayern Munich over any other team in the Champions League semi-finals.

History in the Making

City aren’t in the best of form in the Premier League, and are battling it out for a top four place instead of the title that they are usually fighting for, and yet their Champions League performances this year have been professional, stylish and effective. Sevilla away, Borussia Monchengladbach at home, and Dynamo Kiev away have all been especially good performances—not to mention City’s 2-2 draw in Paris last week. With this in mind, there will be a quiet voice in the back of City players’ and city fans’ heads just whispering that “City may win this!”, despite Laurent Blanc describing City as a guest at the Champions League semi-final party.

The draw for the semi-finals of the Champions League will take place on Friday. Real Madrid have joined the blues in the draw. In the words of James Blunt, maybe City will get a… semi by the sea. That’s what he means by that lyric, right?