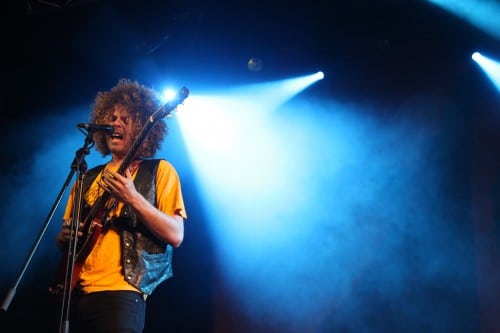 A psychedelic rock concert is not something I thought I’d be going to any time soon but alas, at Manchester Academy on the 9th April I bore witness to probably one of the best concerts I’ve ever been to.

I’ve been listening to the adventurous high notes and impressive range of Wolfmother’s music for a while now, but part of me was sceptical about how I would find Mr Andrew Stockdale in live performance.

However, I was pleasantly surprised by the quality of singing in his live renditions of songs on their new album, Victorious, and the consistency of energy maintained throughout the whole show.

The Australian three-piece bounced from track to track, serving a wide range of material from several different albums. From the highly charged and vibrant ‘Woman’ and ‘Gypsy Caravan’, to the more mellow ‘White Unicorn’, during which you could feel the intensity in the air.

I must give, in particular, a special mention to how touching it was when the frontman pulled a dad and his son from the crowd onto the stage. For fear that they were getting crushed at the front, he let them stand on the side of the stage for the remainder of the show—good on you man!

As the night went on, Wolfmother didn’t let the sweat slow down the mood, moving into ‘Dimension’ and ‘Colossal’, which absolutely took the roof off. I’d be lying if I said I didn’t get involved in a bit of cheeky crowd surfing—thats how good it was!

The band then walked off stage and everyone was left gagging for more, so Wolfmother returned with ‘Vagabond’ and, finally probably their best hit to date, ‘Joker And The Thief’, filling the crowd with a renewed energy.

We all know those bands who can’t help but disappoint with their live performance, but I have to say, Wolfmother was not one of those bands. I highly recommend going to see them when they next grace a venue near you— you’ll be in for a treat!