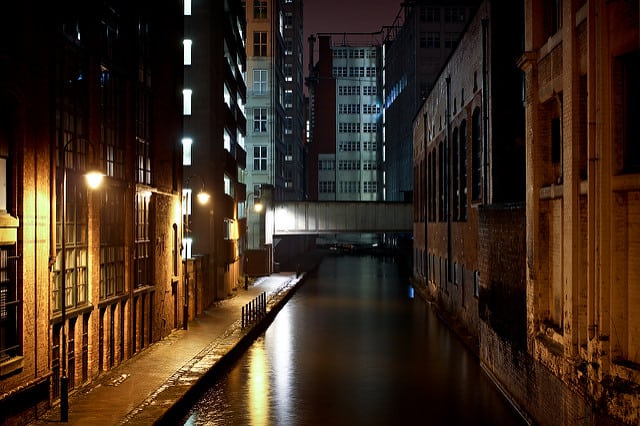 As a new student–or for any student–of this city, it may be easy to believe that everything one requires and desires can be found on the Oxford Road corridor (Oxford and Wilmslow Road). Tradition denotes that the escapes from this are to be made by shopping, leisure, or work. But stick to tradition and you just might miss out on something special.

To wander is to do many things. It is to walk without direction; to observe; to think or not to think. A wanderer may be finding hidden corners away from the crowds, or they may be inside the crowd, following its movements and seeing where it takes them. To wander is to take a step back—to feel comfortably out of place. By separating ourselves from the ways that spaces influence people, we can find a sense of freedom. This walking—this mere act of one foot in front of another—is of the upmost importance to shaping our perceptions of the cities we live in.

There have been many notable wanderers throughout history. Some of the most interesting involve various documentations of opiate-fuelled hallucinations and ramblings whilst getting lost in the labyrinth of London streets. Here, there is somewhat a connection to a lot of students. An intoxicated journey back from a Manchester club may intrude on an area that a sober self might perceive as dangerous. A phone or a group of people, rather than landmarks or memory, might well guide the first night of Fresher’s Week.

What are the reasons that we travel into the centre of town? One major activity is shopping. But in a scramble to visit the fashion highlights of Manchester, we learn little about the city. We experience the configuration of shops and other infrastructure (advertisement or indoor shopping centres, for example) but these structures remain unquestioned. By wandering, we can choose new routes that avoid the shops; we can see new, lesser-seen parts of the city; and we can take some valuable moments of calm. The wanderer is without a true destination (except, perhaps, home) and without specific goals to fulfil in the city.

An interesting debate in this subject is the blurring of the lines between public and private land: the privatisation of public space. Take the University itself. The spaces in-between buildings are privately owned and privately governed. As a consequence, the rights that one assumes on public land are not applicable.

This confusion between public and private space is best exemplified by the space outside City Hall, London—an area owned by offshore investment company More London and leased to the Council. In this space, actions such as taking photographs or gatherings of three or more people give More London’s private security the right to ask the offenders to leave the site. If the offenders resist, they may be charged with trespass.

Public spaces are vital to a city’s democracy. The freedom and ability to assemble helps to check the power of government. This assembly may be regarded as wandering en masse: a group of people defying the normalities of that space, with new political focal points.

Even as a lone-wanderer, the simple act of walking (and not shopping) through Exeter’s Princesshay Shopping Centre in 2012 might have caused a stir. The company that own the site were tracking people’s mobile phones to analyse patterns of shoppers’ movements around the site. A line that ran straight through the outdoor private space would buck the owner’s hopes of maximising consumers’ spending.

Some advocate trespassing onto private land as a good way to further experience the city. This practice is called Urbex. In Europe, private security guards outnumber police by 25 per cent. Urbex seeks to undermine this securitisation by exploring and documenting some of the spaces controlled by private security. Wandering might be considered a less-extreme version of this. By walking where you wish in a city and being blissfully ignorant of the lines between private and public space, one might accidentally stumble into somewhere that they are not meant to be. In that place, anything could happen. It could be somewhere tedious or it could create a passionate sense of wonderment within oneself. If asked to leave, a smiled apology may suffice.

Manchester, as lecturers may love to tell you, is full of history. But where can we experience this history? If one wants to get away from books and formal study, there are the museums of this city, many of them rather good. But non-formal study of history can escape the walls of museums. For example, along the route the People’s History Museum are rivers and canals that were important for this city’s industrial fortunes. Oxford Road traverses at least two of them. The travel to-and-from a place of learning is not an anonymous space; it may be full of the stuff of lectures, seminars, and museums.

I could go out into the city, take some serious notes, and be in a position to offer recommendations: The Top Ten Places to Wander in Manchester. But that would contradict the freedom and subjectivity of wandering. Go where you wish, for as long as you wish. Notice how your feelings and thoughts are influenced by the space around you. Make this city, or as much of it as possible, yours.