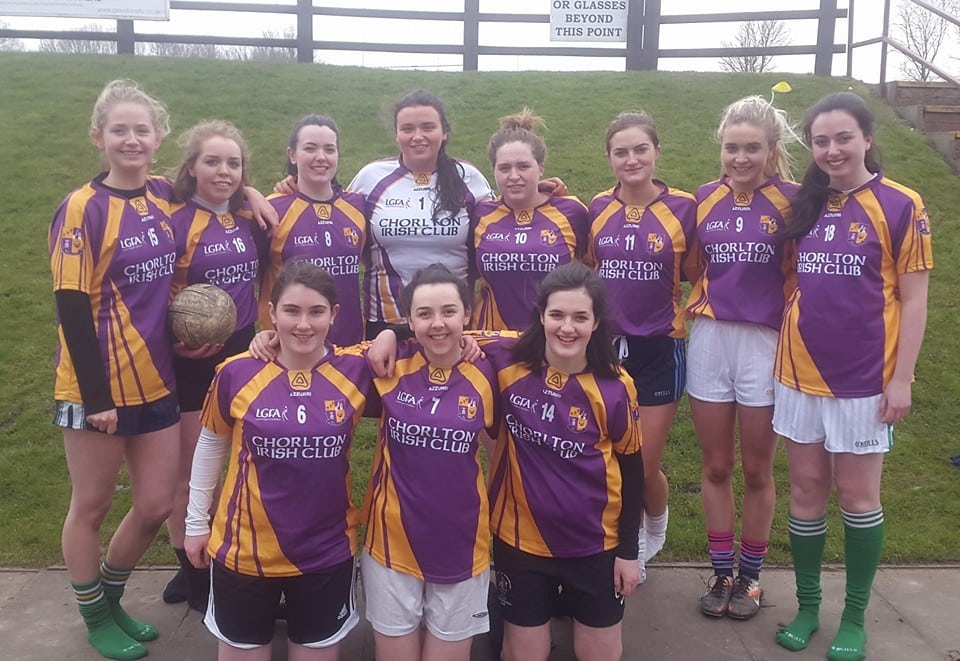 Gaelic football is at the core of Irish sport and culture. University of Manchester Gaelic Athletic Club aims to promote and develop the sport, reaching out to Irish students, students of Irish descent, and those who just want to try their hand at this fantastic sport!

Gaelic football is not like any team sport you have watched before; it is intense, fast-paced and exciting at every minute. The game is played on a rectangular grass pitch between two rugby-style posts with a round ball. There are two types of scores; a point is achieved by kicking or hand passing the ball over the crossbar; and a goal (three points) is scored by getting the ball into the net. The ball can be carried up the field, with an action being used every four steps—either bouncing, kicking, hand-passing, or soloing (dropping the ball and then toe-kicking the ball upward into the hands). Teams are 15-a-side and are usually made up of a goalkeeper, six defenders, six attackers and two midfielders. The game is governed by the Gaelic Athletic Association (GAA), set up in Ireland in 1884. More locally, our team takes part in competitions run by the British Universities GAA.

Last year saw the formation of the first ever University of Manchester Gaelic Football teams. With a bit of help from the MMU team and St Lawrence’s (a local team), we got training sessions going in Platt Fields, with a good number of attendees every week. The season kicked off in October with a 7-a-side tournament, where our new men’s and lady’s teams got their first chance to announce their arrival, playing against other local teams from the North-West.

While our men’s team have had to wait a little longer to play in the county league, our ladies team had a full calendar, with matches taking place on weekends throughout October and November. Our ladies even made it to the British Universities Championships, which were hosted in Manchester, and included some fantastic teams from across the country. While we didn’t win any trophies, we picked up lots of tips and strengthened ourselves as a team. Led this year by lady’s captain Roisin McCusker, and men’s captain Mark Boyle, we are ready to return to the 2016/17 season as a force to be reckoned with.

We are associated with current county champions, St Lawrence’s GAA team, based in Stretford, who have provided much support in lending us kit and equipment. They also provide extra training sessions for any of our members to attend, and a chance to play in both local and national leagues against clubs from across the country. This association means that we have a strong connection with the rest of the Manchester Irish community, and allows our players to socialise and train with some of the best and most experienced players around.

As you would expect from any Irish sports team, we have a great social side too. Starting last year with a couple of Welcome Week events to introduce those new to Manchester to the best Irish bars in town, we continued to meet up regularly for GAA, soccer and rugby matches. A very nerve wrecking Sunday was spent watching the All Ireland men’s final last weekend with a last-minute draw between Mayo and Dublin meaning a replay (and another pub trip) is on the cards in the coming weeks.  We saw 2015 out with the massively successful Christmas reindeer pub crawl, where our team of reindeers were challenged to a three-legged race around Didsbury, with lots of challenges along the way.

Of course, this was all build up to St Patrick’s night. We celebrated the biggest night of the Irish calendar in 256 Fallowfield with our hugely popular sell out Irish night, opening the doors to everyone to see how Paddy’s night is meant to be celebrated. This year will be no different, with our new social secretary Mary Deery planning a huge year of events in collaboration with the Irish Society. The year ended with our AGM where we announced the new committee, with Sinéad Pearce to take over as chair, and Lauren Magee as secretary. A highlight of the year had to be our nomination for Best New Society at the Students’ Union award night. We narrowly missed out on the title, but a great night-out was had, and we plan to return for glory this year.

Training sessions typically take place in Platt Fields on a Wednesday afternoon; Ladies training is 5-6, and Men’s training is 6-7. Sessions involve drills designed to improve fitness, ball skills and scoring, alongside match scenarios to prepare for competitions. We cater for all abilities from all backgrounds, welcoming players completely new to the sport, as well as those who grew up with GAA. Both of our teams are friendly and welcoming, and offer a great chance to learn new skills, develop existing ones, and of course, have the craic!

For information on training sessions and social events, please follow the University of Manchester Gaelic Athletics Club Facebook page. You can message any of the admins of this page (Sinéad Pearce, Lauren Magee, Niamh Maguire) with any questions

All of our social events will also appear on the University of Manchester Irish Society 16/17 Facebook page.

Alternatively, email us at [email protected]