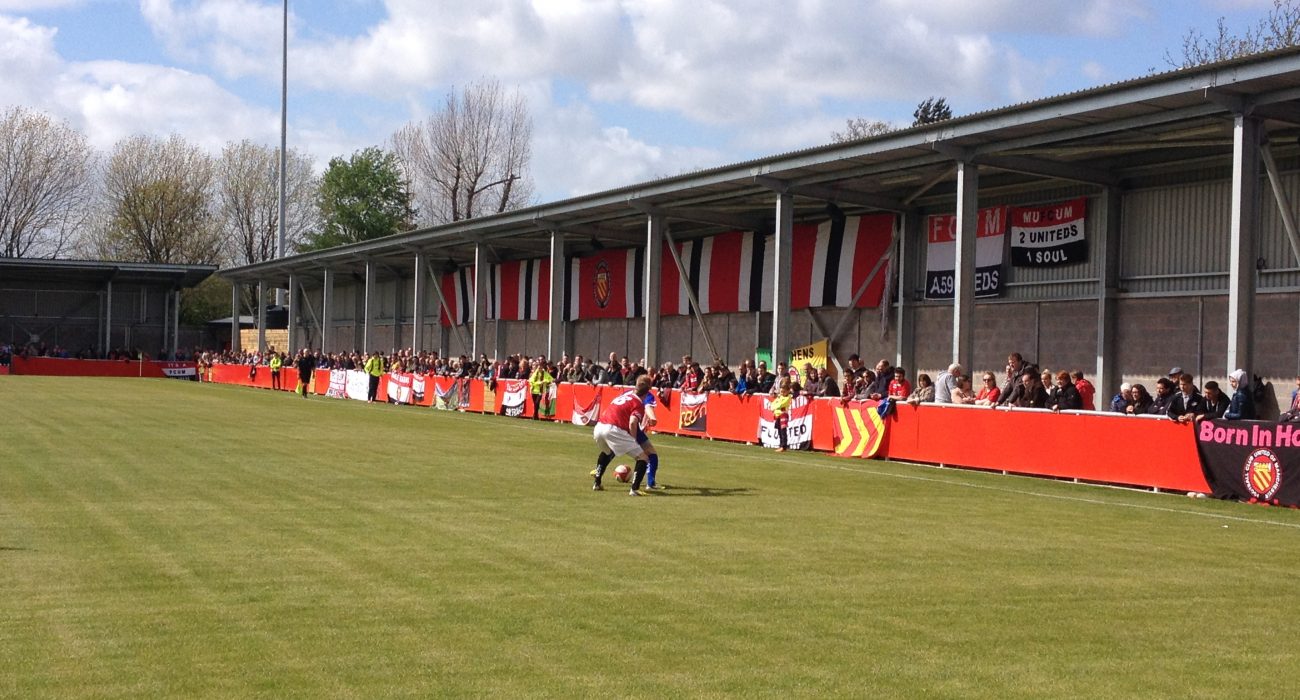 A question which is probably not asked enough. Manchester has been hailed as the Capital City of football in recent weeks because of the influx of world class players, coaches and huge amounts of money to the global brands that are Manchester United and Manchester City. It is so easy to be caught up in the hysteria and drama surrounding these clubs; the Manchester Derby was all over the back pages, not just in England but worldwide, for two whole weeks. While these two super powers battle it out for what looks like world domination, a much more intricate and delicate (but no less passionate) rivalry is brewing in the sixth tier of English football. FC United vs Salford City.

These two clubs are systemically and ideologically different in so many ways but have one key connection: both clubs are estranged children of Manchester United.

FC United are a unique club. Amid the globalisation of football in the last few decades, some people out there just love the purity of the common man’s sport. When Malcolm Glazer and his family bought Manchester United, a selection of Old Trafford regulars realised that the game which they had followed and loved for so many years was becoming stale through extortion for financial gain.

This became the last straw for a group of football loyalist who decided, in spite of the multimillionaire owners, that they wanted their football club back. The ‘Red Rebels’, who were made up of normal working class families and had no financial or legal means to fight the Glazer takeover, decided to found their own fan-owner football club, FC United of Manchester.

Discussions in curry houses, pubs and the Manchester’s Apollo Theatre led to the formation of FC United. While they have designed the club out of protest to Manchester United, the Red Rebels did not forget their origins. The fan-funded £6.3 million new stadium, Broadhurst Park, have their main stand’s layout in reference to Old Trafford’s old paddocks. The wooden design on the outside of the stadium alludes to United’s Newton Heath train company origins. The ideology of FC United resembles a stand against the modern exploitation of fans, with a ‘pay what you can’ policy for season tickets. There is also an anti-commercialism theme: “Pies not Prawns”, was a popular banner in the first few years. FC United are stubborn, but their gutsy attitude is commendable.

In their first competitive season, FC United entered the North West Counties Football League (the tenth division in English football) and made Bury’s Gigg Lane their home ground and broke attendance records which still stand today. The club went on the gain three promotions in three years, to the Norther Premiere League Premiere Division. FC United spent six seasons battling to get promotion to the National League North, which they finally achieved in the 2014-15 season when they finished champions after three failed play-off attempts in prior years. They finished 13th out of 22 teams in their debut season in the sixth division and currently sit 18th. With promotion to the Conference North came the reward of Broadhurst Park, a true home for the wandering football lovers

The ideology of the club is so deep-rooted that, because of their meteoric rise to the semi-professional leagues, fractures have started to develop in the belief of how FC United should be run. In the 2015-16 season, board members faced legal action for alleged defamation, protests became commonplace and resignations saw the club disillusioned with its own identity. The financial temptations of TV deals and sponsorship is against the philosophy of the club, however, some board members feel it is necessary for progression up the Football League ladder. A club founded and lauded for its democracy was becoming increasingly marred by its lack of transparency. It is sad to see such an incredible success story tainted, but FC United still face serious internal problems which are detrimental to the existence of the club.

A much more traditional club history than that of FC United’s. From humble origins, the club started as an amateur team winning county cups until they joined the non-league pyramid in 1982. Salford languished around the 9th and 8th divisions until the Manchester United connection occurred. Towards the end of the 2013-14 campaign, news broke that the legendary group of former United players, “The Class of 92” (minus David Beckham), were planning to buy Salford City football club.

The Neville brothers, Butt, Scholsey and Giggs. It was the stuff of dreams for many United fans and attention quickly turned to the non-league side and how they would operate under such legendary ownership. The reaction from the long-serving supporters was not completely positive, especially when the former United men sold 50 per cent of their shares to the Singapore-based billionaire and owner of Valencia C.F., Peter Lim. However, fans have warmed to the Class of 92 with their philosophy of trying to keep everyone happy while improving facilities and the performances on the pitch. It’s early days, but the signs of progress are clearly there.

Salford, with new investment, started the 2014-15 seasons impressively but results started to tail off towards the new year. The Class of 92 made their first seismic decision as club owners and opted to sack Phil Power as manager and instil joint-managers Johnson and Morley, known for their no-nonsense and hard-nosed approach to non-league managing. The duo guided Salford City to promotion that season to the Northern Premier League Premier Division.

Salford City’s stock rose with their success story which the BBC spread in their documentary ‘Class of 92: Out of Their League’. In the following season, Salford again won promotion, this time through the play-offs, to the National League North where they are currently situated. The ties with Manchester United were made clearer when Salford hosted United’s reserves to play a pre-season friendly, which the visitors won 5-1. Salford currently sit 7th in the National League North, three points of the leaders AFC Fylde, with the hopes of chasing promotion to the National League, the 5th tier of the English league system.

While FC United of Manchester and Salford City differ so radically in ideology, both clubs have strong ties to current United fans: Admiration towards FC United in standing up for what they staunchly believe in, and romanticism for what could be if the Class of 92 succeeded at running a football club. Simon Wadsworth, a Manchester United author, spoke at the Manchester Football Writing Festival and teased the idea that the Class of 92 were merely experimenting running a football club with the aspirations of owning a much bigger and more familiar club. Simon pointed out that the group already own Hotel Football, located on the doorstep of Old Trafford, and have Nicky Butt running the youth academies. With Giggs waiting in the wings for the United’s managerial job, there is a reasonably logical train of thought that the ex-United professionals could one day be co-owners of Manchester United. Strong romanticism indeed, no matter how deluded it may sound.

While Salford push for promotion with their long-term plan of playing in the Championship within 15 years, FC United need to figure out what kind of club they want to be; a fan-owned, non-league club meandering through the semi-professional leagues, or a more economically viable entity which can push up the professional league ladder. There are strong feelings on both sides of the argument, one can only hope that the club does not tear itself apart in the process of making a decision.