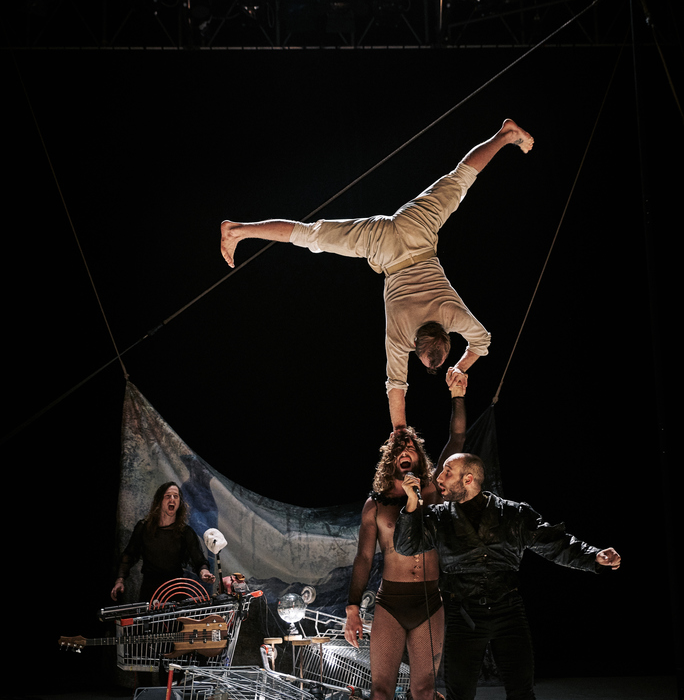 All Genius, All Idiot

All Genius, All Idiot is a delightful circus performance laced with tongue-in-cheek antics, yet does not shy away from edgier material

With just two nights in the Quays Theatre at The Lowry, All Genius, All Idiot  had far too short a run in Manchester. The four-man Stockholm based company have created a multi-disciplinary masterpiece exploring the human condition, without a plot or indeed much dialogue at all. Despite a slightly damning review from The Guardian as they closed London’s International Mime Festival earlier this year, the Manchester show did not seem “messy” at all, but rather an intimate journey for both company and audience.

Make no mistake, you get out what you put into All Genius, All Idiot. Do not expect an evening of refined acrobatics and eloquent writing. The highly malleable layout of the Quays Theatre was left untampered with, but the “traditional seating” did not indicate a traditional show. The surrealism of Svalbard’s piece was accompanied by mandolin-playing Ben Smith, the British quarter of the company, whose haunting voice was reminiscent of the late great Jeff Buckley and set a gorgeously strange atmosphere to start the show.

The acrobatics of self-described “clown” Santiago Ruiz Albalate are perhaps the strongest circus influence of the show, however the blend of text, physical theatre, original music and wit is brought about by equal contribution from every member of this exceptional company. The show is of course largely “without plot” and the audience are encouraged to contribute to the piece in some very well placed points of improvisation. Despite this apparent lack of structure, the scenes and their order seemed to resonate strongly with every audience member in a different way.

The show moves from deep social commentary to a hedonistic flurry of movement and muscle, from folksy banter to raw physical conflict with ease, and balances moments of lightness perfectly with thought-provoking texts and exceptional acrobatic talent. The wordless commentary on our culture, lusts and vices is both damning and amusing. Whilst the cast are undeniably comfortable with gender-fluidity and expressing sexual desire positively, they do not shy away from making the audience uncomfortable with rape analogies, overdoses and freakish costumes. The unnatural movements of Tom Brand in backwards clothing and a faceless mask will no doubt haunt the dreams of many theatre-goers. There is also a well-placed striptease from Santiago, wearing confetti-filled tear-away trousers, which appeared shortly after.

When asked what the inspiration of the show was, hand-balancing acrobat J. Simon Wiborn said, “the inspiration definitely mainly comes from us, from each other. We all have individual inspirations like dance, and music, and theatre, and clowning, but then the main core of ‘us’ is that we are inspired by each other”, which without a doubt is seen on stage.

Although Ben Smith seemed disappointed by such a “cosy” audience, All Genius, All Idiot definitely benefits from an intimate audience, unlike the company’s previous outdoor shows. The show is a dual experience; interaction is the key to its success.

For a maximum price of £17.00, it’s worth a front row seat, but don’t take your grandma with you. Unless she is comfortable with slightly warm tear-away trousers in her lap.