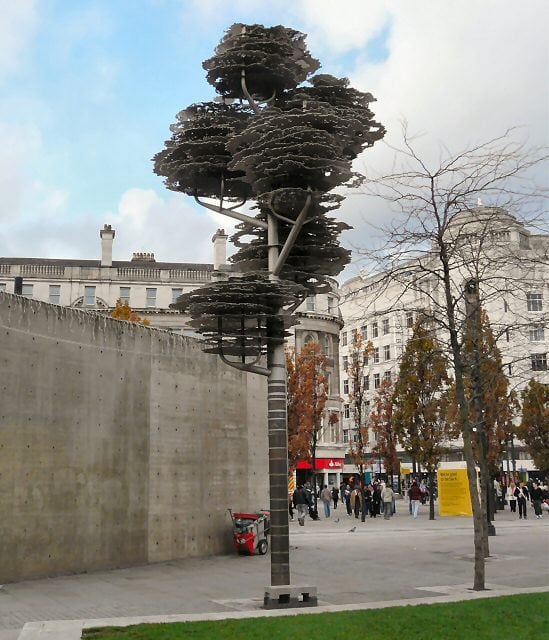 A pioneer in modern computing, this tribute to Alan Turing is situated in Sackville Gardens. Turing is commonly well-known as the ‘founder of computer science’. He is also something of an icon in the gay community, following his suffering during a time when homosexuality was illegal in Britain. Naturally, the memorial sits close to Canal Street, Manchester’s gay village.

Designed by Wolfgang Buttress and Fiona Heron, Piccadilly Gardens plays host to the Tree of Remembrance. Erected to mark VE (Victory in Europe) Day in 2005, the metal tree is a symbol for the civilians who lost their lives in the Second World War. Around the trunk are the names of said civilians.
Messenger of Peace

At the centre of the peace garden situated at the rear of the Town Hall near St. Peter’s Square, sits the Messenger of Peace. The figure marks Manchester becoming the world’s first ever nuclear-free zone in 1980. The statue was erected in 1986, created by sculptor Barbara Pearson.

“Ishinki” meaning “form returning to its heart” was created by Kan Yasuda. Weighing an incredible 18 tonnes, this polished stone is made from Carrara marble, and rests in Barbirolli Square outside Bridgewater Hall.

Acting as the gateway to Manchester’s Northern Quarter, the Big Horn by David Kemp was completed in 1999. The horn appears to be wrapped around the remains of an old building on the junction of Tib Street and Church Street.

Created by George Wylie, the Life Cycle is situated outside Deansgate Station. This huge metal bike was built in 1995. The bike is a symbol of the small things each of us can do to help ease the strain on the environment.