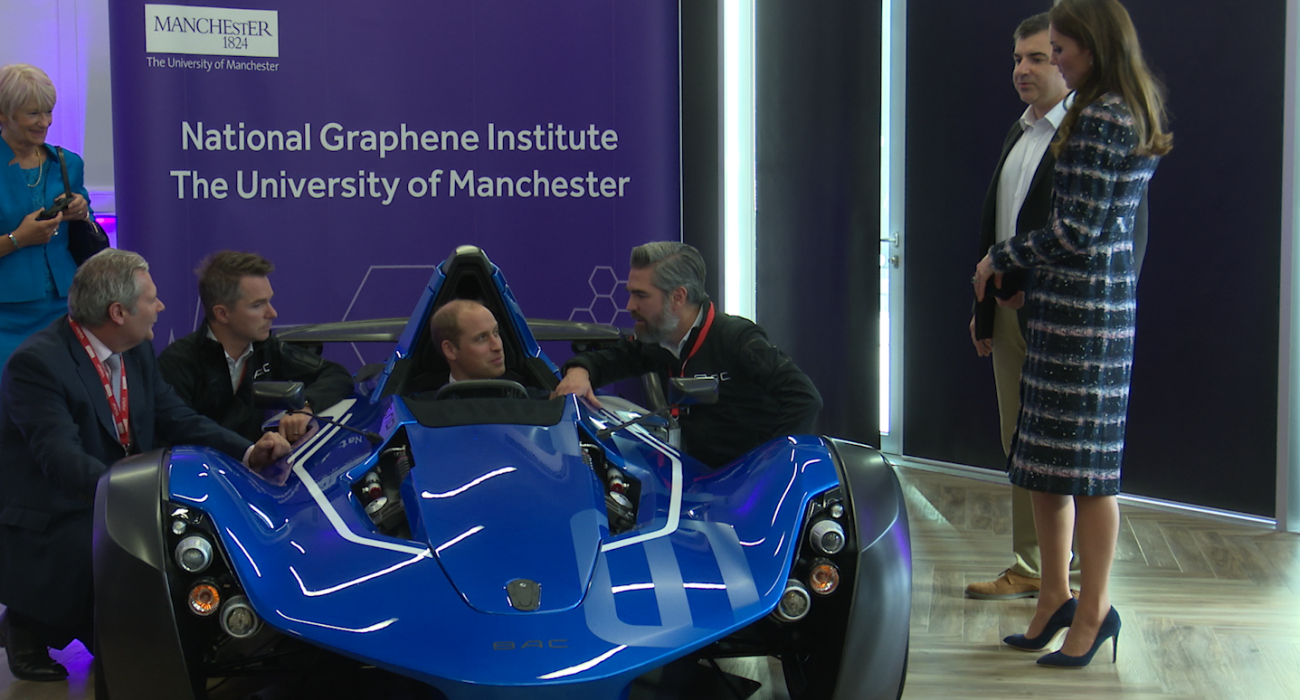 The Duke and Duchess of Cambridge visit The University of Manchester

On Friday the 14th of October their Royal Highnesses The Duke and Duchess of Cambridge visited The University of Manchester. During their visit the Duke and Duchess visited the National Graphene Institute (NGI) where they were welcomed by Professor Martin Schröder, the Vice-President and Dean of the Faculty of Science and Engineering, and President and Vice-Chancellor, Professor Dame Nancy Rothwell.

Their visit to the university was part of a series of engagements around the city of Manchester which included visits to The National Football Museum and the Town Hall, before visiting Francis House Children’s Hospice.

The Duke admired the BAC Mono single-seat supercar which is the world’s first car to use graphene in the production process. The vehicle has graphene composite rear wheel arches which significantly reduce the weight of the car whilst provides a performance benefit to the driver. The BAC Mono is designed and built in Liverpool and uses graphene supplied by Haydale.

Personalised 3D-printed toy cars which incorporated graphene were offered to the Duke and Duchess as gifts for their children Prince George and Princess Charlotte. Professor Dame Nancy Rothwell said: “It is an honour to be joined by Their Royal Highnesses The Duke and Duchess of Cambridge as we mark the commencement of the next milestone in the University’s campus masterplan.”

Following their visit to the NGI, the Duke and Duchess moved to Manchester’s Engineering Campus Development (MECD) site which is due to open in 2020. MECD, which is currently under construction with Balfour Beatty, will house four engineering schools as well as two brand new research institutes, which will comprise of 1,300 members of staff and 7,000 students.

During their time on the site, The Duke and Duchess sealed a time capsule which will be on display within the building once it is complete. The royal couple also unveiled a commemorative plaque to mark their visit.

Speaking during the royal visit, Professor Dame Nancy Rothwell said: “MECD will create a world-leading teaching, learning and research campus to develop the engineers, scientists and innovators of tomorrow.”

On the day of the royal visit, we asked students around campus for their views on the monarchy and got some very mixed responses.

Sophie Robinson said she believed the monarchy was “quite obsolete I guess, and it’s just basically a money making scheme for the country.” Tarelle Dixon added that “their lives are really sensationalised for no reason.”

On the other side of the spectrum, Tom Hower said: “I’m a big fan of the monarchy because they are what this nation is built on.” Cameron Cundill & Ashley Slatford added that, “it’s unique in the world, so it’s a good thing to have”.

When asked whether she agreed with the monarchy being funded by the taxpayer, Jess Steele argued: “The NHS is suffering loads of bad cuts at the moment, and I think why should that money be going to funding the Queen’s trips, what she wears, and where she does her hair.”

Dixon added, “we could definitely put that money to better use than them, like what do they use it for? Like new dogs? New corgies? It’s not necessary.”

Although she did add that even though she was an anti-royalist she thought Diana “was a cool gal… because she broke the mould”.

Most students named Prince George and Harry as their favourite royals although one student pondered: “Maybe George, depending on how he grows up.”

The final question put to students was if they could ask the royal family a question, what would it be?

Robinson said she would ask: “Lend us a tenner? Can I sit on your throne?”

Charlie Kettell wanted to know if they “ever go out, do you ever get boozy?”Another student said: “Can I be in your will?”

Jimmy Veecock said he would ask William if he would “Get a hair transplant?”

And Ashley Slatford and Cameron Cundill wanted to “ask the Queen who dresses her, because she dresses exquisitely, absolutely fabulous. That woman is still out of this world.”