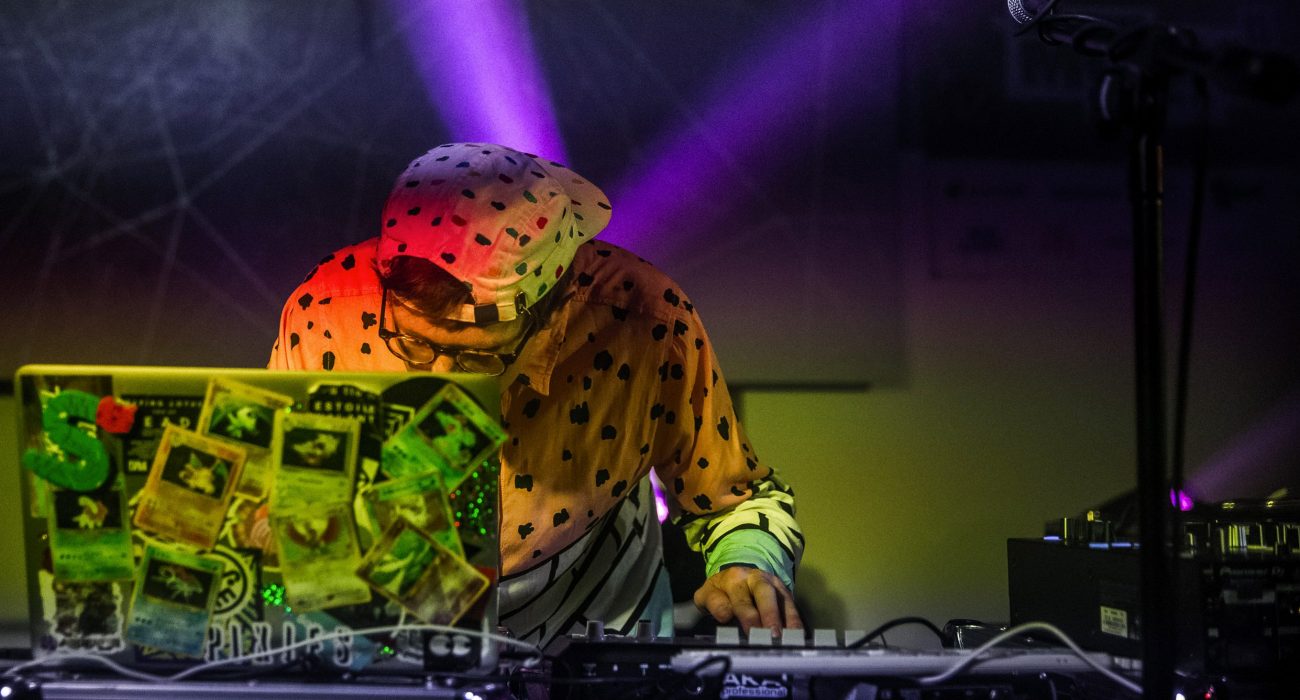 Much mystery surrounds the musical entity that is Iglooghost (real name: Igloo Ghost). Is he an alien? Is he a figment of our imagination, prophesising the second fall of mankind? Or is he a twelve-year-old boy with those trainers that light up when you walk? Little can be said with complete certainty other than he is making some of the most exciting and creative electronic music out there today. This is something that renowned LA producer Flying Lotus must agree with, as he wasted no time in signing Iglooghost up to his label Brainfeeder last October. It was here that his stellar EP Chinese Nü Year was dropped some weeks later.

That Iglooghost was signed by one of his musical inspirations is not lost on him.

“I still feel like I need to prove to myself I deserve it though. There are so many wicked nasty talented soundcloud wizards out there and I wanna beat them all… it’s not a competition but you know what I mean.”

Iglooghost’s music undoubtedly has a striking intricacy in its multi-layered nature. It is clear that this comes from a lot of time spent at his craft. This attention to detail and general quality is something that Iglooghost suggests has increased recently in the bedroom producer scene: “I’m hesitant to say we’re at a golden era of Soundcloud just because everyone knows the actual site itself is fucking crap, but I genuinely think bedroom production is in super saiyan mode right now. It’s moving at an ever-increasing exponential speed but the quality of ‘sound design’, or whatever interchangeable term you wanna use instead, is mental.”

When Chinese Nü Year was released, it came with the explanation, in his words, that it “is a story about a gelatinous worm-shaped creature who wears a witch hat called xiāngjiāo.” This worm-shaped creature is everpresent in Iglooghost’s artwork. Integral to his project is a visual aesthetic combined with storylines that he creates himself and which conceptually underpin the music.

“I work the music around visuals/storylines that I would have already made. It’s been that way for as long as I can remember. I think I kinda find the visual aspects a bit more stimulating which is weird.”

The music and the concepts are practically one and the same. This means that the idea of collaboration becomes difficult as it requires bringing someone in from outside of his specific ‘igloo universe’.

“I really have to resist getting people to feature on my stuff just because it feels like breaking the fourth wall. I really don’t want anything in my music that refers to real life for example. I guess I’ll do the odd remix or rap song but they sort of exist outside the iglooghost canon or whatever.

“The only vocalist I can really 100 per cent trust is my good pal Mr Yote, because he has a thorough understanding of the igloo universe. This all sounds a bit picky, but when this album that I’m writing drops, the whole storyline/universe will probably be a lot clearer and it’ll be obvious why I’m being a li’l bitch about features.”

For someone so involved in artistic creations which extend beyond just the music, Iglooghost as you might expect has been working tirelessly on his new album, which he says should be dropping in early 2017.

“I mean I’d be lying if I said it’s been fun to write. For the past year I’ve just been working on it for all my waking hours unless I got a gig or something. It’s like army camp. Like easily 50 per cent of my time is spent writing it.”

The album process then has been at once painful and useful, as he says, “I’ve been figuring out what doesn’t work, which fucking sucks but I guess it’s necessary… put so many hours into what ended up to be trash… but it kind of functions as clearing all of the (what turned out to be) bad ideas out of your head.”

It seems however that the exploration of all ideas, whether eventually good or bad, is something which Iglooghost sees as expedient. Advising any aspiring creatives, he suggests “if you’re struggling to find your voice in whatever art you’re trying to do, just combine all the weirdly specific things you enjoy into a giant thing, because nobody will have the same combination of tastes/experiences as you so you can’t really go wrong. It’s way more satisfying that trying to create something to fit a pre-made mould.”

In this light you can understand that the Iglooghost project, although initially seeming abstract, is deeply personal; a multifaceted creature, a “giant thing” that has gathered up the energy from all the weirdly specific things from a specifically weird mind, and then put on a witch hat called xiāngjiāo.