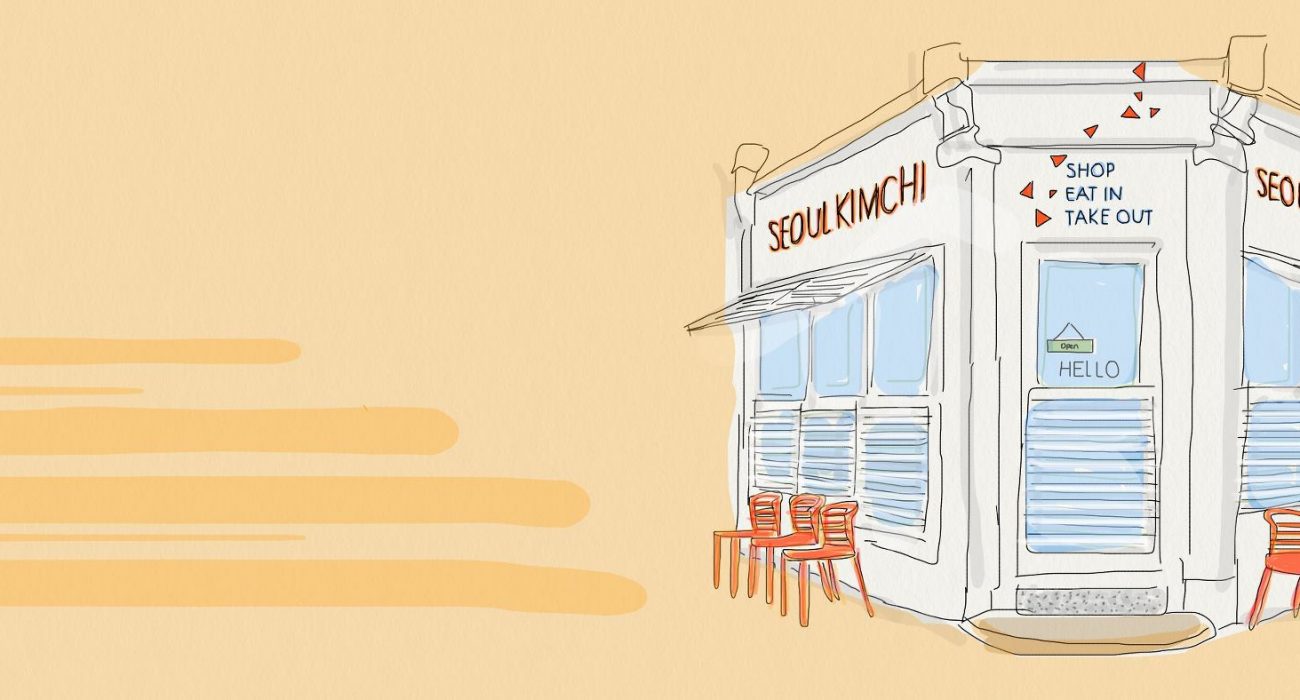 “Through the kitchen on the right.”

“OK.” I turn right before the kitchen and try and go down some stairs.

“No no, through the kitchen.”

“Oooh, OK.” I literally walk through the kitchen.

I find it. I go to wash my hands and next to the soap there is some face wash— I used to use the same brand. There are cups in cup-holders with toothbrushes in. Is someone living in the kitchen? More likely someone is living above the restaurant but still, it looked like someone was living in the kitchen. Bedding down every night between the defrosting chicken and the slowly fermenting cabbage.

I went to Seoul Kimchi with the ever brilliant Mr. Mcarthy and Ms. Duncan, both hailing from that wonderful slice of England, Kent. It is a little-known fact that all Kentish people love being taken out for dinner, as they are far too shy to go by themselves. They are a kind people, the Kentish. Who better than to take eating at this Korean Japanese restaurant, takeaway, and shop?

Situated on the wasteland that is Upper Brook Street (sort of behind Lidl) Seoul Kimchi sits on a street corner. It was funny walking in, the open plan kitchen is as big as the dining room, and there are a bunch of mirrors which make you think the dining room is bigger than it actually is. There were waiters and chefs prepping something on a dining room table. Later on, when the waiters weren’t busy with customers, you could see them delicately peeling garlic cloves. Incidentally, the waiters also peel the garlic at The River Cafe, part of Ruth Roger’s familial philosophy. And that same kind of all-in-it-together, family sensibility is something that Seoul Kimchi has in abundance. From the toothbrushes in the bathroom, to the sharing of the kitchen’s workload.

That sensibility, that familial quality, is best personified in its homemade plum ice cream. If you have no particular yearning for the foods of Korea and Japan, got to this restaurant simply for the ice cream. The braised beef was wonderful, and the sauce was the linchpin that commanded dips with rice laden spoons. The prawn bibimbap was a kind of utilitarian lunch option. If you had to choose a lunch with little portions of vegetables and a choice of meat or fish, over rice, under egg, that would fill you up and be healthy, then bibimbap is great. But it was underwhelming in terms of flavour. Chicken katsu curry, again, left a little to be desired, the panko crust was nice but the katsu sauce did not convey that classic peanut flavour but instead a sweet, plum like air.

Korean barbecue is one of the greatest things on earth. I have spent many a happy meal sizzling thin cuts of meat over tabletop grills. Although the cooking for Seoul Kimchi’s barbecue is done in the kitchen it was a must order. We chose that classical marriage of pig and seafood with a pork and squid dish. It was fine, with a course heat. The squid was well prepared but its texture was unpleasant. The plate was adorned with chopped peppers and chilies that gave a positive accompaniment to the dish.

The menu was large —not scarily so— but noticeable. We stuck to the “Korean favourites” section for the most part and our final plate was a sweet and sour chicken. It had the kind of tasty, home-style flavour that characterised most of the meal. But the crunch on that chicken deserves special accolades, it was a deeply serious crunch.

The whole evening was tied together with three scoops of iced hope, creamed faith, the kind of pudding that cures diseases and dissolves stress. The maddest part is we nearly left without trying it, being extremely well fed off five dishes for £45.00, with rice and miso soup. To avoid regret we got some ice cream despite not feeling we had the room for it. Luckily the ice-cream doesn’t actually take up space in your stomach but seeps into your every pore, it gets into the blood stream and starts doing things to your brain. Plum seemed like the right choice at the time, maybe that katsu gave us a taste, but they also had flavours like ginger and cinnamon.

Seoul Kimchi is the neighborhood restaurant I’ve never had.