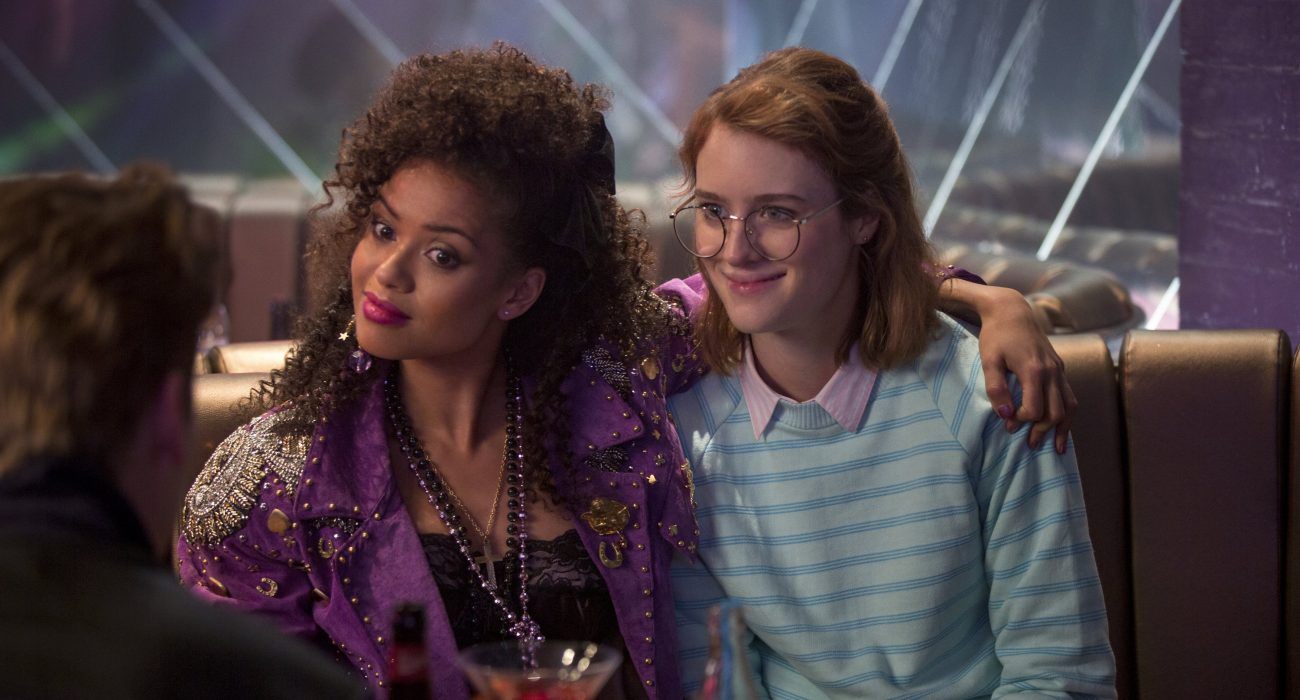 San Junipero, the season’s fourth episode, is no exception to this, as where the other episodes tend to present a moral ‘take home’ message, often sending viewers into a state of cynical unrest, this episode instead opts to focus on raising what are perhaps more ambitious questions than any previous episode.

The thematic existentialism, beautiful visual style and grandiose ideas of this particular instalment felt particularly interesting to discuss, especially as it marks a step away from the usual grim satire which laces Brooker’s writing. I advise against reading any further if you want to avoid plot spoilers.

We first meet our protagonists in the throes of the relentless party atmosphere of the titular ‘San Junipero’ in 1987, immediately recognisable from the expert 1980s costume and set design which colours the vibrant and atmospheric backdrop of the episode.

The story centres around an unexpected connection between the shy and sexually inexperienced Yorkie, and seasoned San Junipero ‘tourist’ Kelly, and the nature of their initial meeting, the town itself, as well as their respective backstories.

Much like the characters themselves, we are kept in the dark for much of the episode as to the existence of San Junipero and the presence of its inhabitants. It quickly becomes apparent that Yorkie (Mackenzie Davis) and Kelly (Gugu Mbatha-Raw) only visit San Junipero on a weekly basis as part of an augmented reality scenario they have signed up for in their real lives. The majority of the episode is left vague in terms of how this augmented reality fits into the overall narrative and why it exists, with Brooker’s writing intelligently hinting at different possibilities and allowing viewers to speculate throughout the course of the episode. It is only later that we discover San Junipero is in fact an artificially-created reality in which those seeking nostalgia or respite are allowed to be mentally transported to for a limited amount of time each week.

With this premise, the audience is never quite sure of the characters’ intentions or why they find themselves in San Junipero, with Brooker building towards conclusions in an unpredictable, yet calculated way.

The subtle 80s synth score aids the strange and beguiling atmosphere of the location wonderfully, which combined with the soft pastel colour palette only adds to the magnetic, dream-like allure of this alternate reality as a place of reminiscence and escapism for those whose current situation leaves a lot to be desired.

Brooker also pointed out the significance of the same-sex couple featuring in a 1980s setting, which of course wouldn’t have been deemed as acceptable as in the present day, which enhances the idealistic feel of Yorkie and Kelly’s alternate life even further.

The unprecedented popularity of San Junipero with fans of the show is hugely interesting, with some viewers even suggesting the possibility of a standalone series stemming from this new universe, pointing out the multitude of doorways and curiosities within the fabric of the episode.

On a surface level, this episode offers a seemingly more positive outlook than is typically expected from Black Mirror, yet upon looking beneath its exterior, it is clear to see that Brooker and episode director Owen Harris have created something truly multi-faceted, offering two richly developed characters, each with their own personal tragedies, and questioning the glossy ideal of eternal life.

In true Black Mirror fashion, however, the potential cracks and disadvantages to this technology are never too far away. Is immortality really such an ideal? Does the beauty of life live in its ephemeral nature?

This, of course, is for each individual to decide, and perhaps the biggest success of what is one of the most inventive episodes of the show to date.