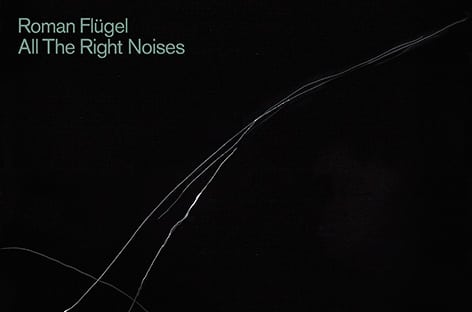 All The Right Noises is Frankfurt based producer Roman Flügel’s third album to be released on Dial Records. Yet don’t expect a continuation of the dense and fulfilling rhythms found in tracks like ‘Wilkie’ from his 2014 release Happiness Is Happening. You will be thwarted in the displaced and negated soundscape of Flügel’s new album.

“This time I took decisions faster leaving things unperfected when I thought the general feeling was right just to keep the music more vital,” says Flügel of the album.

In the polyrhythmic ‘Dead Idols’, drum machines and chirping melodies mix and dissipate beneath ambient sounds. Rhythms clash at different speeds and cut off before they can fully develop.

Flügel says of the album that he was “searching for ways to paint audible pictures without actually singing or saying a word.” In ‘Nameless Lakes’, these images are actionist vistas of glacial mountains, valleys, fireworks and electric bolts plunging into limitless depths.

The stand out track of the album is the eponymous ‘All The Right Noises’. In it the dislocated rhythms, pervasive throughout the album, are held together in a taut and cogent whole by the guitar sounds. Likewise, ‘Dead Idols’ and ‘Warm And Dewy’ spin out displaced and abrasive rhythms in enchantingly fickle, snaking trajectories — yet neither track manages to unify them.

The biggest nod to Happiness Is Happening comes in the intro of the album’s closing track ‘Life Tends To Come And Go’. Its buoyant, digitalised rhythms are reminiscent of those in ‘We Have A Nice Life,’ from Flügel’s 2014 album. However, whereas in the older track these rhythms cede themselves to more animated ones, in ‘Life Tends To Come And Go’ they fade into an ambient generator sound, punctuated unsettlingly by spirited piano notes.

With his latest release, Flügel has undoubtedly created an album in which every aspect is vital. That said, without the energy of Happiness Is Happening, All The Right Noises’ tautness can leave you yearning afterwards for the moment it could have unfurled itself, especially in tracks like ‘Believers’ where silences negate the soundscape further. It is an album which functions best when listened to back to back. Then the estranging displacement of individual songs can be overcome, through perceiving their nuanced and persistently ambiguous connections.