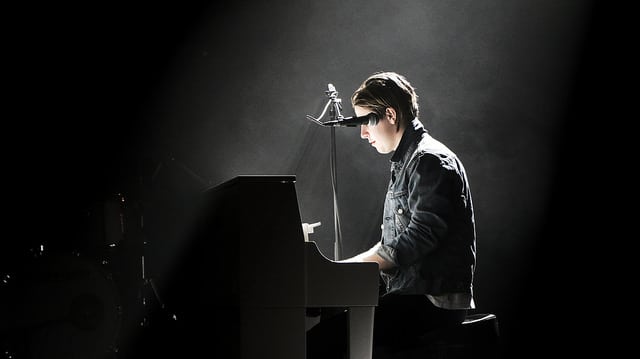 At the time of writing, Donald Trump is president. Whilst this may seem irrelevant, it is in fact hugely important, because it was on the day of this announcement that Tom Odell descended on Manchester to perform, continuing the tour for his latest album Wrong Crowd.

In short, his audience needed a pick-me-up (or a celebration, depending on their political opinion), and Odell delivered a set that impressed, dishing out tracks like ‘Another Love’, ‘Grow Old With Me’ and ‘Concrete’ to massive applause.

His band was an intriguing variety of backing vocalists, dual drummers and guitars, and their energy and enthusiasm for stagecraft echoed that of Odell’s. There was plenty in the way of tension; the moodiness of Odell’s first and second albums was not lost live, as the band often stepped back to allow for the man himself to ramp up the tension with a gentle nudge of audience participation.

But at times the set felt padded out. Most of the tracks ended with an elongated breakdown and build up to an additional chorus, and though this was effective the first time, after the third or fourth it felt played out and a little predictable. The audience lapped it up though, as audiences do in the spur of the moment, but at times the audience themselves were the most entertaining part of the evening.

As you can imagine, nothing quite kills the mood of a carefully constructed build up than a thick northern accent screaming ‘go on Tom lad’ on the upbeat of every climax. However, unlike the build-ups themselves, this did not stop being entertaining with repetition. For an artist with such a subdued sound, it was a surprisingly rowdy audience, a trait which Odell, to his credit, was quick to take advantage of.

Given the events of the day, it was inevitable that Odell would put in some flippant remark about the American presidential election. Whilst it felt a little forced when he began, ending his speech with the wonderfully cathartic line “he may be the most powerful man in the world, but he’s still a c**t”, was subversively funny, especially given that there was a child definitely no older than 9 years standing a foot away from me.

Overall, Tom Odell put on a convincing performance, which was definitely enhanced by the unique Manchester crowd. Tensions were high, sing-alongs were had, but ultimately Odell’s lack of compositional variety made the show enjoyable, but unremarkable.