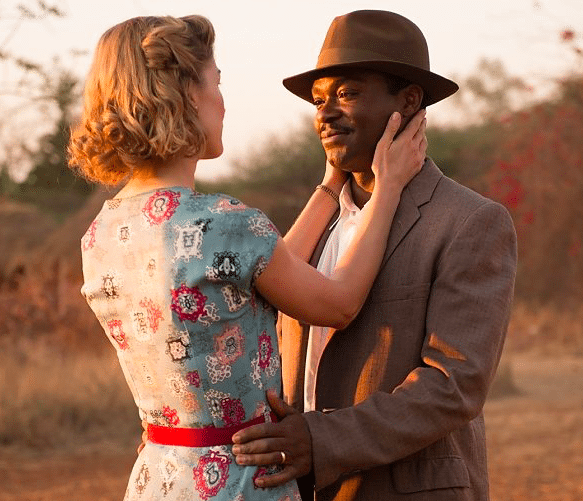 At opposite ends of the room Ruth Williams (Rosamund Pike) locks eyes with the intriguing Seretse Khama (David Oyelowo) at a dance in late 1940s London. It is in this moment that we know their love story is inevitable. We witness its brisk development within the first few minutes of A United Kingdom, culminating in a proposal which will spark a world of chaos for the lovers.

Seretse is the soon to be king of the Bamangwato tribe in Bechuanaland (now known as Botswana) and Ruth Williams is the woman he has decided to spend the rest of his life with. The only problem is, Seretse is a black man and Ruth is a white woman.

Interracial relationships were anachronistic for the time thus their engagement is met with opposition from both their families. With apartheid being instated in South Africa their union also poses issues for the British government. Alistair Canning (Jack Davenport) is the snobby bureaucrat appointed to raise a barrier to the couples union. This is because South Africa provides cheap gold to Britain. News of a white British Queen on the Bechuanaland throne would anger a nation cemented in its divisions.

Amma Asante, the films director, has made a romantic film which effortlessly merges the personal and the political. Her previous film Belle (2013) also dealt with race relation issues. Asante’s small yet outstanding catalogue of work is fast establishing her as an auteur. Namely, of personal true stories that show love can restore humanity in otherwise inhuman situations.

The film is based on true events. It is the love story amongst all of the political and economic turmoil which anchors the film. Rosamund Pike and David Oyelowo are superb in their portrayal of the couple. Their chemistry is undeniable and Oyelowo particularly shines with his terrific accent and steely resilience against a tide of oppression. He once again showcases his talent as a leading man and also his talent for giving speeches as seen in Selma (2014).

The supporting cast is also outstanding with a plethora of famous faces such as Laura Carmichael of Downton Abbey fame, and Nicholas Lyndhurst from the iconic Only Fools and Horses. They play Ruth’s sister Murial and her father George.

The universality of this true love story coupled with Asante’s expert craftsmanship makes this film the perfect cinematic package. It is an easy watch with emotive content played out in the breathtaking landscapes of African. Despite a slow start and rather clunky dialogue at time, the film still excels as a masterpiece and will leave your heart well and truly warmed.