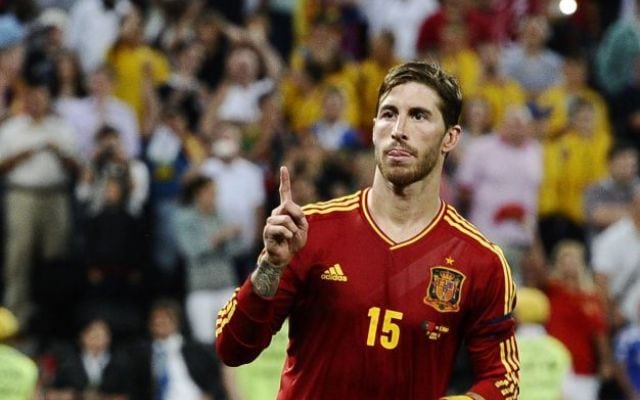 Yesterday, Sergio Ramos watched his Real Madrid team-mate Cristiano Ronaldo pick up the first edition of FIFA’s ‘The Best’ award, crowning him the best footballer of 2016. It was an extraordinary year for Ronaldo, who won the UEFA Champions League, UEFA Euro 2016, FIFA World Club Cup as well as the prestigious Ballon d’Or.

It was not such a bad year for Ramos either, as he was part of the same Real Madrid team that won the Champions League for the second time in three years. In the two finals in Lisbon 2014 and Milan 2016, Ramos found the net as Los Blancos beat their city rivals Atletico on both occasions.

Ramos was a key part of La Decima and La Undecima as Real Madrid won their tenth and eleventh European cups. His role in the 2014 final will be remembered fondly, as he headed in a Luka Modric corner to send the game into extra-time where Real scored three goals, eventually winning 4-1.

In 2016, the Real Madrid and Spain captain lead his team in the UEFA Super Cup final, scoring a last-minute equaliser to earn his side a draw, and take the match into extra-time – where Dani Carvajal netted a stunning late winner.

Ramos has become iconic for last minute goals. As well as scoring late equalisers in the 2014 Champions League final and the Super Cup final in August, Ramos rescued a late point for Real Madrid against rivals FC Barcelona in early December.

When Zinedine Zidane’s men look back at the end of the season, this could be a pivotal point, which also caused FC Barcelona to drop two points.

Courtesy of Ramos, Real Madrid earned precious points again a week later, as they came from 2-1 behind in the 85th minute to beat Deportivo La Coruna 3-2 at the Santiago Bernabeu. Ramos scored deep into stoppage time as Real Madrid snatched victory from the jaws of defeat.

Ramos is the scourge of even Spain’s biggest teams, and not just for his unique ability to score goals at vital times. His never say die attitude is evident in his defending, he is a tough old-school style defender who always leaves his mark on the game.

He is also useful on the ball. Ramos has a 90.4 percent pass accuracy in the 2016/17 season so far as he has been instrumental in Real Madrid’s unbeaten start to the campaign. Ramos has transformed from a marauding right-back to the ultimately perfect centre-half.

In UEFA Euro 2008 and the FIFA World Cup 2010, Ramos operated as a right full-back for the Spanish national team as they won both tournaments while having the best defensive record. Spain only conceded five goals in 13 games across both tournaments, and Ramos was ever-present.

In the next major tournament, Ramos formed a central-defensive axis with FC Barcelona’s Gerard Pique, who himself has figured in four FIFPro World XI’s, including the latest. In Euro 2012, Spain only conceded a single goal as they marched to their third major international triumph in four years.

Ramos is a legend for Real Madrid and Spain, he has earned 140 caps for his country at the age of just 30. It is possible that by the end of his career that Ramos could become the first international player to have 200 caps to his name.

If he keeps playing the way he is, he will receive this accolade with ease. Real Madrid’s defensive rock and inspirational leader is very much in the prime of his career and hungrier than ever before — under the guidance of Zidane.

Despite all his achievements, he is not liked by everyone. Ramos has a poor disciplinary record that has seen him pick up 13 career red cards. His aggressive style of play is evident, but the numbers elsewhere do not lie.

No defender has ever managed to make it into six consecutive FIFPro World XI’s. Aside of this, Ramos has been named in seven of the last nine. In yesterday’s team of the year, Ramos received an impressive 488, 908 votes — more than Cristiano Ronaldo and Lionel Messi.

The team was dominated by Real Madrid and Barcelona players, with only Manuel Neuer of Bayern Munich and Dani Alves (who spent half the year with FC Barcelona) of Juventus the only other representatives.

Ramos was undoubtedly one of the big names in the team, and his achievements of the last few years prove that he is not just the best defender in the world right now, but perhaps the best of his generation.