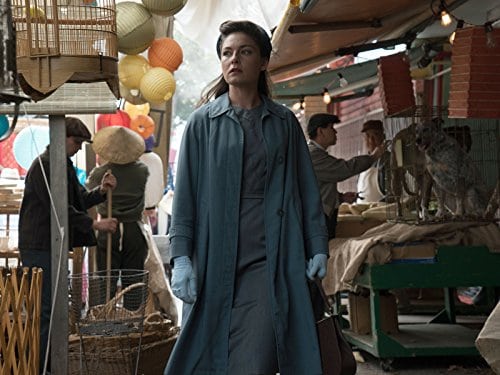 An Alternative History of Fashion: Costume in The Man in the High Castle

This week I took it upon myself to watch the pilot episode of the TV show, The Man in the High Castle. This series is set in an interesting alternative reality in which the Nazis had successfully risen to power in the aftermath of the Second World War, and I must admit that it is let down by an intensely unoriginal script and mediocre plotline. However, what the episode did not fail to deliver on, was an abundant force of wonderful costume.

Since the show is set in America circa 1962, one might expect to see bursts of colour and some bold patterns à la Mad Men, however, under the tight military regime that the plot entails, both of these aspects are controlled and brought under somewhat of a wartime theme.  A palette of olivey greens and various shades of brown make up the show’s wardrobe,  creating a dull and modest aesthetic yet one that is full of elegant vitality. Not only are these colours parallel to military uniform and thus suggestive of a parallel civilian lifestyle, but in their earthy tones, they reflect a natural existence, one of subtle pride, rather than gaudy vanity.

The women in the series are seen in shapely formal dresses that define and smooth curves into perfection, and on these dresses, where pattern is concerned, the past is seen to float into the present in decorative yet simple florals, reminiscent of the western 40s and 50s. In keeping with the theme of definition and simplicity, fronts are kept either pristinely smooth across the chest, or buttoned down. Buttons often frequent the screen, attaching the show with a childlike and humble aesthetic, in a world nearly bereft of technology and modern advancement.

Moreover, what would one expect of fashion-focused wartime but tweed jackets and trench coats? Practicality takes hold of the lives of the cast in sheer textural perfection. Further inspiration, especially for these cold winter months in the grim north, is the frequent use of corduroy in the show, which should find a place in your wardrobe. The pockets in the clothes featured on the show have two purposes: not only are they in keeping with the 40s inspired look, but they also have the more practical use of concealing the character’s secrets, a completely practical fashion statement that we can all get on board with.

The show perfectly executes the interweaving of histories to present a wardrobe of both a rough yet poised wartime texture, and that of progression, into a softer, more casual world of youth and material enjoyment. The soft round-cornered square collars truly sum up the confusion of the wardrobe of the alternative era, they offer an impression of something that is simultaneously soft and coarse.

In my opinion, the show contains revolutionary fashion despite it being grounded in familiar history; what an alternative history provides is a space in which there are no fashion rules, only inspirational guidelines. The 40s and 60s are knitted together alongside military life to create a diverse and strict, but multi-tonal wardrobe.

This is a wardrobe that is not difficult to weave into one’s own, one of cosy hand-knitted vibes and subtlety. A couple of pairs of cord trousers and a button down trench coat, and you are well on your way to looking and feeling effortlessly elegant and composed, in the style of the hit series The Man in the High Castle.