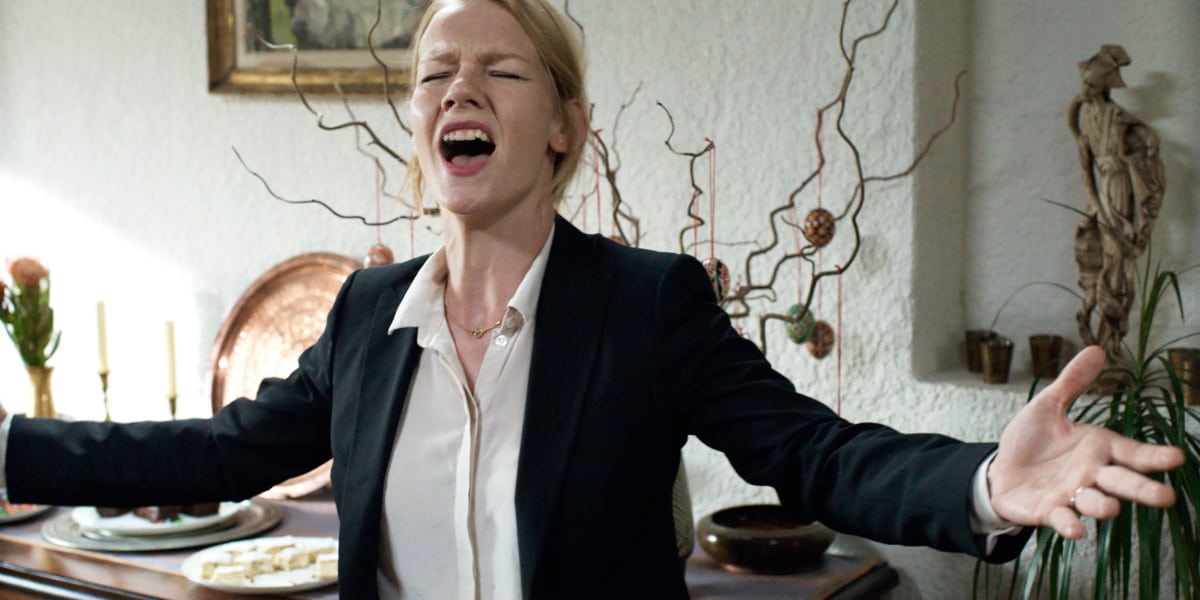 As 2016 came to a close, one film that was on the lips of numerous esteemed critics was Toni Erdmann. Voted Sight & Sound’s best film of the year, I longed to watch the magazine’s most acclaimed film. Written and directed by Maren Ade, this 3 hour German comedy focuses upon Winifred (Peter Simonischek), a junior school pianist, who adopts the alter ego of Toni Erdmann to prank his 30-year-old daughter, Ines (Sandra Hüller). With a flowing brown wig and a set of decaying yellow teeth, Toni is equipped well to embarrass Ines and her modern working life. Working as an exploration of modern life and its repercussions upon family relationships, the film is not without its poignant moments. It is strangely within the empathetic scenes of Ade’s work that charm you — a stark contrast to its overly long comedic acts.

Visiting his daughter on a surprise birthday lunch, Winifred is taken aback by Ines’ distance and over attachment to her phone which constantly rings with business calls. Working in the dizzy heights of the oil industry in Bucharest, Romania, Ines is the epitome of the hard-working independent woman. Visiting from the city, she makes little effort to engage in human contact with her now-divorced parents. Fathoming her distance, Winifred leaves the surprise party early. When he arrives home, his overly chubby dog has passed away. With this, he decides to surprise his daughter in Bucharest to restore some balance to their relationship.

Arriving in Romania’s capital, it soon becomes clear to Winifred that his daughter is even more religiously attached to her job than he initially thought. Using Toni to sabotage her working life, he does not shy away from intruding upon his daughter’s working and social life. Their first encounter is hilarious in its narrative execution. Working as an accumulation of the opening, Ines’ first encounter with Toni lingers long after the film has finished. The cinematography of Patrick Orth is still and calm within the upper echelons of numerous Romanian Kardashians and Ines’ co-workers. Capturing the hustle and bustle of modern city life, Ade’s film attaches itself upon the diegetic sounds of taxis frantically racing about the city. Through setting this tale in an Eastern European city, Ade creates the impression of sleaziness and overindulgence in Ines’ VIP executive life. One scene that springs to mind on this matter is a scene based in an EDM-based night club. In the relationship of Ines and Winifred, it foregrounds the volatile nature of their ongoing joke — one that is starting to have serious repercussions for both parties.

Numerous emotional moments, such as these, work to deepen this relationship. Over its duration, little comedic moments clearly channel European absurdist work, such as the recent The Lobster. Yet, a climatic nude scene leaves an aftertaste of too much self- knowing and Office-esque awkwardness. It is not that these scenes are not funny: it is that a work’s self-embarrassment has had its day in the sun. Some would claim the verisimilitude of such scenes are the beating heart of the film, but largely its impact is one of tediousness. Although some scenes do indeed drag with this conscious comedy style, moments of affection and sadness are allowed to breathe like their trip to the Romanian oil fields and a glorious Whitney Houston number.

Like a fine wine that needs time to breathe and come up to room temperature, Toni Erdmann will either leave you wanting more — which audiences will get in an American remake with Jack Nicholson and Kirsten Wiig — or want to throw the bottle down the sink. Although I am neither of these categories, I can see the pleasure in such a film.