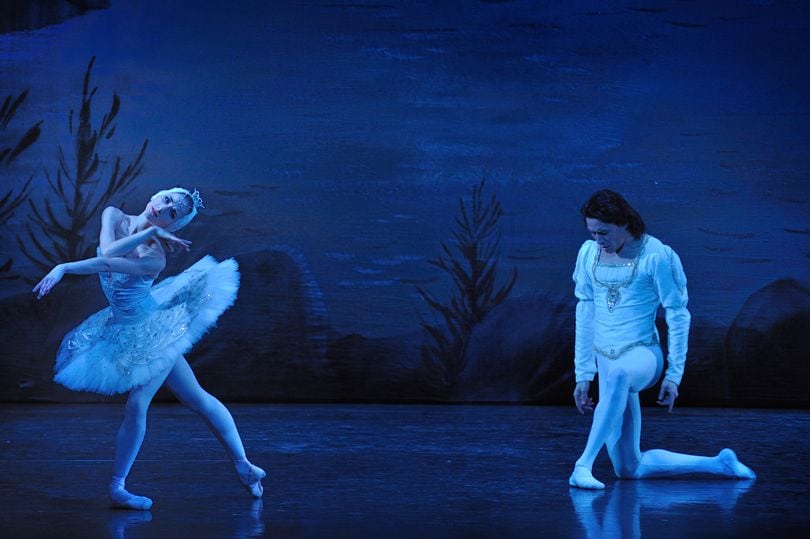 Never having seen a ballet I was unsure of whether I would enjoy Swan Lake or not. However, even without the skills or knowledge to critic the choreography, it was clear how high the standard of performance was. The dancers were perfectly in sync and left you wishing you were as athletically skilled. The company were able to create stunning imagery with impressive ballet routines.

Without any dialogue, resting purely on the company’s physicality through ballet, Moscow City Ballet told the story of Swan Lake. The play revolves around a Prince who is looking for a wife. Many princesses arrive at the palace to meet the Prince. This resulted in some excellent and exquisite soloists as well as corps de ballet numbers. The Prince however is unsatisfied and ventures outside towards the lake. Here he meets the Queen of the Swans, whom he falls in love with. The White Swan has been cursed and turned into a swan waiting for a Prince to break her spell. All is not well as an evil sorcerer plots to take advantage of their love, through tricking the Prince into marrying his daughter the Black Swan.  This leads to tragedy for the lovers.

With no pre-existing knowledge of the ballet I was able to follow and understand the main storyline, although more nuance details were lost on me till after I read about the plot.

My one critic is that due to the lack in speech the ballet lies heavily on physicality. This physicality is showcased brilliantly through the companies dance ability, but had the dancers engaged their faces instead of expressing neutrality it would be easier for the audience to understand the storyline and how specific characters were feeling.  There was a tendency for the dancers to appear disengaged with the events on stage, this is particularly true for the Prince who seemed to lack an emotional depth. Although this can be a critic of all ballet generally.

The character which most easily identified to the audience what was going on within the dance numbers was the Jester, as he was the most facially dramatic, thus illustrated the Princes lack luster approach to his potential brides and his pining for the Swan Queen.  The Jester also stood out for his exquisite dance ability and really did demand your attention whenever he was on stage.

The ballet is accompanied by a live orchestra, The Hungarian Sinfonietta Orchestra. The live music enhances the dancing onstage and helps to create a truly memorable and dynamic performance.  No set except for gorgeous backdrop to allow for maximum space for dancing. The backdrops depicted the castle, banquet hall and a moonlit lake. The stunning costumes depicted the grandeur of the ballet.

Every single dancer performed the complex choreography with ease and elegance. No wonder this is a signature piece in the group’s repertoire. The principle ballerina Liliya Oryekhova was sensational.

Oryekhova moved with seamlessly between the white and black swan and somehow she was able to embody the swan like quality the two main roles desperately requires. All the swans were physicalized beautifully by the dancers. Fantastic leaps, unstoppable pirouettes and dynamic lifts were present throughout the performance. The entire production emitted poise, grace and beauty. It doesn’t matter if you have never seen a ballet before or have been to the ballet countless times Moscow City Ballet’s production of Swan Lake is certainly one to go and watch.

Only on until Saturday 11th February, get your tickets here.