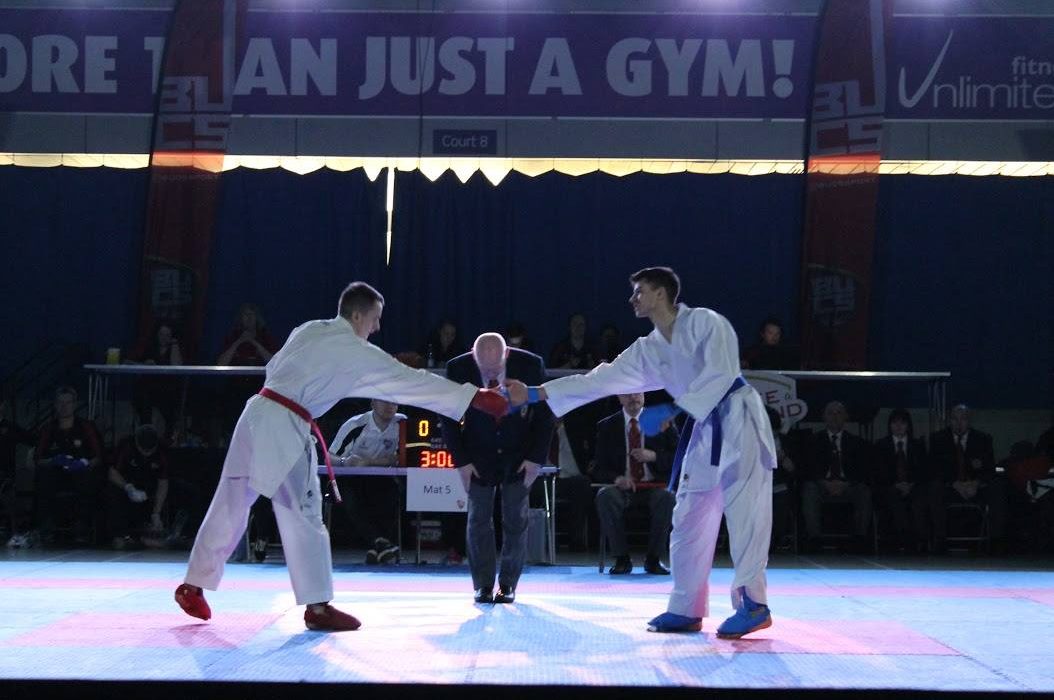 The BUCS University Nationals occurred in Sheffield on the weekend of the 17th-19th of February this year, seeing action from 6,620 athletes across nine disciplines, all vying for medals and coveted BUCS points. Just under 500 Karate-ka from across the country converged on Pond’s Forge International Sport Arena to take part in this huge sporting weekend, competing in the disciplines of individual and team Kata (athletic performances of set techniques) and Kumite (semi-contact combat).

Manchester set off in the young hours of the morning across a misty Snake Pass, taking a team of 12 members, 10 of whom were competing for the very first time.

Saturday saw the performance of Novice, Intermediate, and Senior Kata, which saw former medalist David Brierley competing in Senior for the first time after moving up from Intermediate, Zuzana Bujnovská seeking to improve her Bronze in Women’s Intermediate from last year, and many novices competing for their first time.

A string of close 8th place finishes presented encouraging results for future competition success for our novices, and first year students Allen Wang and Theo Fisher made strong first impressions in a Senior category with 81 competitors all seeking BUCS Gold – David unfortunately bowing out in the 3rd round 3-2 to Sunderland. However, the day was Zuzana’s, who took home silver in her final BUCS performance in a close final under the Pond’s Forge spotlights.

A frustrating fight for Allen Wang saw him narrowly lose his first fight, and unfortunately Theo also lost out in a slim margin in the second round of his senior -75kg category. However, in -67kg Macedonian National Team member and Manchester fresher Adil Mehmed stormed into the final in stunning style, winning his first fight in 45 seconds, and making it through without dropping a single point against his opponent.

With the lights dimmed and the crowd baiting their breath in anticipation, Adil took to the tatami against his opponent Adam El-Shafei from Strathclyde, who had previously won the -60kg event.

A lightning punch from Adil sent him into an early lead, but Adam soon overtook him in points with a heavy roundhouse kick to the side, putting him 2-1 up. Over halfway through the match and Adil retook the lead with a show-stopping head kick, placing him at 4-2 into the closing seconds of the match, with Adam’s only options being to score with a head kick or a throwing technique to win.

The tension mounted as a bad kick from Adam sent Adil to the floor, worrying the crowd that had already seen four injuries end the hopes of gold that day. However, Adil recovered and took to the tatami for the last fifteen seconds, defending himself against an onslaught of techniques from Adam who hoped to either score with a kick or force Adil off the mat, with the potential of disqualification.

Adil stood his ground and held Adam off in the dying seconds, with Pond’s Forge erupting in a massive roar from the Manchester crowd as his victory was assured. To take a gold and silver from such an inexperienced and young team was a great result from the weekend, and the University of Manchester Karate Club looks forward to BUCS 2018, where our team will be returning more experienced, more eager, and even more Purple and Proud.