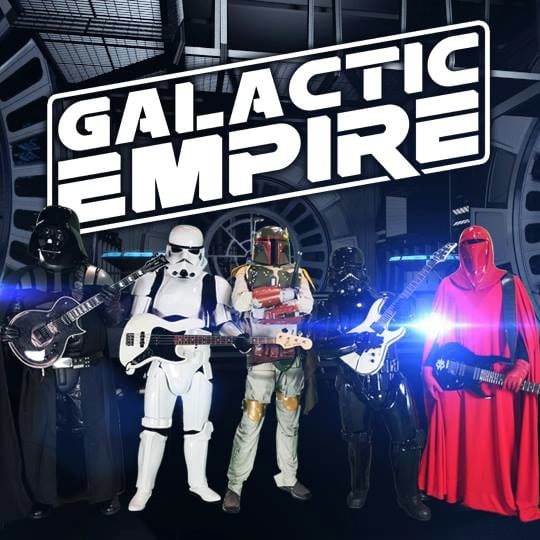 A long time ago, in a galaxy far far away…. Darth Vader shreds guitar to crowds of screaming fans while Boba Fett keeps rhythm on drums and a Jedi knight punts merch round the back. This is not a strange piece of fan fiction, but rather something that actually happened, albeit at a different time and a different place. On Friday the 10th at Satan’s Hollow, Star Wars-themed metal group Galactic Empire played the third consecutive sold-out show of their current UK tour.

When I arrive the basement venue is filled with a motley crew of Leias, Yodas, families with kids and old men who have an impressive amount of hair for their age. I make my way past the giant glowing eyed Satan to the edge of the stage. The lights dim, there’s a moment of silence, and the band enter to the sinister chorus of John William’s ‘Duel Of Fates’.

Vader leads the troop, his lightsabre swings, deftly removing any haughty notion that I wouldn’t enjoy seeing a Stormtrooper play bass guitar, while deepening my worry that this may not have been the best thing to bring my girlfriend to on one of her few visits before she leaves for Argentina. They are all in full costume, tweaked for copyright reasons and with the allowance of a pair of nikes here or there. It’s an impressive sight: even the roadie is decked out as an imperial soldier.

The entire set consists of instrumental adaptations of Star Wars theme music, which is where things become a bit of a hard sell for the non-devoted. However, importantly and perhaps surprisingly, the joke doesn’t wear thin (although they do only play for thirty minutes). While not that musically exciting, the successful transposition of an orchestral film score to a rock quintet has to be appreciated.

It is undoubtedly John Williams’ famous compositions being flung between the guitarists’ fretboards and I’m struck by how well they lend themselves to the adaptation. When I say this later to an extremely dehydrated Boba Fett he agrees:

“Yeah I don’t think John Williams knew in 1979 that he was composing progressive metal tracks but turns out he was.” How hot is it in that outfit? “Very.”

Performing in large crash helmets has the potential to limit band-crowd interactions. However, Galactic Empire circumvent this with genuinely funny skits pre-recorded in the various characters voices. Littered with references, these prevent the spectacle from becoming monotonous. At one point a lucky audience member is brought up on stage and force-choked by the band’s lead guitarist. Needless to say, it’s not something you see every day.

Galactic Empire are decidedly niche, and a novelty not really worth seeing for those with only a passing interest. However, the performance is full of humour and well thought out, offering plenty for fans of both the films and the music. If this sounds like your kind of thing, then it probably is. Take it from someone who is by no means a metalhead; for a Star Wars fan, Darth Vader headbanging his way over to you is a strangely thrilling experience whatever your musical leanings.