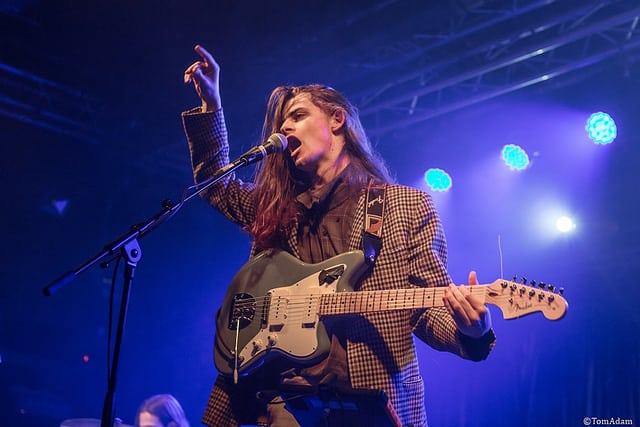 Upon my arrival at the Albert Hall to see Sundara Karma, I was told very good things about Blaenavon, who were tonight’s main support act. Arriving just in time for Blaenavon’s performance, I was far from disappointed. The band’s presence was instantly entrancing when they stormed the stage, receiving roars from the brash Manchester crowd. The atmosphere felt like I was watching their own headline show. Beginning their set with ‘Hell Is In My Head’ I couldn’t quite believe what I was seeing. Lead singer Ben Gregory dressed in a beautiful beige suit, instantly made an impression. “I’ll be the only one you’ll ever find” he beams, the sensual guitar riffs that follow, result in the crowd moving everywhere, bodies flailing to the beat. “Lets Pray” shortly follows, an upbeat and melodic track, sees all the crowd singing “Lets pray, lets pray, lets pray for death” in sequential unison, whilst a mosh pit opens in the process. Before playing their next track, Ben takes a quick moment to thank Sundara Karma for taking them on tour “It’s been sweet”, announcing that this is their last night of the tour. Talk about going out with a bang.

After a short pause, filled by the crowd roaring “Manchester La la la” common courtesy of Manchester night life, the band proceed to play ‘My Bark Is Your Bite’ clearly an old, fan favourite. Fans’ hands, whether old or new flail in the air; the crowd surging from front to back. New single ‘Orthodox Man’ shortly follows, already a familiar track with many of the audience members who can be seen singing the song word for word. ‘I Will Be The World’ beams loud, euphoric guitar riffs, the band proceed to throw themselves across the stage, using every ounce of their energy, with Ben throwing himself to the ground, the trio still retaining immense synchrony. No wonder the crowd are going wild in response. Closing their set with ‘Prague’ it seems like a fitting end to an astounding set. All the crowd jumping around going mad, screaming the lyrics “It’s you I said, keep running in my head. I swear its old” the dark, tuneful guitar riffs that follow create a euphoric environment. Ben then proceeds to go into the crowd, who seem elated by this “We’re a band called Blaenavon, thank you so fucking much”, and with that it was all over.

Blaenavon’s performance was something special. They made an everlasting impression on myself and countless others.  If this is what Blaenavon’s support slots are like, who knows what’s in store when the band return for a headline show at Deaf Institute in March. One thing’s for sure, if tonight is anything to go by. It will be something to remember.