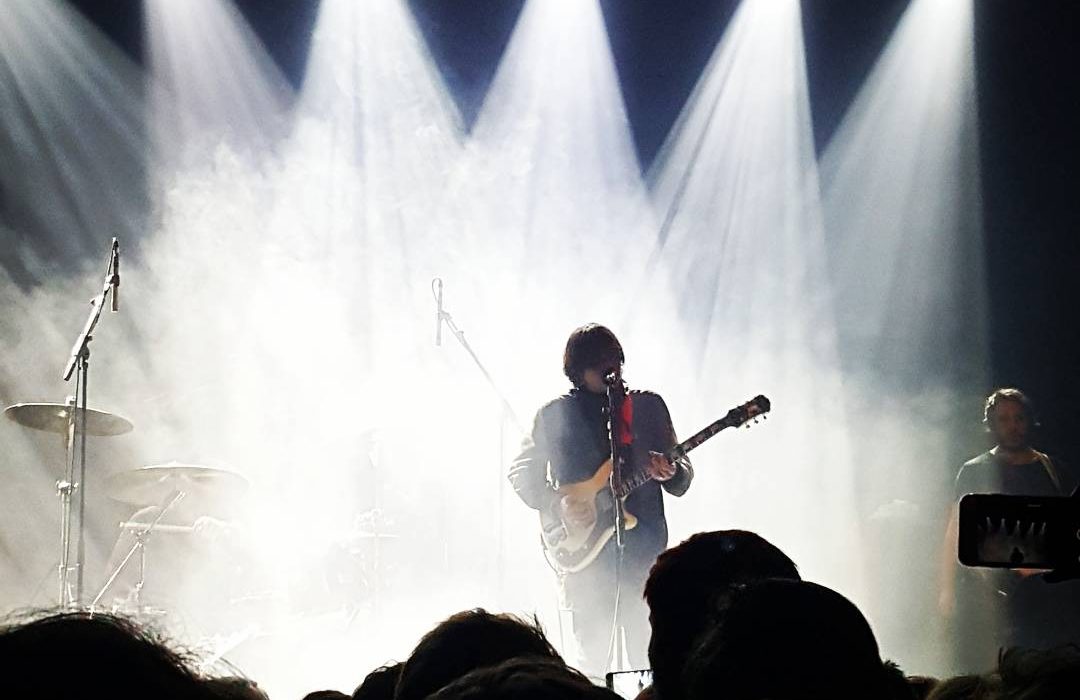 In the two and a half years since the release of his first album as a solo artist, Stomachaches, Frank Iero and his band have been through a lot; they’ve toured relentlessly across the world, recorded a new album and brushed shoulders with death. It’s been a pretty tough couple of years, but they’ve stormed their way out of it with a new band name and an album that doesn’t just pack a punch, it stabs you in the chest. Repeatedly. But, like, in a good way.

Parachutes delves into the depths of Frank Iero’s emotions with unflinching brutality. It’s not just an album, it’s an emotional excavation. And the result is uncompromising honesty. Volatile vocals meet flawlessly executed instrumentals and you’re left wondering how something so chaotic can be so perfectly contained, but it is. Frank Iero has perfected the art of encapsulated chaos, and watching him and his band The Patience bring this musical catharsis to the stage of Manchester’s O2 Ritz, this became abundantly clear.

“I feel like when I was making [Stomachaches] I was writing songs because I needed to… I had no intention of writing a record. I was just documenting what was in my head and trying to make myself feel better”,  Frank tells me. We’re sat on a sofa in one of the small rooms on the second floor of the Ritz, just a couple of hours before the band would be taking the stage in support of Taking Back Sunday. Whilst Stomachaches was not intended to be a full album, however, their latest release Parachutes required a different approach; “This time around I knew that I was going to be doing a record and that it was going to be released, so I wanted to be incredibly clear about what it was I was saying. I wanted to dig deeper than I ever had.”

“I don’t feel as connected to [previous band] Leathermouth as I do this project. This is the record that, if people were to ask if I could put my identity onto one disk, what would I show them, I would give them Parachutes.”

This level of honesty and emotional intensity is definitive of Frank Iero as a lyricist, a musician, and a performer. But I can’t help thinking how terrifying it must be, to share your deepest, rawest emotions with a room of strangers. “Oh absolutely.” Frank nods, “Absolutely. That’s the big decision I felt like I had to make going into the writing process; do you want to kind of fail what you’re saying and play it safe, give people what you think they want… or do you just say ‘fuck it’ and do everything you’ve ever wanted to do. That’s what I felt like I had to do.”

There is definitely something comforting about the cathartic nature that lies at the heart of Parachutes. People connect to honesty, and the intensity of the crowd during their set reflected this; people of all ages were able to lose themselves in the unrestricted vocals and the ferocious guitars as the frontman laid his heart out for all to see. “I only connect to honesty and realness”, Frank agrees, “When people are pretending or acting you can smell it from a mile off… How many people are in the world right now? 7 or 8 billion? It’s a lot of people. We have that many people, why would you want to be someone else? We have that already. The only person we don’t have is you.”

On previous tours, I’ve seen Frank and the band, formed of Matt Olsen on the drums, Evan Nestor on lead guitar and Steve Evetts playing bass, performing as Frnk Iero and The Cellabration, however this time they were Frank Iero and The Patience. I was intrigued to know about the reasons behind this name change, and whether there was a deliberate departure from Stomachaches and The Cellabration in forming the new material.

“I feel like you go into the studio and you put everything you have into this record and you come out a different person, a different band, yet you have to call yourselves the same name… so it’s sort of a way to get around that. If you’re gonna be different people, you might as well be called something else.”

“It was always gonna be my name because it’s a solo venture, but I had the ability to call the band whatever I wanted. The first time around I wanted to name it something I needed to bring with me; this kind of celebratory idea that would detract from my deficiency as a front man, because it wasn’t something I ever imagined I would do… But this time around I didn’t need that anymore. Now what I feel I need help with is patience, to live in the now and be happy, so that’s what that is about.”

It is clear that Frank has become a lot more comfortable in his role as a front man, but that doesn’t mean touring doesn’t still remain a daunting experience for him. “I think I work well when I’m scared shitless”, he confesses.

But while touring may scare him, he also describes it as one of his ‘parachutes’; the concept behind the album title being the idea that a parachute is one of the enjoyable elements of life that make the inevitable fall that bit easier. “I think parachutes can be anything in this context… anything that brings you joy, shows you what love is, makes your mouth open up in awe. I think those things are what allow us to see the beauty in the ugly. The beauty in the world.”

It also helps that this time around they’re touring with Taking Back Sunday, a band Frank has toured with as part of several of his projects, going way back to Skatefest in 2002. “It’s always fun to be able to play with bands that you respect as musicians and as artists, but also are great people that I kind of grew up with. It’s a good time always.”

And as for being in Manchester? “I fucking love Manchester. But I’m a little upset I’m not closer to Curry Mile.” He laughs. I had no idea Curry Mile was so renowned.

While Frank Iero and The Patience’s tour is coming to a close now, Parachutes is only just coming into its own. “2017 is gonna be a big year. It’s the year we finally get to see Parachutes grow and be a real boy.”

I, personally, cannot wait. But I had just one more question I wanted to ask, something that, as a fan, I really wanted to know Frank’s opinion on. While 2017 is set to be an exciting year for the band, it is also set to be a difficult year politically for many. As increasingly, music is being used as a tool to express political opinions and stances, I was interested in knowing what Frank’s feelings on this were.

“I feel like now is a very important time for artists. We are living in a world that is incredibly fear-based and that fear stems a lot from ignorance and then manifests itself into hate. I think artists have a big responsibility to show people what it is to be human again and to promote unconditional love.  I think that it is the most important message that music and art can put out there. There is a lot to be said about resistance and picking up signs, but we can’t forget that the only thing that’s going to save all this fucking atrocity and scariness and ignorance, is love. It really is, it’s the only thing that’s gonna save humanity.”