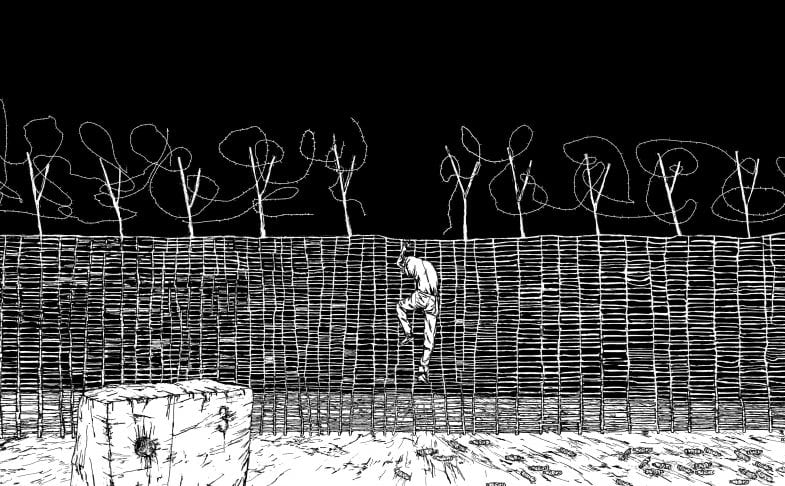 Castlefield Gallery will host a solo show in animation by Andrew McDonald this spring. The exhibition will unveil two new works, along with an array of existing pieces created during his practice over the last two decades.

Throughout all of his works, McDonald focuses on the theme of repitition, involving him drawing the same images over and over again. The animations he creates tend to revolve around one central figure caught in a black and white dark surroundings, on a constant loop. His latest creation is slightly different.

According to Castlefield Gallery: “In a new two-channel video installation Fence/Hammock (2017), McDonald introduces two separate figures that are both busy striving for escape. One figure struggles with the entrapments of his hammock, who then fatigued from his multiple attempts to find freedom, remains caught in an inescapable stupor; perhaps content to simply dream of freedom, to dream of another place. Another figure climbs over a fence and runs off, only to reappear on the screen. The figure is relentless in repeating these actions, despite making little progress at all. Where is freedom to be found here, on the other side of the fence or in resolving to make peace with the futility and absurdity of the situation?”

Castlefield will also host the premiere of another of McDonald’s latest works called Restlessness (2017). Following the flow of liquid as it gurgles, splatters and stagnates, Restlessness explores the never ending journey of free-flowing water. Some of the artist’s works that will sit alongside these new debuts are Everyone wants revenge no2 (2009), Bucket (2013) and Comfort falls (2015).

Andrew McDonald’s approach to animation is quite astounding. He first set out on his creative path using tracing paper, then incorporated photocopying, editing the images scanned into his computer. Today he uses a graphics tablet, allowing him to draw directly onto a computer.

McDonald himself said, “I lose myself in the process of drawing, an escape from the world, but the end result, an art-work, is the opposite — a confrontation with the world.”

The artist’s images truly take on a life of their own, and are unequivocally exciting in their unusual ability to repulse audiences whilst compelling them to pledge their time to them. This is undoubtedly one of this spring’s most exciting exhibitions landing in Manchester.