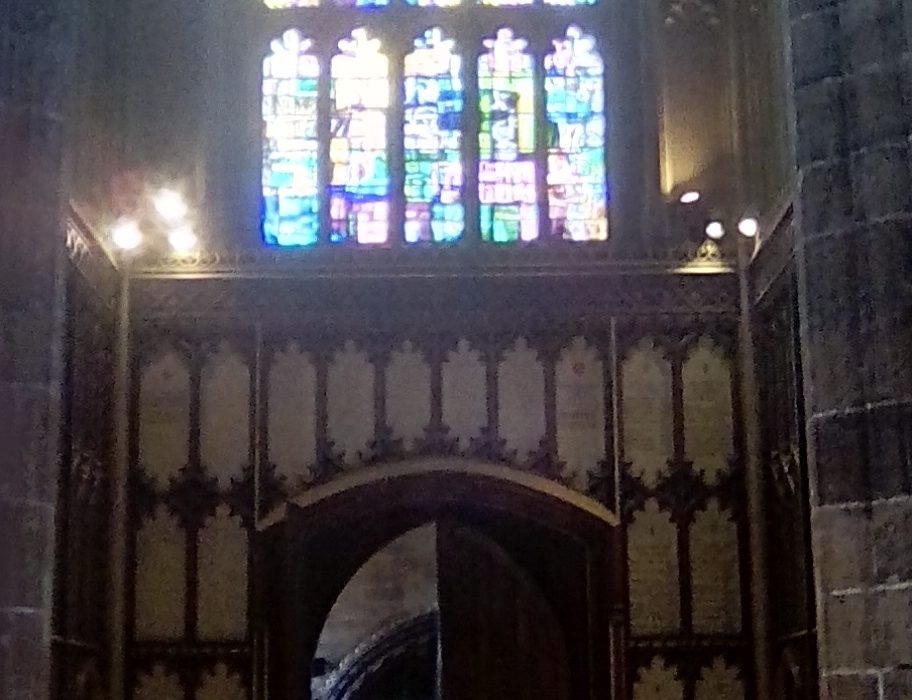 As part of the International Women’s Festival, Manchester Cathedral currently has an installation by Chinese artist Mei Yuk Wong.

‘What the Feminist Theologians say…’ consists of a black cloth which has been embroidered with gold thread depicting quotations from feminist theologians from around the world, and will be on display until March 26th.

The artwork is draped over a table beneath the beautiful stained glass windows in the Tower space and invites visitors to get in close with quotations on all sides of the hanging cloth. One visitor commented on the striking materials used saying: “Love the black block with gold – bit like Mecca.”

Mei Yuk studied Theology in Hong Kong and Feminism in Holland and highlights “justice, spirituality and women’s issues” as particular interests of hers. She wrote in her artist’s statement: “Though we are living in the 21st century, women’s voices are still missing on many levels. To me it’s important to make women more visible. Often they are hidden by society and world history.”

In relation to this particular piece she wrote: “[The] quotations can ignite thought-provoking discussions on social, political and theological issues”, and that she was “keen to show the work in the Tower space because the walls are covered with the names of mainly prominent male figures. The new work therefore exists in striking contrast to this context.”

Andrew Hardman is a Heritage Researcher at the Manchester Cathedral and an alumnus of the University of Manchester where he completed a PHD in Art History.

Hardman talked to The Mancunion about the cathedral’s history of social engagement: “We have a centuries-long tradition of radical thought at the cathedral despite what people might imagine about how cathedrals operate. [For example] in the 19th century we were in the world’s first industrial city and the clergy here were really involved in alleviating poverty…[also, the Very Reverend] Alfred Jowett, was the first Chairman for the Campaign for Homosexual Equality in the 1960s.

“At the moment, we have our Dean who is heavily involved in ‘Challenging Hate’ which is a program in the city… around hate crime and alleviating hate crime.”

In addition, William Temple, who was Bishop of Manchester in the 1920s, went on to help form the welfare state. The Cathedral frequently works with different artists and organisations and as well as the IWF artwork, currently have an exhibit on political prisoners.

When it comes to engaging with the public, Hardman added that “We’ve got this whole heritage of radical thought which people don’t expect. We like to surprise people with it.”