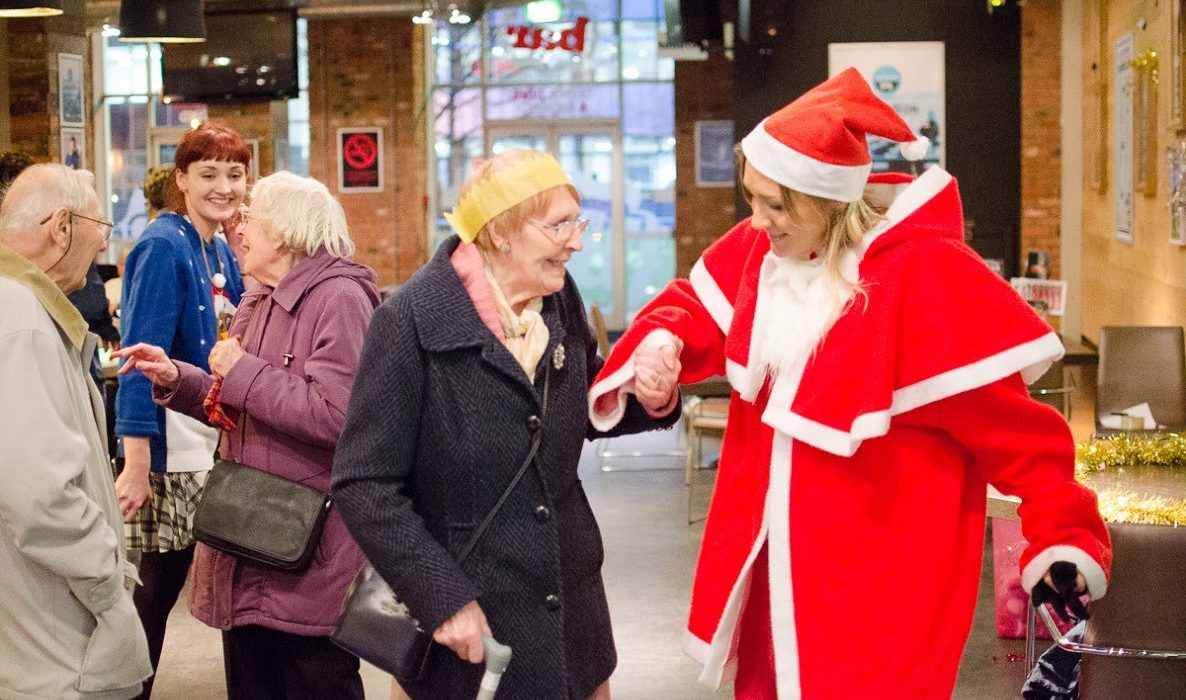 How intergenerational projects are tackling the loneliness crisis

As the UK’s population ages, loneliness amongst the elderly is quickly becoming an epidemic.

Loneliness and isolation are bad for our health too, with a lack of social interaction being as harmful as smoking 15 cigarettes a day — more dangerous than obesity or not exercising.

Clearly, the problem is an important one, and it needs tackling. With this in mind, the Intergenerational Projects group at the University of Manchester Students’ Union set out to get elderly people in the local area together for parties, film afternoons, and a whole host of other activities.

“People forget what difficulty people can face just by being older,” said Charlie Spargo, one of the group’s project leaders. “I think it’s important to help out people, especially those who are often alone — living alone or having lost a spouse — to give them a chance to have a more normal experience by mixing with friends, making new friends and keeping active and engaged in society.

“We’re all volunteers who work with elderly people in the local area. We invite them to normally four parties a year in the Students’ Union, where we put on entertainment and food and a few drinks for them, and give them a nice afternoon of time with their friends, who they’ve met normally through the parties, and a chance to socialise with people.”

Tackling loneliness is hugely important to the group. “A lot of them are inside all day, and both the parties and film afternoons are to hinder isolation and make sure they get something out of their time,” said Lise Albertsen, the group’s co-ordinator and general leader.

“It gets them out of the house if they’re at risk of isolation,” agreed Charlie. However, the group do not settle with just providing a chance for people to socialise. “We don’t just put them in a room and have a party, we always make sure that they’re doing something”, Charlie emphasised, “like bingo or a quiz or listening to music put on by student groups, and try and give them as good a time as we can.” The group even hosted a recent cheese and wine party — though they received some complaints about the cholesterol levels.

These events are popular too, with numbers increasing all the time — there are now a total of 148 now on the invitation list, and their last party brought together around 70 attendees.

The group are extremely keen to improve the relationship between students and the wider community. “It’s of massive importance,” Lise told me, “especially when you’re a student you kind of get locked into the campus — the campus and your home, and you don’t really see the rest of Manchester.”

“It can be a bit sad when you see someone who’s just done their university degree and never gone off the beaten track — never met anyone who wasn’t a student, and then they leave and never come back,” said Charlie. “I think that’s sad.”

The intergenerational events highlight just how easy it is to fall into this idea of a student bubble. According to Charlie, “a lot of the guests to the intergenerational parties are from the areas that we associate as just students, but actually there’s a little community of their own that they get involved with”, demonstrating not just how noisy and obnoxious students can be, but how easy it is for them to ignore the rest of the community, particularly the elderly.

Intergenerational projects do not just help the elderly, however: “It’s very much a two-way connection — they gain from us and we gain from them,” Charlie explained.

“You see it with the volunteers,” Lise elaborated. “Most of them have never worked with the elderly, and then they come out of their first volunteering session or film afternoon or party, and they’re so excited and they’re so happy and they’ve spoken to people and got to know stories — they just love it.”

“We’re not just volunteering out of duty,” replied Charlie, “we also really do enjoy it because they’re just a great bunch of people to spend an afternoon with.”

“They’re so kind, and funny, and sassy,” Lise said, beaming. “Some of them have definitely got an attitude,” Charlie admitted, “but they just want to have a bit of fun, make a bit of trouble sometimes.”

Loneliness amongst the elderly is a serious problem — the UK is a country where two-fifths of older people say that their main source of company is their television. “In Britain especially, we have a tendency to leave behind people over a certain age,” said Charlie. “It’s easy to forget about groups of people like that, and I don’t blame anyone for doing it.”

The group may not blame anyone for failing to include the elderly, but that does not mean they are happy about it. “They’re so smart and clever and funny, and I think they’re being forgotten in society,” Lise complained. The group accept that they do not know “what the solution is” on a national level, but their efforts certainly make a difference here in Manchester.