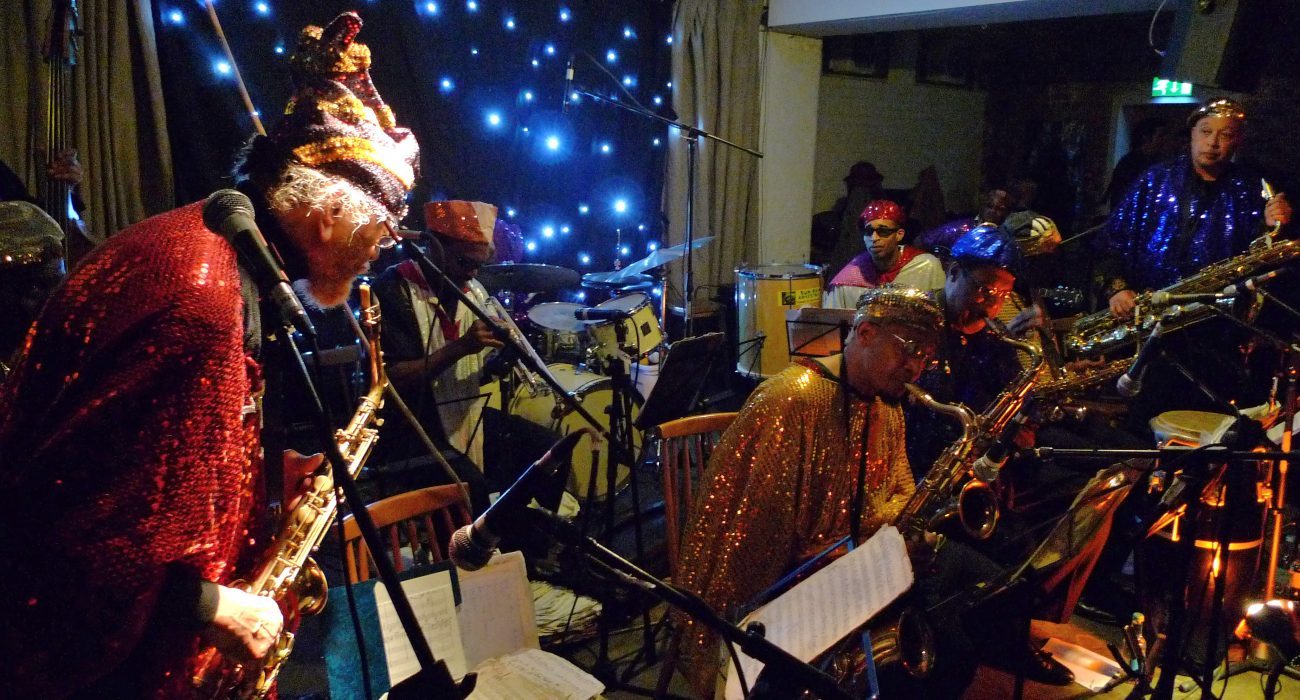 15th April at Band on the Wall

You arrive at Band On The Wall to see Sun Ra Arkestra, but you’re a song late. The silver lining is that when you make your way into the gig, the band is in full swing. If there wasn’t a  sea of heads in your way, you would have been immediately dazzled by the sequins that coat the members onstage. Colourful doesn’t quite describe it; glistening sounds too delicate. Sun Ra are glamorously gaudy.

You had held a hat-themed party the night before, and your mate whispers to you, “they definitely would’ve won the prize for best hat”. “Which guy?”, your other friend asks (they’re all wearing variations of hats), but your first mate just shrugs. All their hats are pretty incredible. You settle into the music. It’s finger clicking stuff, real jazz stuff. But it’s Afrofuturist. The movement of non-Western cosmology was basically pioneered by the late Sun Ra, so this is no surprise. The part-extraterrestrial, part-cultural costume of the ensemble is perfect for the sounds you hear. They’re unfamiliar, but seductive. You’re transported to another world.

‘Space is the place’. It’s impossible not to notice the feline voice that curls round the blare of brass. It’s softer and smoother than you would expect of a lady wearing forest green lipstick, but it’s also a voice as striking as one would imagine. Entranced by her personality, you search her for clues and note that although her shoulders are all a-sequin-verde, she wears a t-shirt that says ‘ASTRO BLACK’. As the performance continues, you begin to feel that you understand Sun Ra’s obsession with space, but you can’t actually have understood it on more than a surface level, because really you’re dazed and confused by it. In a good way, in a great way in fact, but your spirits are dampened, for you can only long to be a part of the scene.

The galactic theme that runs through the jazz vacuum adds a whole other dimension of special to the orchestra’s rendition of the Disney hit ‘When you Wish Upon a Star’. Pinocchio has never been sexier. But at moments, it’s never been squeakier. The band isn’t consistently smooth, and can be quite offensive on the ears at times. You wonder if this is part of the statement they’re making; you didn’t find it unpleasant, but your nose would get longer if you said that you thought the experience wouldn’t have been made better by a quieter approach.

Sun Ra just wouldn’t be Sun Ra if they weren’t so experimental though, so there’s no real way to get around this minor conflict. It’s jazz, you tell yourself. Jazz is freedom: it’s a genre that tells you to put the cat in a bag and throw it down the stairs. Jazz ought to be unsettlingly loud and it ought to be confusing. Just don’t go with a hangover next time, perhaps.

You were so mystified by the brilliance of the group that you look around to find yourself separated from your friends. Suddenly there’s brass behind you. A trio of trumpeting and tromboning bandmembers emerge. They find their way past you, right next to you, within centimetres of you. The brassy tones come in rhythmic threes too. The pace of the music slows. It’s calmer, but it’s thrilling. You’ve made real contact with the third kind: casual, fun contact. You feel a bit ashamed of yourself for filming it.

You feel absolutely no guilt for getting footage of the alto-saxophonist, Marshall Allen. At 92 years old, although he’s a gemstone of a relic, he’s also the Arkestra leader, and lead he does. Allen has remarkable command of his mouthpiece, as well as your attention. The band in its entirety offers soulful riffs and sharp interludes to take you back, way back into a decade of bar culture, but its energy and youthful sass carry you into the future. Sun Ra Arkestra is space soul personified.