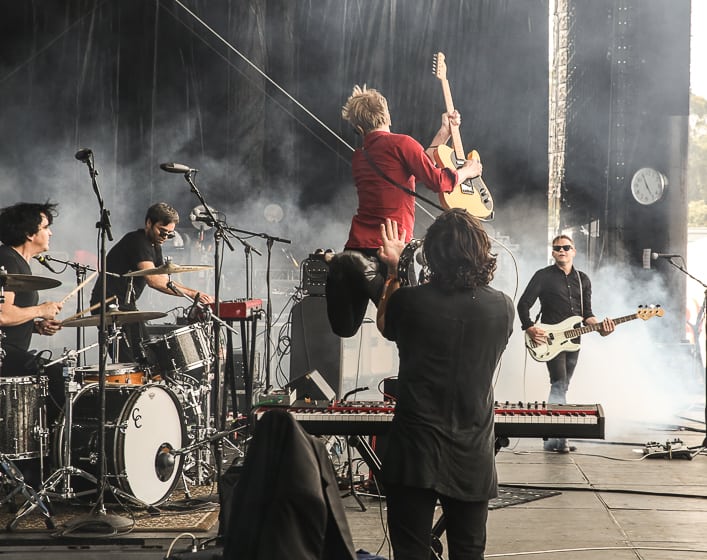 Spoon are a band perpetually at the top of their game – every single record they have released since 1997’s Soft Effects has been seemingly effortlessly great, and they only get better the more you listen.

This year’s Hot Thoughts is no exception, the band once again creating a blinder of an album better than anything since, well, their last one.

With this latest success in mind, as well as the band’s upcoming UK dates with Adam Buxton (which is a frankly genius choice, Buxton’s ridiculously consistent brilliance making him comedy’s answer to the Texan indie rock greats), we called up multi-instrumentalist and generally lovely man Alex Fischel to talk everything from ambience to impeachment.

We started with the response Hot Thoughts has received, and Fischel was happy, though modest, about its near-universal critical acclaim. “It seems like it’s been pretty good”, he told us, “it’s been a fun thing to get the new songs together and play them for people.”

The record has been described by many critics as quite a big departure from Spoon’s previous work, and whilst it is clearly the same band, it uses a very different set of textures and colours to their previous work. “Yeah I’d say so,” Fischel agreed, “I mean for one thing there’s certainly a lot more keyboards – and not just piano or natural, more acoustic sounding instruments – we opened up more of a synthesizer world a little bit and kind of went down that road.”

The guitar, the traditional cornerstone of a Spoon record, is now a far less integral element. As Fischel said, they’re “still on the record, but when they’re there it’s more of a statement”.

Fischel is responsible for all the synths in Spoon, so was this shift down to him? “I’d say I had something to do with it, yeah”, he told us, “I mean that’s my instrument, that’s what I learned to play music on with piano, and then through that you kind of expand as you learn about more.”

However, he insisted it was not a conscious choice to bring his talents to the front. “It wasn’t really a decision, it kind of just happened”, he explained, and instead he believes the shift is really more of a continuation of what came before. “The last song we worked on for the last record, They Want My Soul was ‘Inside Out’ and that was already kind of going in that direction a little bit, where it’s more keyboard-based, more soundscape-y, and I think we kind of just picked up where we left off when we started working on the material for Hot Thoughts.”

This more experimental turn was perhaps also down to producer Dave Fridmann (most famous for his work with the Flaming Lips), but not in the way you might expect. “His place is kind of out in the middle of nowhere in upstate New York,” Fischel told us, and this relative isolation even limited what Spoon could listen to whilst making the record, as “in the kitchen there’s a little CD player and that’s the way you can listen to music.” This meant they listened to a somewhat limited selection of music, at least compared to the infinite choice of something like Spotify.

“We burned some mixes,” Fischel elaborated, listing the likes of Talking Heads, Thee Oh Sees, Miles Davis and John Coltrane, as well as Lodger, Bowie’s weirdo peak (or nadir, depending on how you feel about these things). These records can all clearly be heard on Hot Thoughts, and with good reason – according to Fischel “you end up listening to the same stuff over and over again cos you had to go and make CDs if you wanted them.”

Bowie in Berlin is perhaps the most obvious influence on the album, especially on its two ambient centrepieces ‘Pink Up’ and the stunning ‘Us’. These two tracks are the biggest departures, and are totally different to anything Spoon’s done before, so we wanted to know how they came about.

Fischel was more than happy to tell us. “’Pink Up’ is more of a studio piece,” he explained, “that one just grew and grew and grew and eventually we were like OK!”  He was also particularly pleased with the focus on texture over traditional melody. As he put it, “there’s proper vocals on it, not just the reversed effected vocals, but they don’t come in for a while, and I like when they come in but it’s not the whole focus of the song.”

The closing track, ‘Us’ came about almost by accident. “So originally we were looking for a sax player – again Bowie – to do a part of a song, and I live in LA and I have a friend who knows a tonne of different musicians, so I went to him and asked if he knew anyone and he recommended this guy Ted Taforo,” Fischel began, “and Ted went over to Britt [Daniel, Spoon’s singer and guitarist]’s and listened to the song, and I think he listened like twice and was like “OK! I know what I wanna do.”

Britt hit record and he played through the whole thing, then he was like “OK give me one more track” and played through once more and harmonised with what he’d done originally, in time and in rhythm and all of that. He was in and out real quick, it was like thirty minutes or something.”

“Later that night Britt went back to listen to it”, Fischel continued, “and he muted the rest of the song and just left the saxes and was thinking wouldn’t it be cool if we just did a song based on those saxes? And that’s how that song came to be.”

This shift towards a more ambient is something the band, or at least Fischel, would definitely like to explore further. “I would love to”, he enthused, “I love that kind of stuff, I’m a huge Brian Eno fan.” However, a more experimental sound makes it more difficult to play these songs live, and Fischel said the band are still trying to figure them out for a live setting. “I mean playing ‘Us’ I don’t know how we’d do that. We’d need a sax player, none of us can really do that”, he admitted, “but ‘Pink Up’ we’re working on getting together right now, we haven’t physically tried playing it yet but we’ve discussed it a lot.”

Hot Thoughts is not just noticeable for its experimentation, however, but also its tense atmosphere. The song ‘Tear it Down’ is perhaps the most explicitly political track (“let them build a wall around us/I don’t care I’m gonna tear it down” goes the chorus), but the whole record seems to be at least partially influenced by the political turbulence surrounding us.

The album was recorded before the U.S. presidential election, though, and the band were hoping it would just be a reminder of past times rather than reflecting any ongoing crisis. “When we were making the record we were hoping that this would be like dust in the wind and this point, like the record would come out and this wouldn’t be an issue any more”, Fischel said sadly, “but unfortunately things didn’t work out that way, and we have a pretty messed up situation right now.”

Messed up situation seems to be putting it lightly, “Oh I mean there’s so many different issues to talk about, that’s a whole other conversation”, agreed an audibly despondent Fischel. “It’s really messed up. It’s depressing. It’s constantly depressing. It’s every day waking up and seeing the news and thinking is this real? This can’t be fucking real. And it’s real.”

However, Fischel does look for the positives, even in as bleak a situation as this. “If anything, maybe it’s given people a sense of renewed spirit or resilience or duty that they feel to start standing up and speaking for what they think is right”, he told us, “cause this cannot go on much longer, it’s just the worst.”

And how much longer does he think it will go on? How long will Trump will last? “Ideally not another day, but I’m on a watch list for saying that now probably”, he laughed, “you know, he has his four years, and hopefully by the time those four years are up people come to their senses and we can right the course a bit.”

But for Spoon, things are still on a seemingly constant upwards trajectory, and the band have a packed schedule to capitalise on the success of this fantastic album. “We’re gonna do some shows back here in the UK and Europe and then do more shows”, Fischel explained excitedly. “Shows shows shows,” he added. Shows.

And finally, what advice does Fischel have for any bands just starting out? “Uh, ah, oh,” he laughed, “I don’t know. Don’t listen to me. That’d be my advice.” Well he may not be a brilliant motivational speaker, but he’s a brilliant musician, and we can’t wait for the next inevitable Spoon masterpiece.