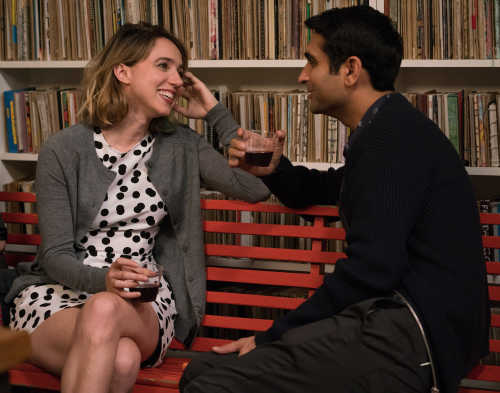 The Big Sick is the true life tale of how Kumail Nanjiani fell in love. In love with a girl that just broke up with him and who’s now in a coma. Absurdly funny, intelligent and at times heartbreaking, this film is proof that the Rom-Com genre is not out of ideas just yet.

This is not the first time Judd Apatow has brought a relatively unknown comedian into the limelight, think Steve Carrell in ’40 Year Old Virgin’ or Melissa McCarthy in ‘Bridesmaids’. He has an incredible ability to spot talent and cultivate them into Hollywood superstars.

Nanjiani’s performance demonstrates the ability we have seen in his previous projects such as Silicon Valley and proves he can hold his own in a leading role of a feature film. It would be tremendously disappointing to see him relegated to bit parts or supporting roles and I hope this marks the beginning of a new chapter in his career.

Kumail’s character is both a comedian and an Uber driver. It is both of these professions that helps him meet Emily. At one of his shows Emily shouts playful encouragement, a “woohoo,” which Kumail points out is heckling regardless of intention.

Following the show he continues talking to her about her abhorrent rudeness, leading to flirting and an eventual night of passion. Afterwards, she decides to leave citing that she is not ready for a relationship, and calls an Uber. Suddenly Kumail’s phone starts ringing, and so begins a series of ‘this is the last time’ Uber based dates.

Despite Nanjiani being Pakistani born, he is not presented as different to any other character. While this may seem a meaningless statement, the implications are far from it. All too often major releases make a big song and dance about diversity, The Big Sick revels in its grounded, realistic treatment of everybody regardless of creed or colour. The only exception for this is during a scene at a stand up show when a frat boy shouts ‘Go back to ISIS’. His character is the only one that seems out of place, a gentle point towards a deeper meaning.

This grounding extends to the humour as well, with an unpredictability that keeps the viewer sharp. The highlight of which is during the first conversation between Kumail and Emily’s parents, Beth and Terry, played fantastically by Holly Hunter and Ray Romano.

Terry starts by saying how he always wanted to have a conversation about 9/11 with someone like him. After an awkward pause, Kumail expresses his sadness at losing ’19 of our best men’. Another notable moment is earlier on where there is a major toilet humour joke without it seeming overly crass.

Weighing in at just under two hours, as with all Apatow films, it is a tad lengthy. 5 to 10 minutes could be shaved off to become more streamlined — the second act is slow at times — but this complaint is minute in comparison to the phenomenal accomplishment of Kumail and, spoiler, wife Emily Gordon.

To take a traumatic personal experience and put that on the big screen for everyone to see is incredibly courageous. The countless rewrites the script underwent is evidence of their determination to create the best possible version of their story. The resulting product is truly fantastic.

In this genre, the two pivotal components are emotion and humour. The majority of entries either do one competently or both adequately. To achieve both so effortlessly and in such large doses is the sign of something special, a movie that will be remember far beyond the end of its cinematic run.