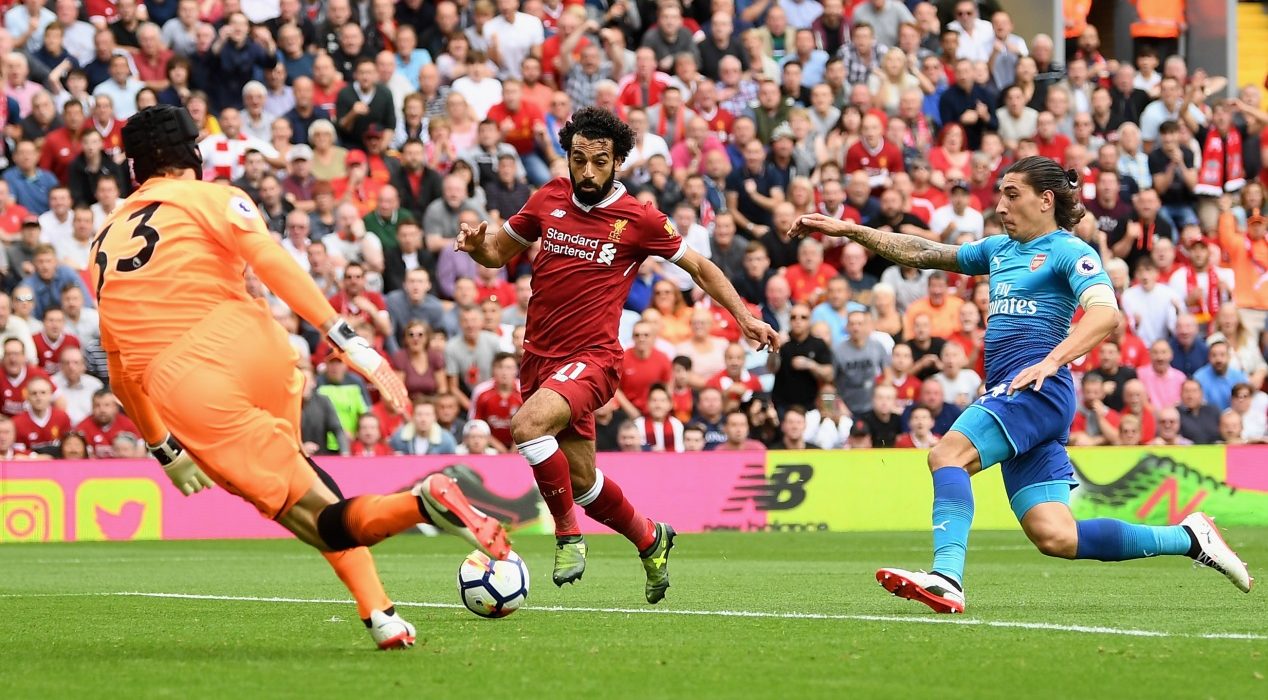 There were always going to be goals in this game.  The past four fixtures between the two teams have seen a total of 21 goals scored.  The most memorable of these came in the opening weekend of the 2016/17 season when Liverpool came out victorious in a 4-3 win at the Emirates – their first win away at Arsenal since 2011.  Jürgen Klopp’s team went on to win the reverse fixture comfortably 3-1, and Sunday’s game saw Arsenal looking to exact revenge for the double defeat of the previous year.

Unfortunately for the Gunners, it could not have gone any worse.

Right from the start, Arsenal were on the back foot.  Aside from a fluffed chance from Welbeck early on, Arsenal could not penetrate the Liverpool penalty area, and when Roberto Firmino headed in the opener, they crumbled.

Before half time Sadio Mané curled in a sublime shot after effortlessly cutting inside Arsenal’s 18-yard box, and following the break, Mohamed Salah sprinted over half the length of the pitch with the ball before coolly slotting in past Petr Čech.

With 13 minutes left on the clock, the Egyptian turned contributor as he crossed immaculately for substitute Daniel Sturridge to nod in the final nail in the coffin.

Both managers made shock decisions on their team sheets prior to kick off.  The in-form Simon Mignolet was dropped for the demoted Loris Karius, making his first league appearance for Liverpool since December. Arsène Wenger opted to swap summer purchase Alexandre Lacazette for Danny Welbeck.  Both calls were met with bemusement by the two sets of fans, yet it was the latter that proved the most damaging.

Going into half time 2-0 down, it was thought Arsenal’s £52.7 million Frenchman would be brought on to add some much-needed flair into their lacklustre offensive performance.  Instead, Wenger chose to bring on holding midfielder Francis Coquelin in assumedly an attempt to give Granit Xhaka more support in the face of an energetic Liverpool midfield.  The decision proved futile as Liverpool enjoyed a further 45 minutes dominating the centre of the pitch, often leaving Coquelin trying to cope with the entire Liverpool midfield on his own.

Salah appears to have exorcised the ghosts of his disappointing spell at Chelsea and has made a seamless transition into Klopp’s team.  Despite a tendency to stick to his stronger left foot, Liverpool fan’s mouths will be watering at the prospect of Salah mirroring the whirlwind threat of Mané on the opposite flank.  You’d be hard pressed to find another team in the league with as much pace as Liverpool do in their attack.

Liverpool’s inconsistent defence had embarrassingly little to do.  Joël Matip was dominant at the heart of the defence, and even Alberto Moreno stood his own against future team-mate Alex Oxlade-Chamberlain.  However, they will undoubtedly face tougher challenges as the season progresses, and would have benefited greatly if they had managed to secure a happy ending to the transfer saga of the summer which is Virgil Van Dijk.

As for Arsenal, they could be looking at a similar situation to the dark years Liverpool faced following their booting from the ‘Big Four’ in 2010.  Alexis Sánchez has been subject to several bids from Manchester City, and judging by his body language on Sunday he wouldn’t need his arm twisting to swap London for Manchester come January.

With Oxlade-Chamberlain now having joined Liverpool in order to attain more game time in central midfield, and after the club withdrew interest in Monaco winger Thomas Lemar, Wenger is looking at yet again ending a transfer window with a profit.  Arsenal have the weakest squad out of the top six, and they could very well be looking at consecutive seasons in the Europa League.

Regarding Liverpool, the future is bright.  After a successful transfer window – albeit without the arrival of a new centre-back – the Merseyside giants finally have the depth required to contend in the Champions League as well as at a domestic level.

Man of the match: Sadio Mané

The Senegalese forward has hit the ground running this season after an excellent debut year at Anfield.  He has a creative footballing brain rivalling that of disillusioned team-mate Philippe Coutinho, and his lightning quick pace makes him a nightmare for any defence.  He made life hell for an Arsenal back 5 which included Héctor Bellerín and Oxlade-Chamberlain, who are no slouches themselves.