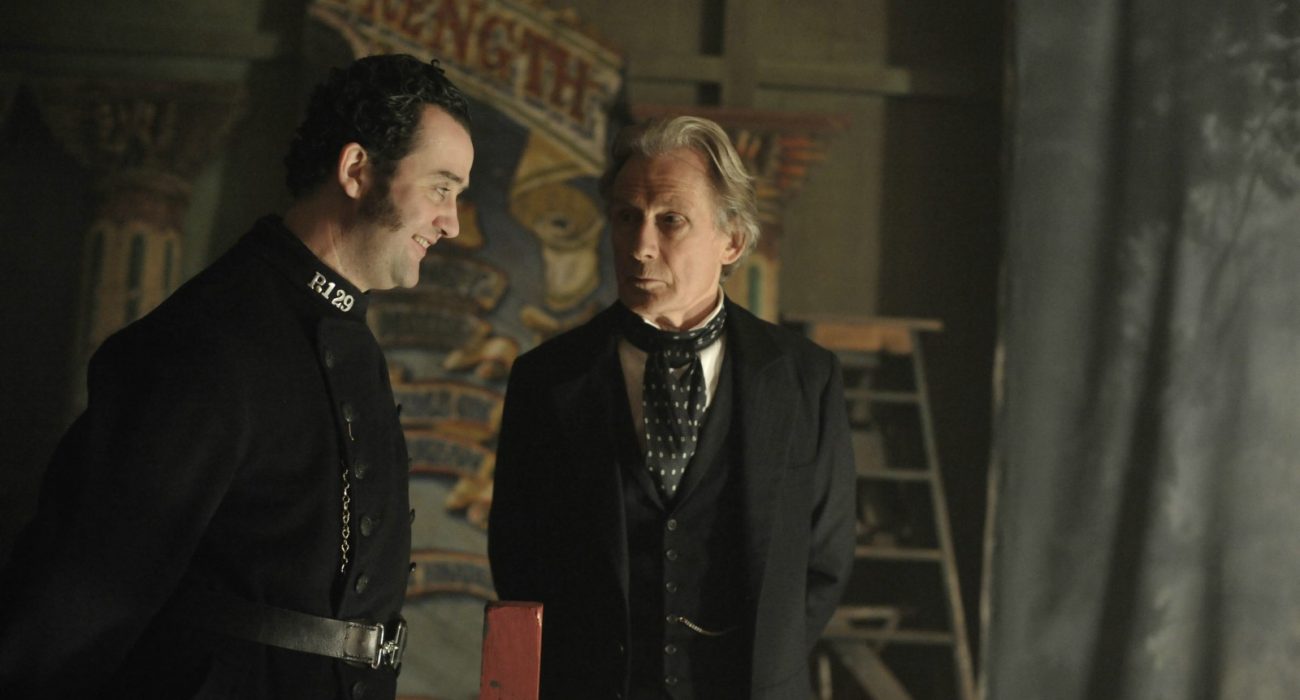 In an age where the big screen rarely sees period dramas, The Limehouse Golem is a breath of fresh air. Combining crime with the gothic, this cinematic re-telling of Bill Ackroyd’s story is a mystery which – with a ‘15’ BBFC certificate – packs a punch with its morose murders and mutilated victims.

Bill Nighy leads a superb cast as Inspector John Kildare, who is assigned to the case of the ‘Limehouse Golem’ (the name taken from a monster in Jewish folklore), in order to spare the blushes of Scotland Yard poster boy Inspector Roberts, whose pursuit of the Golem has been unsuccessful.

However, leads begin to materialise as Kildare finds a book which appears to have the scrawled journal entries of the eponymous killer. Four suspects fall under the scrutiny of Nighy’s inspector: philosopher Karl Marx (the one and only); real-life novelist George Gissing; Victorian performance artist Dan Leno; and the only fictional accused – John Cree. The snag is that Cree has recently been found dead, and his wife, Elizabeth Cree, is accused of poisoning her husband.

Kildare believes ‘Lizzie’ to be innocent, and regularly seeks her help as she waits on death row, believing her deceased lover to be the Golem. The rest of the story is a race against time, as the inspector – accompanied by Daniel Mays’ Constable Flood – seeks to unmask the Golem before Lizzie hangs.

Bill Nighy was always going to be in his element here. He assumes the role of Inspector Kildare with tenacity and charm – a part which was originally going to be played by the late Alan Rickman. Oliva Cooke is equally impressive as Lizzie Cree and Douglas Booth is hilarious yet brooding as the eccentric performer Dan Leno. Other big British names complete an excellent supporting cast, such as Mays, and Eddie Marsan as the unnervingly friendly ‘Uncle’.

For those unfamiliar with the original story, the inclusion of Karl Marx may come as an odd shock, but Henry Goodman does a terrific job of playing the Prussian philosopher. Morgan Watkins’ fleeting portrayal of English novelist George Gissing is less convincing, yet commendable nonetheless.

The pursuit of the murderer is slow-burning and is littered with graphic, somewhat theatrical ‘re-enactments’ of the Golem’s crimes, imagined by the protagonist with a different suspect as the killer in each vision. The twist is rather predictable, yet Kildare’s revelation and the toll it takes on him is what makes The Limehouse Golem’s ending so effective.

The film is doubtlessly one of the better Victorian ‘gothic’ adaptations to be released recently (2007’s Sweeney Todd and 2009’s Dorian Gray were disappointingly dire). However, some will find that the crime is just not compelling enough. None of the suspects are really given enough screen time for there to be any real element of a progressive investigation – instead, all of Kildare’s significant leads come from Cooke’s Lizzie.

Perhaps we have been spoilt with the array of superb Scandinavian murder mysteries such as The Killing and thrilling American crime-dramas like True Detective. Still, the fact remains that throughout the film’s entire narrative there are only two credible suspects, and at times I found myself just longing for the investigation to be over and done with.

The theatrical feel of the movie will divide audiences – for some, it will feel too much like a stage performance. It is this tone which makes the film thrive during the scenes in the Limehouse Music Hall, where Leno and Lizzie perform. There is also the occasional feel of a TV drama, and some viewers may find themselves wishing the story had been adapted as a series for the small screen, as opposed to a cinematic production.

Nevertheless, director Juan Carlos Medina and screenwriter Jane Goldman have produced an authentic and spirited film which Ackroyd will most definitely endorse.  It is a return to form by Nighy after the disappointing Dad’s Army movie last year, and rising star Olivia Cooke is terrific. It is the acting which is ultimately the film’s pièce de résistance, and occasionally its saving grace, amidst messy timelines and anti-climax. Despite never really breaking new ground, The Limehouse Golem is an entertaining adaptation of a Ripper-esque tale with a feminist twist.