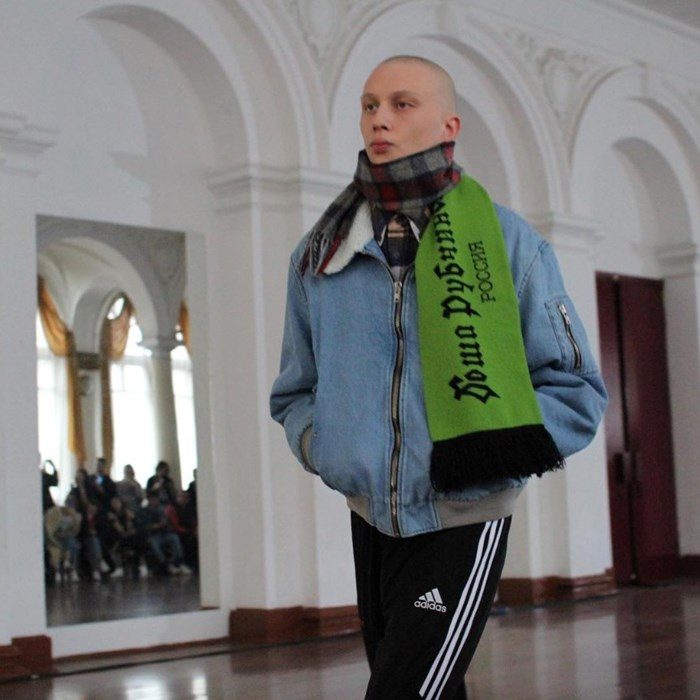 If you haven’t heard his name before, you soon will.

Graduating from Moscow College of Technology and Design, Georgiy Aleksandrovich Rubchinskiy launched his fashion design career with his first collection Empire of Evil for SS/09.

Rubchinskiy’s designs are inspired by post-soviet Russia. After the collapse of the USSR in 1991 and the ending of rigid censorship there was a sudden influx of western culture that penetrated the formerly closed society. There was a new freedom to access previously prohibited and exotic art, literature, music, and fashion from the West.

Rubchinskiy’s designs are shaped by youth street culture, including his own experience as a teen in this new and uncertain time. He is particularly inspired by the youth football, skate, and rave scenes. For example, he has collaborated with several high-profile sporting companies such as Adidas and Kappa. His Adidas collaboration was also influenced by the fact Russia will be hosting the 21st FIFA World Cup in 2018 and features logoed football shirts and scarves. This heavy application of logos, both from sporting and known fashion houses such as Burberry, reflects the post-soviet obsession with western culture and all-you-can-eat style consumerism.

His shows are always held in meaningful locations that reflect his aesthetic. For example, his SS/18 collection was held in the Communication Workers’ House of Culture on Bolshaya Morskaya Ulitsa, St. Petersburg’s. This location was said to have once housed electronica raves influenced by Timur Novikov, a radical artist and originator of the post-Soviet avant-garde. The models walked out to jolting rave music that created an ambiance of illicit fun.

His designs have made such a splash that they are beginning to be emulated on the high street. For example, his logo football scarf (as pictured) has inspired various stores such as Urban Outfitters and Topshop to create their own versions and can be found on shelves across the world.