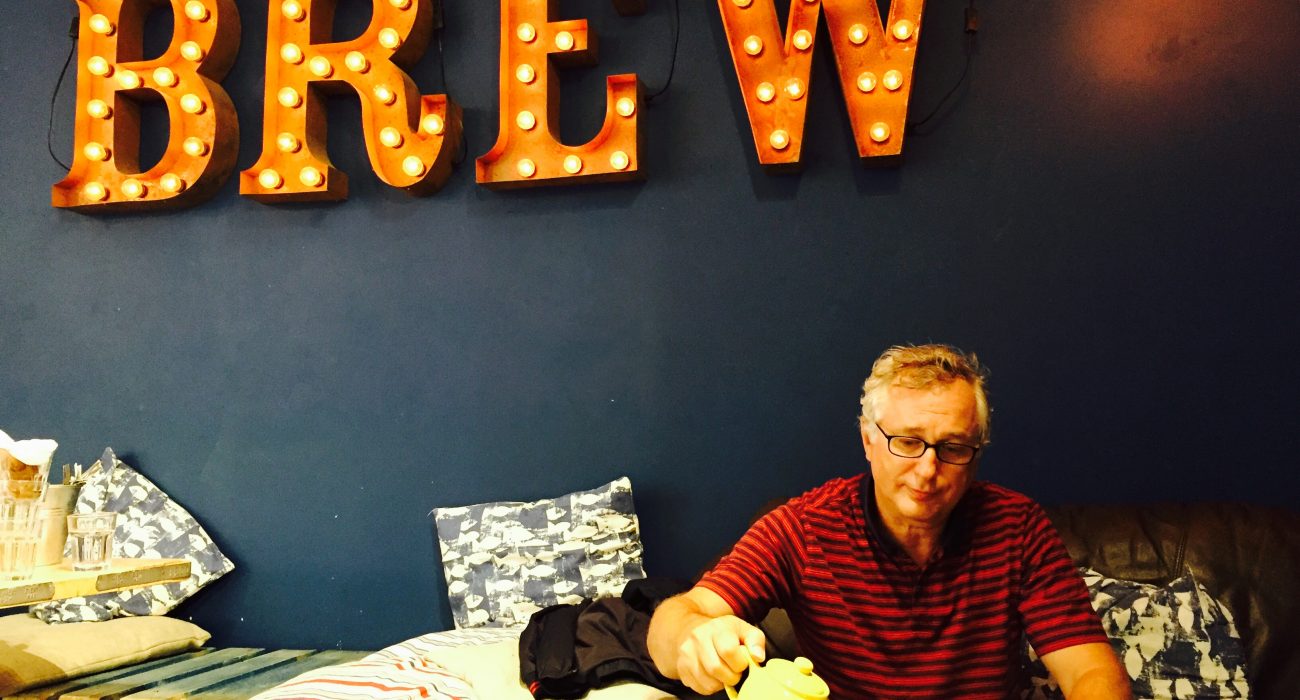 After announcing the upcoming publication of his new collection of poems ‘Raining Upwards’, I sat down with Henry Normal – a BAFTA award winning screenwriter, poet, and comedian — to discuss the launch of the book.

A lot has changed since Normal first moved to Manchester (for love, not poetry) but he maintains that the creative scene is alive and well. This is evidenced by the continued growth and success of the annual Manchester Literature Festival, the predecessor to which (the Manchester Poetry Festival) he co-founded.

Hailing from a council estate in Bilborough, Normal talks of dreaming of a career in comedy, writing, but feeling trapped, largely, by his working-class origins. He describes the life he led in Bilborough as ‘not very creative at all’, his only outlet being jokes and skits he would write down and stick on the walls around his school titled ‘please do not read’, hoping for feedback from his fellow students. He observes that this felt lonely as he was the only one doing it.

After the death of his mother when he was 11, his father raised him and his four siblings alone. Sometimes working seven days a week, Normal says the work ethic his father displayed meant he felt duty-bound to find a “job for life.” After leaving school he secured two jobs, as an insurance broker and as a bartender. Whilst working around the clock he continued to write at night, even drawing on his experiences at work as inspiration for his material. Normal says “the pub was right next to a bus depot. I was very young then, only 18, and all the old bus men used to come in and call me gay boy! But I actually put that into the Royle Family which is why Antony is called gay boy.”

Spurred on by the American comedians he would see at night (a self-proclaimed fan of Richard Pryor, Jack Benny, and the Marx Brothers) Normal quit his job and moved in with his sister to focus on becoming a writer. When asked if, in hindsight, this seemed like a risky decision, he said, “I’d been doing very well at insurance but if I was the best insurance man in  the world I wouldn’t have been happy.” He describes being drawn to stand-up comedy in particular because it provided “instant feedback.” Either people laughed or they didn’t. This quickly became preferable to sending off manuscripts and waiting on rejections.

When asked what his favourite part of the early days of his career was he cited “the sense of community.” During his time in Manchester, Normal made the rounds in literary scenes up and down the country. Performing alongside a then-unknown Pulp in the Midlands, and forging lifelong friendships in Manchester with performers such as Steve Coogan, University of Manchester Chancellor Lemn Sissay, and Caroline Aherne. He eventually launched Baby Cow Productions, a collaborative effort with Coogan responsible for Moone Boy, Gavin and Stacey, The Mighty Boosh, and Human Remains among others.

Around the same time, he worked with promoter Rick Michael to launch what is now the Manchester Literature Festival. Speaking about his inspiration for the festival, Normal notes “I’d done this show called Packet of Three and I wasn’t happy with it. I got a lot of money from it but I was very upset because I thought it was dreadful and I didn’t think it was me. I’d gotten this money and I thought I’m going to do something with this money that makes someone else happy because it’s not making me happy.” The festival proved to be a runaway success, even hosting the poet Seamus Heaney only two days after he won the Nobel Prize in Literature.

But after 30 years in film and television, even producing the four time Oscar nominated Philomena, he resigned and settled in Brighton. On ‘Raining Upwards’ Normal talks of wanting to regain the independence and personal touch he feels only poetry can achieve. He says, “I’d sooner be able to communicate in exactly the way I want rather than somebody say well [you] can reach millions of people but I have to compromise myself. I’ve done that, I’ve done the compromise. I want to do the pure communication.” In it he covers everything from his family life with his wife Angela and their autistic son Johnny (whose artwork emblazons the front of the book) to his thoughts on science, nature, and fame.

When prompted for advice for young writers hoping to launch a career today he stressed the importance of originality. “There are so many opportunities now but you’ve got to have drive and stamina. You’ve got to have something to say which is why most of the good stuff is being done by the unheard voices. If you’re saying the same thing that’s been said for 600 years it’s not that interesting.” This approach helped to ensure the success of one of his earlier projects, The Royle Family, about which he states, “when we did The Royle Family it was the best depiction of working class people that had been on television because we were sick of seeing depictions of working class people on TV and thinking… well that’s not real.”

‘Raining Upwards’ launches on September 29 th at Manchester Central Library where Henry himself will give a performance. Copies of the book can be found at www.flapjackpress.co.uk. Readers wanting to contact Henry can find him on Facebook at Henry Normal and view more artwork by his son at Art By Johnny.