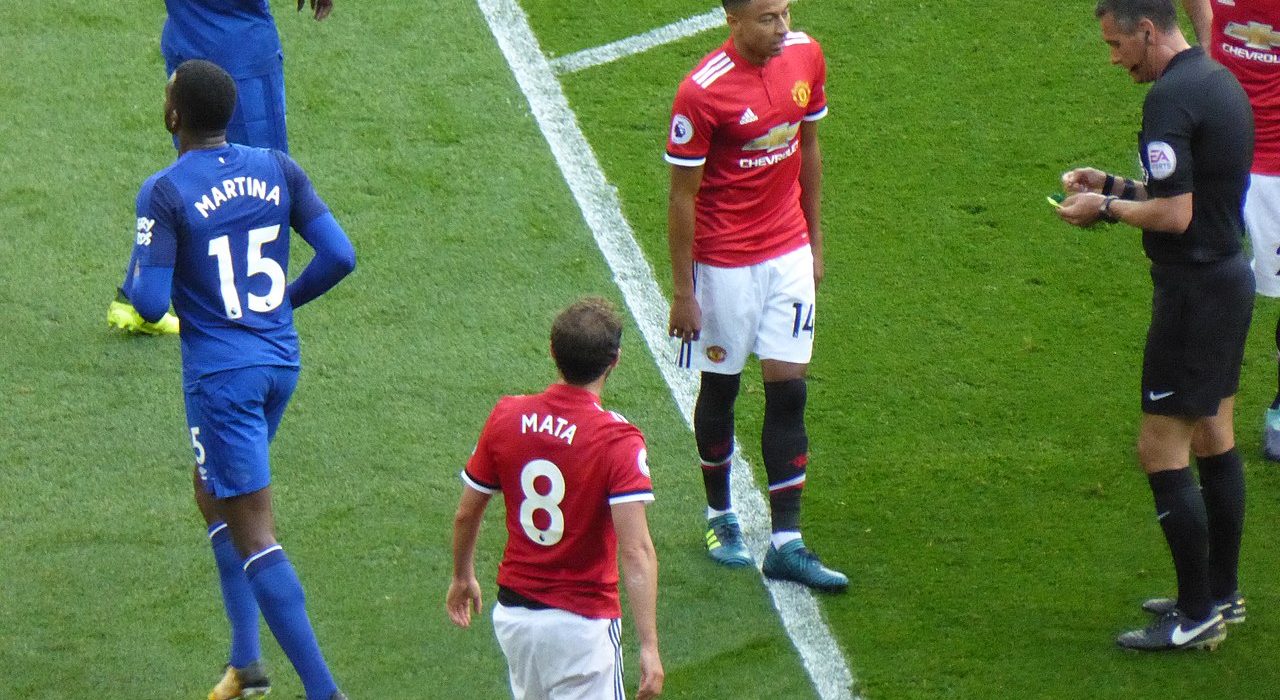 Ronald Koeman is something of a bogey manager for Mourinho. Throughout his career, he is the only manager Mourinho has played five times and not beaten. This looks destined to change though as Everton are winless in ten consecutive games and have failed to score in their last three.

United are flying high coming off the back of a comfortable 3-0 victory against Basel and make five changes from the team that played on Wednesday. Bailly and Jones return at centre-back, having not played during the week due to European suspension. Valencia comes in for Blind, Fellaini for the injured Pogba and Rashford for Martial. De Gea, Young, Matic, Mata, Mkhitaryan and Lukaku all start too. The Red Devils need to score five to go clear of Manchester City at the top of the table on goal difference.

Andre Marriner blows his whistle to start the game on a rainy Sunday afternoon at Old Trafford. Everton sit deep from the start playing five at the back with a row of four midfielders sitting just in front. Former red Wayne Rooney plays as a lone, isolated striker. Despite this defensive approach they start brightly, pressing quickly to try and force errors. United are unfazed by this and hold possession well.

The first chance comes in the 3rd minute as Matic takes control of the ball on the left-hand side of the pitch. There are three red shirts waiting in the box but instead, he crosses to Valencia on the edge of the 16-yard box. To the surprise of Everton’s keeper Pickford, his teammates and everybody watching the game, Valencia strikes the ball first time on the volley. Like an Oasis reunion, some things are just meant to be and the ball goes right into the top corner of the net. 1-0.

Rather than sit back and defend for the following 87 minutes like last season, United continue to have the lion’s share of possession. Mkhitaryan has a free role and keeps finding pockets of space in between the two rigid defensive lines with the Toffee’s looking unable to cope with the fluidity of play.

After 20 minutes Everton begin to settle and thread some passes together. Sadly they are a few stitches short of a quilt and their final third passing leaves a lot to be desired. Aside from a driven shot by Rooney that goes well wide, they have been unable to get into shooting areas.

United look content to play without the ball, letting the visitor’s push forward, creating large gaps on the pitch in the process. The pace of the forwards combined with their superiority in one on one situations leaves them incredibly dangerous even without the ball.

In a lapse of concentration, Leighton Baines passes it wide of Schneiderlin to Mata who puts Lukaku in on goal. Unlike the Valencia chance, everybody in the stadium would have thought this was a simple finish for the Belgian but he chips it just wide. A clear opportunity to put daylight between the two teams.

Soon after Martina breaks down the right-hand side for Everton and crosses in to Davies who, a couple of yards short of the ball, tries an audacious diving header. The header goes straight at De Gea and he came from an offside position but he deserves credit for his outside-the-box-while-inside-the-box thinking.

At half time United are deservedly ahead, although it should perhaps be two goals up rather than one. Mourinho will be very happy with his team’s performance even though Everton came out of their shell for the last 20 minutes of the half as their possession didn’t translate into concrete chances.

Koeman must have given quite the team talk as Everton storm out of the gates in the second half. They get rewarded for their effort too as a neat one-two by Rooney allows him to fire a shot away and forces a good save by De Gea.

As time progresses the United fans are becoming increasingly frustrated, their team deep sitting deeper and deeper. Thoughts of wasted leads and points last year are still fresh in their minds and having tasted the sweet nectar of 4-0 victories they don’t want to go back.

The players sensing this frustration kick it up a notch and play with a higher intensity. Mata whips a cross into Lukaku but a poor chest down leaves the ball just out of reach for him. Another wasted chance by Lukaku. Fellaini, or as some might call him the ‘Belgian Liam Neeson’ with his very particular set of skills, has a far better chest touch and probably would have converted it. Lukaku then changes his boots on the touchline, surely now he will convert his opportunities.

The first substitution comes in the 60th minute, Rashford off for Lingard. Rashford has been threatening with his pace but often lacked the final pass. He would suit a central role far better but will struggle to dislodge Lukaku for the places.

Pickford clears the ball appallingly, giving the ball straight to Mata. Williams fouls him just on the edge of the box to prevent a goalscoring opportunity and picking up the first yellow of the game. The free kick results in a Mata shot hitting the post. United pick up the pace now with Lingard and Matic both coming close with shots but ultimately not causing too much trouble.

Herrera comes on for Mata in the second substitute of the game. The Spaniard struggled with the physicality of the game, being easily barged off the ball.

Having already picked up a yellow card Williams makes a desperate challenge on Lingard inside the box, taking none of the ball but all of the man. Marriner gives no penalty but a second viewing shows it to be a clear foul and Williams should be becoming acquainted with the changing room showers. Following this Bailly gets a yellow card for sweeping the leg of Calvert-Lewin.

Williams’ game goes from bad to worse making yet another mistake giving the ball away to Fellaini. Lukaku receives the ball opts not to shoot but instead pass to Mkhitaryan who is in acres of space. The assister becomes the assisted and in pure FIFA style he finesses the ball past Pickford to make it 2-0 in the 83rd minute killing the game. Mkhitaryan then comes off for Martial.

Smelling blood, United pile on the pressure and Lingard is fouled by Baines on the edge of the box. Lukaku picks up the ball, fancying his chances. Immediately a roar of boos and whistles come from the away end — a disappointing sight to see. The free kick hits the wall and is deflected out wide to Matic. He controls the ball before crossing it in and like a Valencia shot from 25 yards out some things are just meant to be. Lukaku taps it in from three yards. As he celebrates he runs to the away end holding his hand to his ear, mirroring the disrespect. He has scored in five consecutive Premier League games now, equalling the record of Robin Van Persie and Louis Saha.

In the first of three minutes of injury time, Everton get a corner and commit all but two players forward, trying to at least stop the clean sheet for De Gea. Instead, they get caught on the break by the fresh legs of Lingard and Martial. Lingard takes on two, and then a third who slides in and uses his hand to stop the ball. The referee takes a moment before blowing his whistle, penalty to united.

Up steps Anthony Martial, with a perfect five from five penalty record. He sends Pickford the wrong way to make it 4-0. Everton have completely capitulated in the last 10 minutes of the game. A third goal this season for Martial, all as substitutes.

4-0 the games ends and United go joint top of the table. Fun fact time, if the season ended here there would have to be an additional playoff game between United and City to determine the winner of the league as the points total, goals for, goals against and goal difference are all equal.