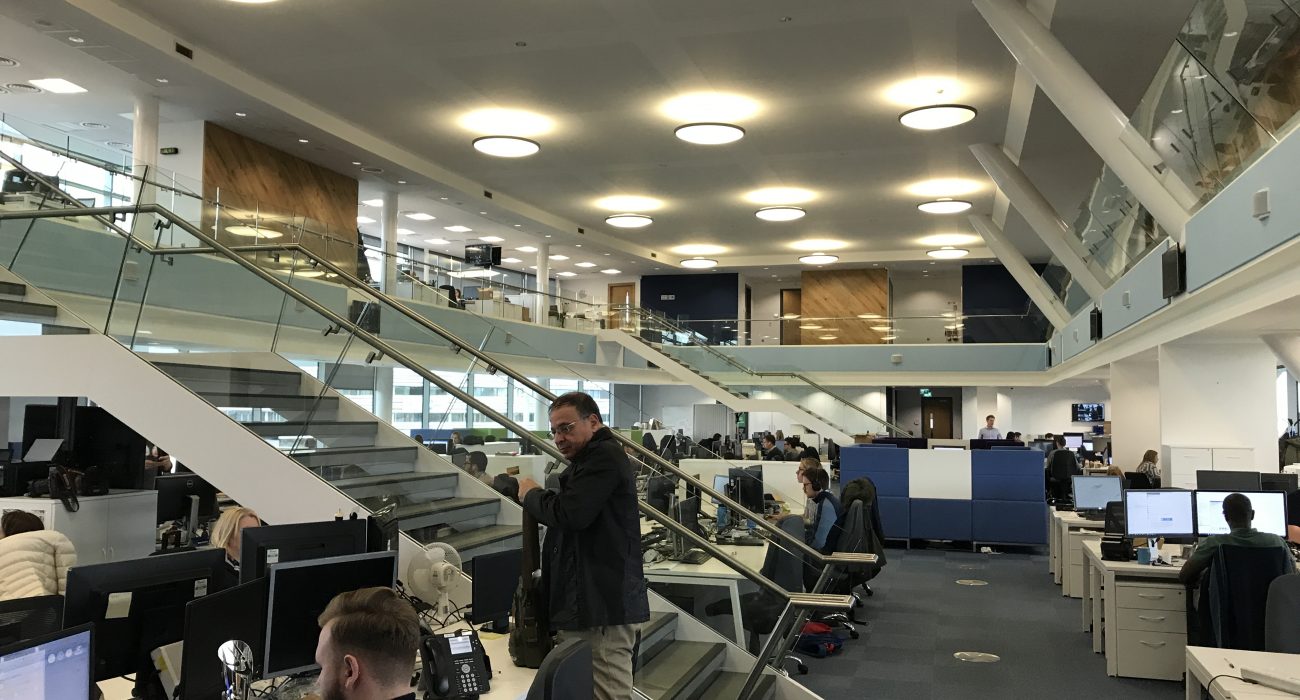 Behind the scenes at City

Upon arriving at the complex, you are greeted by a scale model of the Etihad Campus which gives a bird’s eye view of the stadiums as well as the surrounding area. I was meeting with David Clayton who is the Senior News Reporter at the club and he showed me around the media offices.

The first thing that hits you when walking into the offices is the sheer size of the operation. There are two floors with desks of computers and each portion of the media is grouped together. On the left, the windows look out onto the training pitches while on the right you can see the pitch of the Academy Stadium.

A stadium opened in December 2014 which hosts home games for the development squads as well as the women’s team.

The office is laid out with the various different sections seated at their own cluster of desks. City TV, social media, written word, international editions. Each department was grouped together but all within distance of each other in the idea of creating a cohesive team throughout. David spoke of how the club operates and what it strives to be. “More and more of our stuff now is video. Clips, social media, YouTube is obviously huge.”

Chris Parkes-Nield who runs City’s social media described what it is like being the team behind the tweets. The club has 5 million Twitter followers, close to 27 million Facebook followers, 5.4 million Instagram followers, and is preparing to hit 1 million YouTube subscribers so it shows you the size of the task to keep on top of everything but also how they strive for more.

Chris talked about how each platform is varied in what works well and to have a set plan for all would not be wise. “We’re totally fluid with how the platforms want to present themselves. If you have a rigid strategy at the start of the season and you don’t move from that, come the end of the season, the landscape’s changed. You’re going to be left behind. You have to be fluid and go with the flow.”

Football media is becoming incredibly social in the last few years and clubs like City now have a huge audience on a variety of platforms so there can be challenges in finding what works best on which platform. “Facebook’s generally moving into being a video platform. All the signs are there for that happening. We try to remain innovative, try to remain video first, engaging.”

City are one of the most innovative Premier League clubs when it comes to social media and Chris spoke of how they come up with fresh ideas. “You bounce off the audience. I’m a fan, I’ve been watching them since I was little boy so you inherently know where the line is. When we’re tweeting a gif of Alan Partridge to United last season, probably one of my finest moments! We know that there is a line. As far as keeping it fresh, you just have to keep abreast of the trends.”

The club also wants to encourage interactivity with the fans. “A guy yesterday tweeted us ‘can you tweet me a picture of Fabian Delph riding a dragon?’ In 15 minutes, we had it and put it back out. It just shows that we’re there and we’re in touch. We try our best to remain in touch with fan culture.”

Unusual transfer announcements were the trend of summer 2017 and City with their “announce Gündoğan” video were one of the firsts “With Gündoğan, we’re kind of to blame for all that. I’m glad it’s calmed down but it was crazy month with all these signings — each signing announcement more wackier than the last one. It was a weird phase but you couldn’t say it wasn’t interesting. As a culture, it was something.”

The club has 13 international sites with their own Twitter accounts, which highlights the blanket coverage City is aiming to achieve. The arrival of Gabriel Jesus to the club saw an increased Brazilian audience. Content Manager Paul Handler said “Most of the players are international so many of our fans are international, numbers wise.

“In any given match, we might focus on Kevin De Bruyne if he scores. However, our Brazilians fans may be more interested in Ederson’s clean sheet. You slice and dice it for your market because a lot of them follow players as much as teams.”

The room itself looks out onto the Academy Stadium pitch and this closeness was very much by design as explained by David “When it was designed, the idea was everything was together.”

The tour was a fascinating insight into how a club the size of Manchester City works on a global level and it became increasingly evident how the goal of being the best in all aspects is clear throughout the club. “Whichever area it is that we deal in, whether it’s Snapchat, Facebook, Twitter, Youtube, the idea is we become the best at what we do.”