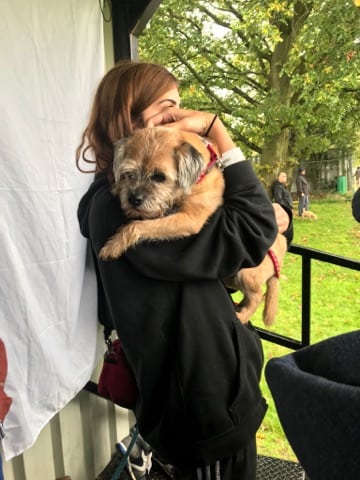 Dogs all over the shop at West Didsbury & Chorlton

The truly great ideas combine the ingenious with the obvious, the ideas you discover rather than invent. We’ve all looked at a Jackson Pollock and thought ‘I could do that’, but the fact is you didn’t, and he did. Their beauty is their simplicity and their blatancy, that he was the first to do what now seems so axiomatic. In such a category we can place the latest initiative from our friends over at Brookburn Road: Non-League Dog Day.

Of course! Of course Non-League Dog Day! Free entry with a mutt or a pooch at West Didsbury & Chorlton AFC. The post-punk indie miserablists Half Man Half Biscuit once noted that “even men with steel hearts love to see a dog on the pitch”. But how about 30, Nige? Some big, some small, some with scarves, some singing along and some just wanting to watch the game.

Of course the Sky Sports cameras were there to patronise the hell out of you, and their video report of the day is so very revealing. “Just another day in non-league football…”, the sequence opens with a clip of a man laying down corner flags while walking a dog, the voice over inviting you to chuckle at the old-timey ways of these humble, simple creatures from a bygone age. We are then asked to appreciate that it is “an initiative to bring much-needed funds to a club run mainly by its volunteers.” Ah, yes, those much-needed funds. If only Sky Sports could help at all, but alas, the company spunked all its money on a consultancy firm to tell them what a football supporter is and wants — the answer of course being a man in a bar scarf playing a one-two with his hatted son on the way to the match, thoughts full of 4-4-2s and 4-3-3s, and definitely content with the 40-odd quid he’s paying for the privilege of a late defeat at West Brom.

West Didsbury & Chorlton are a club with personality. It’s becoming a very valuable commodity in non-league football, with what I suspect will be an ever-rising deluge to the regional divisions of Premier League supporters who can’t stand anymore because they can’t stand anymore. The average Mancunian can already visit Salford City or FC United of Manchester, clubs with very strong and very distinct identity, if he or she wishes to remind themselves how fun football is. They’ve also got Stockport down the road if they want the opposite experience. It’s a credit to West that they have been able to get themselves noticed, with a supporter culture perhaps closer to Dulwich Hamlet in South London rather that any of the local non-league big boys.

West are a ‘trendy’ club. Now. I would like to make clear at this point that I am not Rod Liddle. I do not think that football supporters forming a progressive political climate around a non-league club is anything other than a positive for the game. I do not think that it is alienating to the long-standing, semi-mythical, Bovril-supping traditional supporter — any long-standing fans of clubs with a recent surge in attendance figures that I have spoken to have been delighted at the effect of atmosphere and revenue. I also do not think that it is a middle-class phenomenon, a lazy accusation often thrown at clubs successfully engaging their communities, as if one could infallibly infer a person’s economic relation from choice of flag, drink, nail colour, whatever. Hats off to West Dids. and all that follow them.

Excepting the Northern League (whose declination to become a feeder league to the Alliance Premier in 1979 for parochial reasons left it at a level that it was, and is too strong for – eight of the nine most recent winners of the FA Vase have been of the Northern League), the North West Counties Football League is arguably the strongest at Step 5. I’m used to Essex Senior stuff and the step up, though actually a step across, is undeniable.

Squires Gate were the visitors on Saturday, 22nd in a division of 23 and having lost 14 of their previous 16 fixtures. West, on the other hand, sitting in 8th, were eyeing up that ambiguous second promotion place, a place that, due to another year’s restructuring, no-one I spoke to quite understood. But, there it is on the table, a second dotted line that bisects the Runcorn Town / Runcorn Linnets duopoly and separates them from the rest.

West play a very attractive attacking style, perhaps accentuated by some flimsy defence, but not greatly so. Steve Settle’s side had scored four goals in each of their last four games before Saturday and, on the evidence of the first 20 minutes you’d have bet on them doing so again. You’d have been right. It took only three to take the lead, Ben Steers with an awkward cross that no-one, including ‘keeper Mike Hall, was able to get on the end of. Squires Gate really needed to weather the following 20 minutes to keep the game alive but lasted only another 15 before Steer finished for two, Tom Bailey putting him through with a ball that humbled the Gate’s centre halves.

It wasn’t a pathetic performance from Squires Gate. They didn’t wilt, even with a canine collective on their backs, but the quality wasn’t there. In some noticeable rain they dug in, seeing it through to half-time just the two down. 2-0 down after twenty minutes is just as bad as 2-0 down after an hour, but somehow it doesn’t seem so. West remained on top but Gate were beginning to sneak up the pitch, so it was with some relief for home supporters when Matty Kay headed home from Steer on 73 minutes. Another Steer classic ten minutes later found Tom Bailey, who took the score to a more accurate 4-0.

West may have scored 24 goals in their previous six games, but they also conceded 18. Their defence was caught complacent and, perhaps, cold, when a late rally brought two goals back for Gate. The first, a beautiful post-clipping drive from 25 yards out from Jack Williams, the second an equally beautiful (in a different way) goalmouth scramble resulting in an own goal.

4-2 might have slightly flattered the visitors but hey, who’s counting? A highly entertaining day out in the Hallmark Security League, and a shame that the Sky Sports cameras pissed off after ten minutes. West move up to 7th in the league, and if they do push on to promotion into the giddy heights of the Northern Premier League Division One North, they’ll miss afternoons like this.