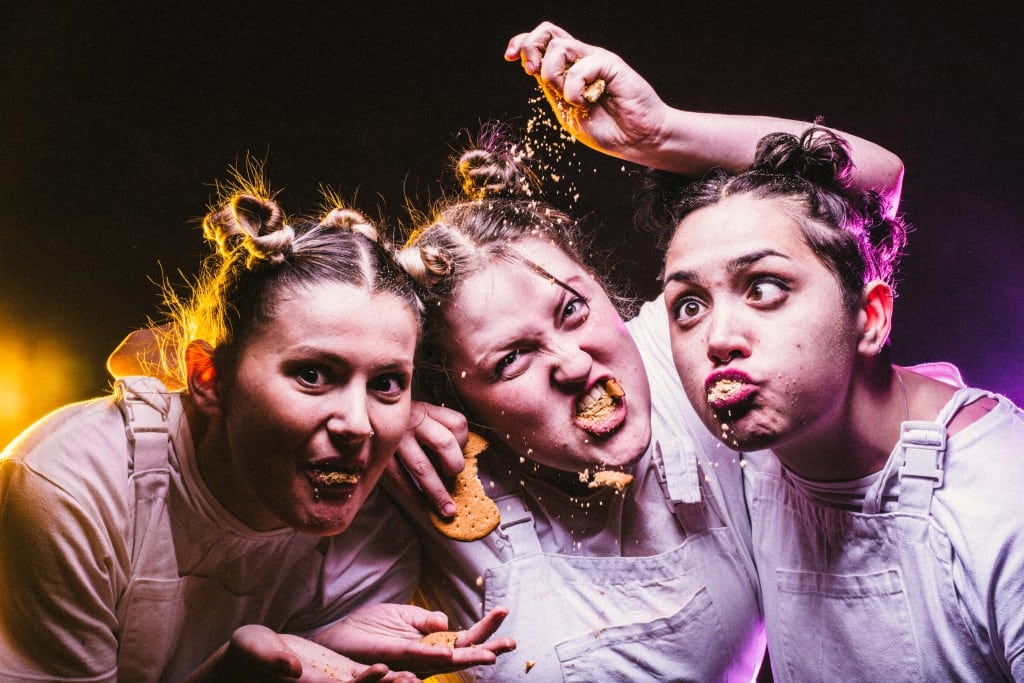 Interview: In Bed With My Brother

In Bed With My Brother’s We Are Ian is hard to describe. Part dance party, part political theatre, all loving tribute to acid house, it’s an extraordinary night out that feels so utterly Mancunian. It’s surprising then that the run at HOME from 12th-14th October will be the show’s premiere in Manchester. “A lot of people assume that we are from Manchester,” Kat, one-third of the company, tells me. “I think one of the things though is that we don’t speak, so Ian’s voice is the only [one] heard in the show. So even though the show’s about Ian, people automatically assume we’re Mancunian as well.”

In reality, the trio — Nora, Dora and Kat — met at Exeter University where they all studied Drama. “We were like, we don’t want to be actors but we want to carry on performing [after we graduate] and so we just decided to do it.” The first thing they created as a company was a show called Twinkletoes, which they performed in an Edwardian toilet in Bristol. Kat notes, “it wasn’t necessarily a show, it was more of an installation. It was a bit of a bouffon-y thing.”

The advice they have for other young creatives mainly boils down to: you can’t have fun until the admin’s done. “How we’ve got to do stuff is just from applying to loads of opportunities […] the most opportunity you’re gonna get is when you’re emerging.”

“We got the opportunity to go to Edinburgh in 2016 because we were awarded the Charlie Hartill Fund for Theatre from the Pleasance, which is a really great opportunity for young companies to just take up work to Edinburgh. If you’re really passionate and you want to make work, just find those opportunities and write shit-hot applications.”

So how did We Are Ian come about?

It’s important to note, first of all, that the eponymous Ian is Dora’s stepdad. “We started making this show because a couple of years ago we just wanted to make a show, and Ian asked us if we’d make a show about him.” Whilst they can’t recall much about the early devising process, it was Ian’s voice that drove the development initially. “Ian’s voice is one that isn’t really that heard on stage, and so it was a really big thing for us when we started making the show that we really wanted to have [his] voice as the only one heard on stage.”

The show is entirely about and inspired by Ian, with not only his recorded voice making up the monologue we hear throughout the show, but also his music choices playing throughout the entire hour. “[The music] gives you a feeling of the time but also makes you think something about the time without us having to say something explicitly,” says Nora. What is interesting about the music choices is that you can track the changing era, the introduction of darker themes in the tracks, and the changing mood of the show itself all through the specific music decisions made.

Gender in We Are Ian feels like an afterthought: In Bed With My Brother are only a feminist theatre group in that they are three feminist women occupying a theatrical space. They say of Ian’s story: “We didn’t want this to be anything about gender, we didn’t see it as a statement that three women are telling his story because it’s more than that.”

In their minds, We Are Ian is a political show, although it didn’t come off that way to Ian and everyone involved in the acid house movement. Links between the movement and Thatcherite neoliberalism weren’t made until later.

“[They] never thought of it as being a political action, [they] were just getting together and having a nice time and partying and dancing and that brought everyone together.”

“In a time now when everything is so politically-driven, everyone is so opinionated…there’s still a massive divide…we want people to be able to take away from it what they want. Some people are able to tune into the political things that we’re trying to say…and some people just really like partying, which is fine and great as well!”

Whether you want politics or partying, tickets for We Are Ian at HOME can be purchased here.

Tags: HOME Theatre, in bed with my brother, interview, Manchester, orbit 2017, we are ian