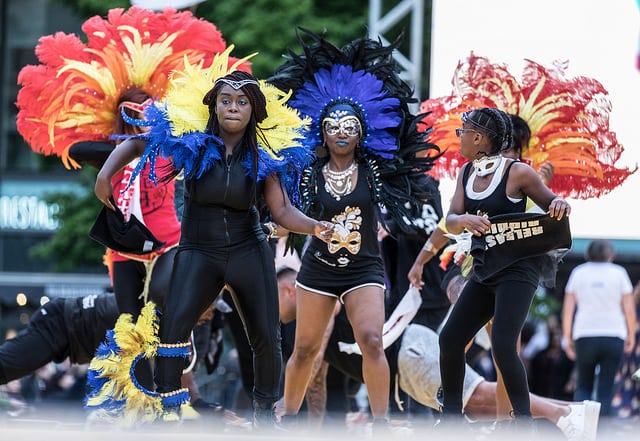 This year Manchester’s biennial International Festival enjoyed success as the 18-day event brought a record-breaking £40.2 million into the local economy, up from just under £39 million at its last outing in 2015.

The 2017 event was seen by bigger audiences than ever before with over 300,000 spectators attending the festival, which featured over 380 performances of 32 different commissions and special events.

This year was the sixth edition of MIF since it was first established in 2007, and the first under its new artistic director John McGrath. It included a more productions than ever before and an increased amount of free events, which is thought to have been a major contributor in drawing its largest ever crowds.

Perhaps most gratifying of all for the festival’s organisers was the unparalleled level of engagement from the local community, as Manchester’s residents pitched in to help cement the event’s status as fundamentally rooted in its Mancunian setting.

The festival opened with a celebration of Manchester, with over 100 residents invited to walk a huge catwalk in Piccadilly Gardens. Local engagement in MIF productions grew dramatically this year, with over 28,000 hours logged, a three-fold increase on 2015. Programmes such as Jerwood Fellows and Creative50 helped emerging Manchester artists stake a real claim in this year’s event.

Working with 68 different education partners, more than 4000 people also participated in the Festival’s Creative Learning programme, which was expanded significantly.

John McGrath, Artistic Director and CEO of MIF recognised the city’s central role in the event’s success: “Everyone has spoken of how special Manchester felt… This engagement with place and local stories was often cited by our international visitors most as one of the things they most appreciated about MIF17.”

Whilst the festival is firmly embedded in Manchester, it remains a truly international celebration. Artists came from a wide array of nations, from China to Iceland to Germany. At least 11 of the shows featured at MIF will go on tour to destinations as far-flung as Sydney, Vienna and Hong Kong.

The festival’s international reputation as an incubator for new, up and coming emerging talent continues to grow – part of this year’s success was the significantly stronger online imprint it made. Digital engagement with creative content from the MIF reached 1.5 million people around the world.

Sir Richard Leese, leader of Manchester City Council, was buoyed with the festival’s success. “Manchester takes centre-stage at the heart of a cultural revolution that will be unrivalled in the UK and beyond.”

“The maths alone confirms our belief that cities need culture, as much as culture needs cities like ours that continue to support, nurture, and positively embrace all that the arts have to offer.”

After a fantastic year in 2017, Mancunions can be very excited about the festival’s next outing, which takes place from 4 – 21 July 2019.