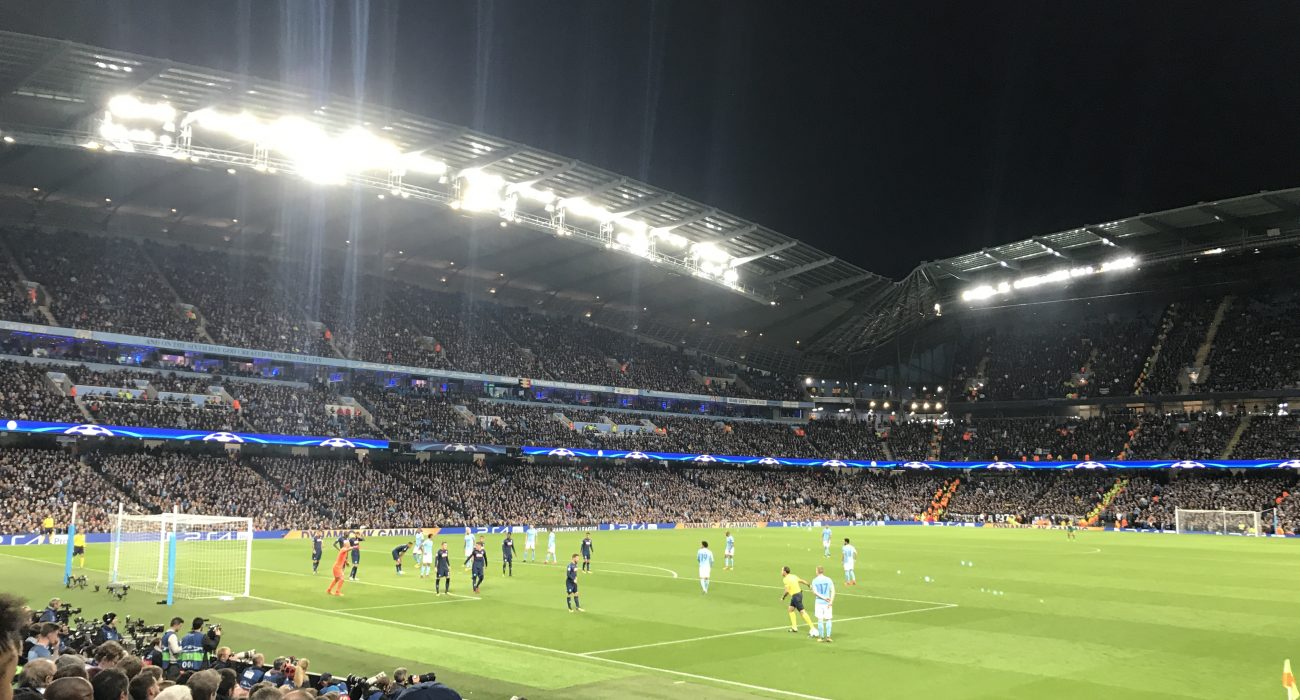 Manchester City started this game where they left off with the last. The confidence provided by their 7-2 hammering of Stoke at the weekend was evident from the first whistle. In contrast to previous European nights at the Etihad, City started brightly. Moving the ball with pace and purpose, they were quick to dismantle the fluid Napoli defence.

Raheem Sterling was the first name on the scoresheet having put his side ahead in the opening ten minutes. Leroy Sane was directed by the pointed finger of David Silva as the German fed the ball into the path of the Spaniard. Silva, nearing the byline, cut the ball back to a queue of City attackers. Jesus dummied, Walker scuffed, Sterling finished.

Next was the turn of the most in-form player in the Premier League as Kevin De Bruyne beat his man on the right-hand side and slid the ball to the feet of Gabriel Jesus. The Brazilian took the chance with joyful glee as he netted his fifth goal in seven days.
2-0 and fans were sensing another mauling. It is a testament to how far City have come that this all seemed quite normal.

After the second goal, two men behind me began to chat of which chippy to visit on the way home. Pep Guardiola has installed an elite mentality into both his players and the fans.

City continued to probe with the next chance falling to De Bruyne. Sane found an arriving Belgian on the edge of the penalty area and De Bruyne wrapped his foot around the ball. The curling effort hit the underside of the bar but the ball bounced down and then away from the goal.

Guardiola will be less pleased with the way his side struggled to cope against an athletic, possession-wise Napoli once the Italian side found their feet. Seemingly unfazed by the quick one-two of City’s opening goals, Maurizio Sarri’s progressed back into their usual game. A high press that looked to release Mertens, Callejón and Insigne.

The pressure worked and City’s back four began to make mistakes and conceding possession. Fabian Delph routinely drifted centrally from his left back spot and was guilty on more than one occasion in giving the ball away.

With half-time approaching, Napoli had their way back into the game. Kyle Walker rose alongside Raúl Albiol to meet a cross and foolishly wrapped his arms around him. Both tumbled to the ground and the referee showed no hesitation in pointing to the spot.
Dries Mertens, a man who has seven goals in seven Serie A appearances this season, stepped up to take the penalty but saw his attempt saved. Ederson dived to his right but found his legs long enough to deflect Mertens’ central effort.

In truth Napoli most likely deserved a goal but they continued to peg City back in the closing stages of the first half. Unlike the opening minutes of the first period, the second half started in a calmer manner. Napoli were still seeing plenty of the ball but City did well to marshal them and keep them away from their penalty area.

City were drawing ever nearer that 90-minute mark and the chance to maintain their 100 per cent Champions League record this season but in the 72nd minute, the Italians were again given a chance back into the game.

A clumsy leg from Fernandinho collided with Faouzi Ghoulam and referee Antonio Mateu Lahoz again pointed to the spot. This time, there was no mistake. Amadou Diawara hit the ball low, hard and into the corner meaning that although Ederson dived the right way, his fingertips couldn’t reach the ball.

With now just one goal separating the two sides, City found themselves facing a nervy final 15 minutes. Looking to restore their lead, Gabriel Jesus, who had become increasingly isolated, managed to put the ball in the net but was judged to be offside when receiving De Bruyne’s pass.

Despite threatening, Napoli did not find the equaliser and the full-time whistle blew at 2-1 and with City maintaining a perfect start to the Champions League this season. Post-match, Guardiola continued the pre-match Napoli love-in. “One of the best teams I ever face in my career. No doubt about that, maybe the best.”

It was an important win that showed another side of City’s character. Not every game is going to be a 7-2 and the team needs to know how to maintain narrow leads if they want to progress far in this competition. City’s next Champions League will be the return leg in Naples on the 1st of November.