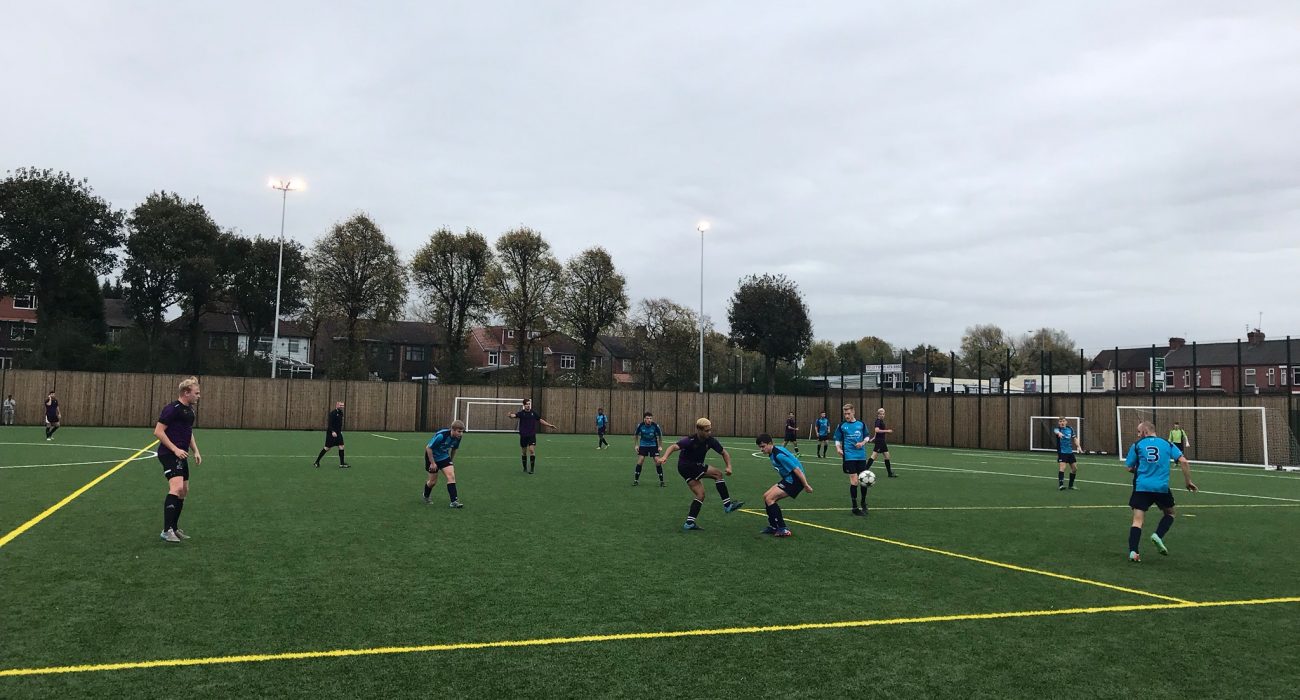 Following the disappointment of their 4-0 away loss at Newcastle last week, University of Manchester’s Mens 1st team were looking to bounce back with their first home tie of the season against Liverpool John Moores. The Armitage welcomed the players along with an overcast sky, but there was no threat of actual rain.

The game started as an even contest, both teams struggling to get maintain possession, with many long balls being played forward. The first effort of the game came from Manchester’s number 8 but he could only direct it over.

The majority of Manchester’s attacking threat was coming from the number 10 who was occupying the right flank. His pace was allowing him to get in behind the Liverpool fullback, and a good cross was causing them trouble.

Number 5 was also proving an attacking outlet for Manchester. First, his long-range effort was deflected for a corner and moments later he dragged another attempt wide of the left post.

After a spell of Manchester domination, Liverpool finished the first half strongly. Creating chances through their number four and number seven. But like Manchester, these openings were more half-chances than clear goalscoring opportunities.

The half time whistle blew at 0-0 with both sides reasonably content with what they had seen.

The second half was a different affair entirely. Liverpool started with an urgency that both teams were lacking in the first period and grew into the game as it went on. The goalkeeper was forced to make a great instinctive save after Liverpool’s number ten fired a shot goal bound. The close-range effort came from near to the penalty spot and the keeper did exceptionally well to push it wide.

Manchester were finding it increasingly difficult to maintain possession as Liverpool picked up their pressing efforts. The away side were forcing Manchester into giving away the ball easily whether that was through misplaced passes on the ground or overly ambitious long ball attempts.

Liverpool’s pressure and overall second half performance were rewarded in the 70th minute as they got the game’s only goal. Their number 8 turned in the penalty box and fired his effort low into the bottom right corner. The speed of the ball from such a close proximity meant the keeper had no chance of keeping it out. The away side took the lead and you have to say it was deserved for their second-half performance.

With time running out, Liverpool marshalled the game well. Slowing down play and making it difficult for Manchester to gain any momentum in their quest for an equaliser. The travelling team saw out the final stages of the match to take three points back to Merseyside.

It was a disappointing defeat for Manchester as they find themselves bottom of the Northern 1A table. They look to bounce back on Wednesday with an away trip to Liverpool Hope.