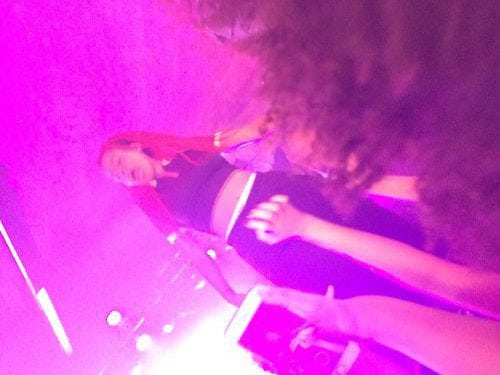 Guernsey-born DJ and SoundCloud veteran, Alex Crossan, otherwise known as Mura Masa, headlined one of the biggest sets the Warehouse Project has seen all season on the 21st October.

That Saturday it was the turn of Anchor Point, Mura Masa’s own label to take control of the lineup and create its own unique blend of grime, trap, soul and electro beats. One masterful track followed another and throughout the night the atmosphere within Warehouse Project could only have been compared to the main stage at Glastonbury festival.

The 6-hour event did contain some rather confusing names. The combination of the gentle, yet hypnotic vocals of Bonzai was to be followed by 67, a rap and hip-hop group who call themselves the ‘rawest crew in UK rap.’ This is in itself questionable, and yet it didn’t feel mismatched at all. In fact, the mix of genres just hyped the crowd even further (though the introduction of 67 did make it harder for people to move or breathe.)

Nao, one of the artists on Crossan’s own label, withdrew from the event at the last minute due to an illness, leaving Bonzai as the most stand out performance apart from Mura Masa himself.

Her mellow tunes, powerful lungs, and mesmerising movements saw her control the crowd in a way I’ve only ever seen replicated by Beyonce. Her dance and electronic tones seen in her hit song ‘I Feel Alright’ were only matched by her own dancing skills. Her energetic, enigmatic energy was such that she seemed to rally the crowd more so than the next performers, 67. She came on throughout Mura Masa’s own set also due to her influence on his tracks ‘What If I Go’ and ‘Nuggets’ and was met each time with a bigger, louder, more rib-crushing surge from the crowd. If anything, she was the standout performer of the evening for sure.

67 were next, with their mysteriously masked lead and their grime and hip-hop rhythms they created a stark contrast to what had come before and what would succeed them. It was during their set that I experienced the most mosh-pits, but I found that if you just held yourself tight and bounced you’d come out the other side pretty much unscathed. However, I would say these were my least favourite of the night.

The transitions between each act did take about 25 minutes each time, and this caused more and more irritation throughout the crowd and the introduction of 67 wasn’t announced clearly so no one was sure that they’d actually started their set until they’d been on stage for about half an hour…

This poor organisation can be said to be the only flaw of the night and can be said to be down to Mura Masa’s use of live instruments which within themselves needed more sound checking. It just did feel weird for a steel drum to be tested and then lead into the hip-hop rhythms of 67 without any other announcement or starting signal. However, they served their purpose to hype up the crowd and the 25 minutes in between the end of their set and the start of Mura Masa’s felt like an age, with the crowd rallying more and more, so much so that two girls next to me starting physically kicking and punching each other so that one could conquer and stand in front!

However, this push only surged further when the clock struck 2 am. Everywhere but the main room of WHP became dead as every eager fan tried to shove their way to the front. The genre of Mura Masa itself was not one which would have initially sparked ideas of mosh pits and fighting and yet the desire to get as close to him as possible kicked in and caused a surge of aggression from every person in there.

I’m not ashamed to say I, myself was included in this when a 6ft 4in lad tried to stand right in front of me and I not-so-politely moved myself around him. ‘Messy Love’ was the first of Mura Masa’s tunes to fill the packed room and the scream was like nothing I’ve ever heard. The chanting was such that on my leaving later that evening (early that morning) I had fully lost my hearing in one ear — a side effect that lasted a good couple of days. Mura Masa finished his set with his most famous song ‘Love$ick’ which detonated across the room and had all of us screaming at the top of our lungs and swaying out bodies like we were possessed.

Mura Masa’s steel-drums, classic drums and synthesiser vibes are miles away from the auto-tuned vibes of other electronic dance music that is circulating the dance scene at the moment. Having seen him in 2016 at Glastonbury music festival, his performance at WHP can only be said to show him to have gotten even bigger and even better.

New collaborations with people such as NAO, A$AP Rocky, Charlie XCX and Desiigner show Mura Masa to not only be mastering the music industry with his mix of beats and genres, but also shows his industry intelligence. The creation of his own record label Anchor Point, and some could claim his own niche, at just the age of 21 sees him to be in a strong position to take over the music scene itself. If anything, Saturday showed that Mura Masa is a force to be reckoned with — he sounds great both on the bus and on the dance floor… Just don’t go if you value your hearing!